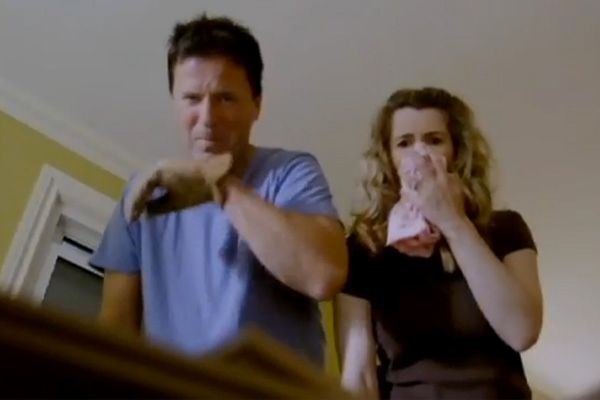 Who Is This Now? Mae and Harris Greene.

Why Are We Watching Them? They’re telling the story of an unfortunate discovery in their new home.

How Did They Get Here? They decided to buy a house in the relatively rural area of Steamboat Springs, Colorado, which apparently is a haven for skunks.

What’s the Grossest Thing We See? Given that the issue is skunks, and the odors that arise from same, it’s less what we see than what we hear. We learn that catching eight skunks that have been living under the Greenes’ house doesn’t mitigate the stench in the house — which is so bad that it causes nausea and migraines in the house’s human residents — so the original exterminator who’d caught the skunks from under the house recommends skunk specialist Jake Trujillo, who believes the cause of the odor is actually a dead skunk under the house. But when Jake sends his dog Carly, who’s been specially trained to recover skunk carcasses, under the house … whoops, Carly gets sprayed by a skunk that’s very much alive. Ultimately, Jake determines that the only way to get to the space under the house is to rip up the floor of the house, whereupon he and the Greenes discover “a labyrinth of tunnels under the floors,” which have to be destroyed or else new skunks will continue to find them and colonize the house. In the process of breaking them up, they also find the dead granddaddy skunk that has been the cause of all the problems. Dead skunks are an issue because the stink they produce is “not just [from] the rotting flesh, but the perpetually oozing spray gland as well.” PERPETUALLY OOZING.

What Have We Learned? Sometimes, humans can triumph over nature — but in the case of the Greenes’ problem, doing so — by which I mean making their house livable — took nine months.

Who Is This Now? Amanda Bobbin.

Why Are We Watching Her? She’s walking us through the preparations she and her family are making for a postapocalyptic disaster.

How Did She Get Here? Amanda believes that a spirit named Greta has guided her from Florida to a house in the Smoky Mountains, which the Bobbins have dubbed “Paragon Jewel,” where they will need to live in order to survive a comet striking the planet.

What’s the Grossest Thing We See? Amanda claims she had never even heard of prepping before Greta started telling her what to do. She also claims that when they found this house (or, rather, when Greta guided them there), it was already full of such prepper staples as toilet paper, food dehydrators, gas masks, and seeds for sowing the kinds of plants that will attract small game. This lady is raising two young boys and believes in a doomsday-prepping angel, guys. Should we call CPS?

What Have We Learned? In the event of the comet strike Greta predicts, Amanda and her husband are committed to opening their home/fortress to their neighbors, so apparently not all preppers are selfishly paranoid. Just most of them.

Who Is This Now? Dayna, Frances, Veronica, and Alana.

Why Are We Watching Them? They’re showing off their fabulous lifestyles and/or the evidence of cosmetic procedures they’ve had done or are in the process of having done.

What’s the Grossest Thing We See? The worst things we see: Veronica in the office of her husband David, “The Vagina Man,” getting a G-shot, which is an injection of some kind of acid to enhance female sexual pleasure … and for some reason Alana is there? Later, Frances throws a housewarming party at which she takes a spin on the stripper pole for all her guests to see, ending with a full lap dance performed for/on her ex-husband Ryan (who, by the way, divorced Frances because he wanted to date other women, plural). When Frances’s daughter Pablynie follows her mother onto the pole, Ryan throws bills at her. At his ex-stepdaughter. After he’s already told us that, since his divorce, he’s mostly dating women Pablynie’s age. Dayna wins the prize for the grossest things we hear: “I have a vagina that looks like two soy hot dogs with a bad carpet”; “I have meat curtains”; “I pee my pants all the time!”

What Have We Learned? I never thought I would want to undergo an elective cosmetic procedure, but if you get Botox in your armpits, you won’t sweat for three months? INTERESTING.

Who Is This Now? Jane.

Why Are We Watching Her? She’s contacted “America’s Supernanny,” Deborah Tillman, for help with her children.

How Did She Get Here? Two years ago, Jane divorced the father of her five (five!) children, who range in age from 3 to 10. During her marriage, Jane’s husband was the primary disciplinarian, so since his exit from the picture, she tried to adopt a different strategy: “I wanted to raise the kids under a love-based approach.” It’s not working out.

What’s the Grossest Thing We See? It’s hard to pick out which of the kids’ modes of misbehavior is worst, because they are, frankly, a bunch of monsters. (It’s not clear whether Jane works outside the home, but for her sake, I hope not; it would be hideously embarrassing for her to leave this bunch of jerks in anyone else’s care.) But I guess if I had to narrow it down, I’d go with the moment when 3-year-old Isaac calls his mother a “f—hole.”

What Have We Learned? Jane’s is a cautionary tale that you should double up on birth control. In fact, maybe go triple just to be absolutely certain.

Who Is This Now? Dayne.

Why Are We Watching Him? His mother, Shannon, has called behavior expert Josh Shipp for help in improving his attitude.

How Did He Get Here? Dayne, now 15, has been an angry kid his whole life; he’s never gotten along with his stepfather, Mike, whom Shannon married when Dayne was 6. By the time he was 11, Dayne was so unruly that Shannon committed him to an inpatient program for kids with emotional problems, and though his program was only supposed to last 45 days, he ended up staying there 14 months. Dayne later started using drugs, claiming that he hasn’t gone a day without smoking weed since he was 13. And now he’s graduated to robbing drug dealers to finance his own habit.

What’s the Grossest Thing We See? Josh arranges for Dayne to meet Aaron, who, after an OD, suffered several strokes and a heart attack, leading to a coma. When he awoke, Aaron had sustained so much brain damage that he now uses a wheelchair, can’t speak, can barely use his arms, and is completely dependent on his mother to perform the most basic functions for him. As bad as it is for Josh to use Aaron as a human prop to make his point to Dayne, Josh then goes on to tell Dayne that he will have to immobilize his arms and legs with braces and use a wheelchair for 24 hours to experience what may happen to Dayne if he doesn’t straighten out his life. Basically, it’s the drug-addict version of when skinny people put on fat suits to learn empathy in the most stuntish, condescending manner possible. And while we’re talking gross: I’m also not a fan of Shannon’s chevron French manicure.

What Have We Learned? It’s awful when a teenager is so unruly that a parent feels the need to call in a pro. But when tales of the teen’s horrible behavior are delivered in a thick Boston accent, those stories are automatically kind of hilarious.

Who Is This Now? Diana.

Why Are We Watching Her? She has to clean up her hoarded house, or else city authorities will condemn it.

How Did She Get Here? The causes of her depression, and hence her hoarding, are rooted in her abusive childhood; she later repeated the pattern by marrying a man who abused her and her children. Now, she says, she’s become secluded, and finds it “comforting to have things around” her.

What’s the Grossest Thing We See? Somehow worse than seeing animal feces on every corner (and soft furniture stained with urine I hope is from animals) is seeing Diana finish a meal standing in her kitchen and then toss the styrofoam takeout container onto the pile of garbage. Obviously, I realize that’s how the hoard grows — one takeout container at a time — and yet the fact that she has no compunction about just tossing her garbage wherever even when she’s on camera just demonstrates how little regard she has for her environment and is really depressing.

Tara Ariano is a f—hole.

Counting Down the Top 10 in … NIGERIA!