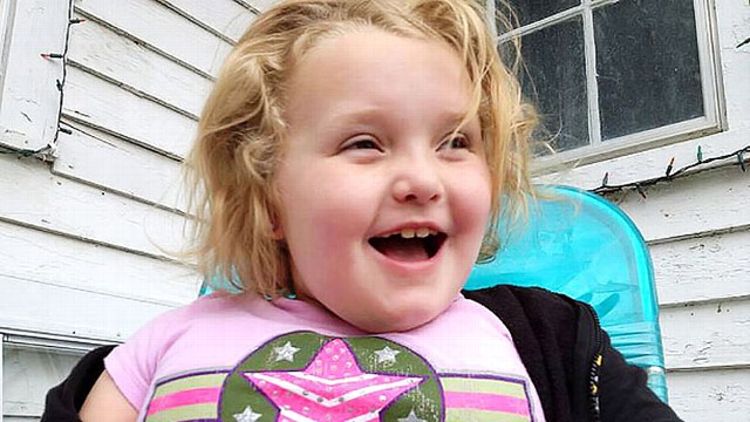 In the Season 2 premiere of Here Comes Honey Boo Boo, we reencounter the Thompson family in their modest home of McIntyre, Georgia. Despite their worldwide fame, they still reside in the same small, overcrowded house with a sectional sofa that doubles as their dinner table. It doesn’t help that Chickadee gave birth to the new character Kaitlynn at the end of last season, but the family is grateful for their new addition without harping on the same tragic themes as rival show Teen Mom. The family is up for the challenge of the new addition despite the constraints of their space. While series writers could have opted to move them to a new location where they dealt with their fame and increased fortune for a Beverly Hillbillies effect, the team was conscious of maintaining a sense of relatability to the general viewer. In an economic climate where banks are apprehensive about lending to unqualified applicants, the idea of the Thompsons moving does seem far-fetched after their sudden rise to fame.

A few things have changed since Season 1. June “Mama” Shannon has lost some weight and is sporting a new blonde look, perhaps attempting to play into the Real Housewife culture that plagues many women on television these days. While the show is named for the pageant girl Alana “Honey Boo Boo” Thompson, Season 1 mainly revolved around June. She has long been the voice of the show and an important maternal figure who keeps the family together. It is clear that Season 1 had a feminist agenda, promoting the idea of a household functioning with a male in the slave role, while the women were the collective master of the house. It wasn’t about a pageant family as much as it was about the power of women in the American South. The father, Mike “Sugar Bear” Thompson, who works seven days a week, was often portrayed as a one-dimensional male without any emotional depth.

The plot of this season’s first episode revolves around June taking her daughters’ smartphones away because of overuse, confiscating them and placing them in an empty bin of cheese balls. Can they live without the device that connects them to the world? In light of Edward Snowden’s recent NSA leak, June’s desire to wean her children from cellular communication and social media is a vigilant action evoked by her maternal instincts. June is quick to admit that she, too, uses her smartphone frequently, often holding it close to her face to see the screen. While June is legally blind, the director of Here Comes Honey Boo Boo likely encourages this action in order to drive home the point that we have become lost in a vortex of information on the small screen without even considering the physical, mental, or proprietary implications. The long-term repercussions of staring into a screen could leave the majority of working Americans blind in the years to come.

In order to get out of the house, the family goes to a local wrestling match where Sugar Bear works security. When meeting with the wrestlers, the family brags of their signature wrestling move: the Cup-A-Fart. The move involves farting into your cupped hand, placed right over your bottom, then bringing the “cup of fart” into your opponent’s face, knocking them down with a horrible stench. It has long been accepted that human flatulence is the result of eating unnatural, processed foods that your body can never break down. In a way, the Cup-A-Fart demonstrates that we are killing ourselves and others with the excess of unnatural foods in the American diet. High fructose syrup, trans-fats, and excess of salt could be ruining our bodies. In a way, we are Cup-A-Farting one another and ourselves every day that we make poor dietary decisions.

After the wrestling match, the family receives word that a hog was run over on a nearby highway. The family opts to name the dead hog “Logan,” and continues to butcher his body in order to have a fulfilling supper. The theme of reusability and sustainability has been a necessary trend in modern cuisine. How can we supply quality food for the greatest number of people for the least amount of money? While roadkill is frowned upon, you can’t deny the idea of sustainability that is instilled by the Thompson-Shannon family. Whether it is by means of extreme couponing or making pork-‘n’-beans with road-killed hog, the family strives to minimize their carbon footprint. It is something all American families should strive to do.

Bored without their cell phones, the children are forced to create their own fun. They dress in garbage bags and rub themselves down with Country Crock butter. While they slide around the kitchen floor, dirtying the cabinets and the new stainless steel refrigerator, you can’t help but think of the amount of butter utilized in American cuisine. Whether you are making a vegetable or a protein, there is usually a disturbing amount of butter or margarine overwhelming your taste buds. As the three sisters continue to slip-‘n’-slide through their mother’s extreme couponing haul storage center, they are therapeutically confronting a key contributor to their weight gain. Perhaps they have realized that despite its flavor, they will not be able to eat Mama June’s famous sketti without obesity or diabetes catching up to them. Flopping around like beached whales, they are embracing activity and movement before old age and weight gain dramatically limit their mobility.

One of the more interesting but underexplained aspects of Honey Boo Boo has been June and Sugar Bear’s relationship. They never married, despite Sugar Bear’s acceptance of June’s three daughters (and now granddaughter), who are not his own. Things have already changed dramatically in Season 2. Sugar Bear is becoming a more vital part of the show, which is relying on his evolution as a character into a strong, emotive man who can take over “alpha dog” status from the collective female master of the house. He can no longer be a supplementary figure in the lives of all of these women. He must become a more important emotional figure as the head of the family, particularly to June, who seems distrustful of men. Asserting himself in his male role will actually stabilize their lives, adding balance to a sometimes chaotic household in which gender roles have completely reversed. The underlying unrest as the family heads toward being a more traditional family completely unravels the post-feminist themes of Season 1.

The girls are eager to give back to their daddy in the second premiere episode of Honey Boo Boo, planning for Sugar Bear’s 41st birthday. The family decides on a Dukes of Hazzard–themed party, which is a popular American television series that ran from 1979 to 1985. Sugar Bear has an extreme love for the character Daisy, played by Catherine Bach. June claims that Sugar Bear met her once and nearly came to sexual completion upon sight. It is an insecure quip from June that begins to open the gates to the emotional fortress where she hides her insecurities.

Celebrating Sugar Bear’s birthday was a beautiful demonstration of the American familial unit at its best. They destroyed a piñata to release their collective stresses and aggression in a positive way while embracing the diversity of ethnic practices despite living in rural Georgia. Next, they visit a go-kart racing facility. June opts to sit out from the racing at first, because she is legally blind. The idea that such a strong-willed woman would have a disability is a humanizing revelation. Last season, June voiced insecurities about her severely damaged and disfigured “forklift foot,” which had been run over by a forklift in her younger years. June refuses to take off her socks anywhere, and not even Sugar Bear has seen the damaged foot. What else is June hiding? Does she believe that she is too imperfect to be loved?

This season of Honey Boo Boo has already gone where no other episode from the preceding season has ever gone: into the relationship between June and Sugar Bear. Sex and intimacy on television are rarely portrayed in an authentic light, where imperfect bodies and insecurities weigh heavily on the minds of the sexual participants. Sugar Bear’s desire for intimacy and a fulfilling sexual relationship with his woman challenges him to step his game up. Unfortunately, June tells the camera, “It takes a lot to turn this big Momma on.” It seems as though she loses herself in the life of the girls in order to focus on her role as a mother, leaving her man somewhat isolated and depressed. Sugar Bear wants to be more than just a provider for the girls, and wants an inspiring relationship with the woman of his dreams. The viewer can see it, but will June Shannon ever accept the honest intentions of Sugar Bear?

After buying June a carnation and feeding her a Hostess pastry with a candle in it, the mood is finally set for Sugar Bear to show June his love, despite his dirt-covered fingers. All he wants for his birthday is some alone time with his wife, but the architectural layout of the house usually means that the girls must walk through their room to use the bathroom. Eventually they get ample alone time and she succumbs to Sugar Bear, telling him to “just be quick.” Her lack of trust for Sugar Bear’s genuine desire to make love to his woman shows signs of a traumatic past with men. June is losing her identity as the leader of an untraditional household. June has accepted Sugar Bear as the father of her children, but will she take him in as her husband? This season on Here Comes Honey Boo Boo, we will find out if the traditional construct of marriage will threaten the untraditional household’s strong bond.