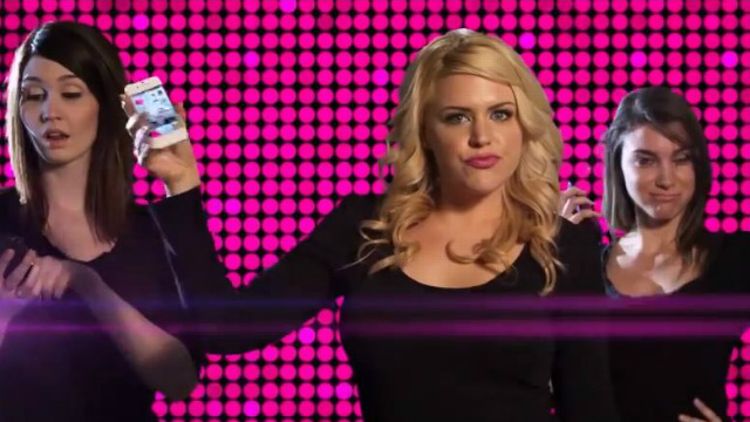 On Tuesday night, actress Tay Allyn posted a video for an ear-curdling song called “Mass Text.” Despite the claims in her site’s bio that she “has created a new breed of Pop that’s like Ke$ha without the sex, and Lady Gaga without the avant garde” and was “chosen by Justin Timberlake and the new Myspace.com as a Top New Artist of 2013” — and that she “sing[s] about mundane things of everyday life to hot beats!” — it’s pretty obvious from looking at her résumé that she’s trying to perform an evil spell, channeling the power of Rebecca Black to hoist her menacing gwishin of a tune onto the charts.

Trapped in a high school for adults, Allyn provides many reasons for being deleted from a chain SMS, like fondling dogs and Barbies with a maniacal smile, taking off her glasses to see herself better in the mirror, and trying to institute the phone-on-each-ear dance craze. It almost seems rude to go for that kind of attention intentionally, because whereas the negative responses to Black’s “Friday” video and Allyn’s attempt to piggyback her way into that niche are all written in the same YouTube commenter vocabulary — summarily, “this sucks” — the emotional responses they provoke are completely different. Giving “Mass Text” more than a single page view feels like walking into an Aqua-tinged hell-bank and overdrafting the account of your immortal soul.

I bought my copy of Andrew W.K.’s I Get Wet during my freshman year of college on a weekend trip to Ithaca. I listened to it once, then again immediately. I played it on the bus to the train station, then on the train all the way back to Providence, for probably five hours straight, over and over. At first, I couldn’t really tell if it was good or bad (answer: good), if I hated it or loved it, and if I was embarrassed or not by the fact that my body reacted to this record by going “Yes.” It had an element of what now sounds the viral alarm: universally provocative, fun, funny, different — a conversation piece. There was something off about it from the beginning, as if it was a glitch in the musical matrix, and the realization years later that Andrew W.K. was not the sole proprietor of his brick-to-the-face party anthems was as disappointing as it was retrospectively somehow obvious. He had tricked us so well that it shouldn’t have mattered — who cares who wrote “Don’t Stop Living in the Red”? In that moment, we lived in the red together! — but matter it did, just like the genuineness of click-hot link-bait matters now. “Friday” always sounded like the bastard child of a W.K. jam, a silly B-side released especially for 13-year-old girls, though admittedly a pretty wonky-eyed one. Its meme-fame sprang from how much people disliked it and yet were compelled to revisit it over and over to find more things about it to pick at (“Sunday comes after … wards”), along with the fact that it was at least partially a sincere effort. It was as pleasant a watch for the gut as it was an unpleasant one for the brain.

I never hated “Friday.” The more time that passes without people talking about Rebecca Black, the more I’ve come to really enjoy it (now I’ll have to take a break and maybe hit “Best Song Ever” a few times as a palate cleanser). Despite the extent to which it was carelessly manufactured, maybe even manufactured with the express purpose of being crappy, Black wasn’t the one executing this manipulation, and there’s a sweetness to the video. Somewhere in there was a beating heart and, if you really pushed for it, the beginnings of worthwhile thoughts about why dumb songs wriggle into you and if this was really any worse than Jessica Simpson’s “I Think I’m In Love With You,” which hit no. 21 on the U.S. charts and used the significant crutch of a sample from “Jack and Diane.” Did we resent it for being hummable because it was stupid? When the seats had finally been chosen and Black’s friend is on her right, with the fake moon illuminating the fake freeway being driven on by licenseless teens crammed haphazardly into a car, did it not feel just like a Friday? “Mass Text” is different; the song sounds terrible and looks creepy on purpose, making it the Wario to “Friday”’s Mario, a smile replaced by a smirk. Even laughing at it feels icky, and so with each of what I assume will be many page views, we should take away a lesson from “Mass Text” in order to arm ourselves against its menace, because its demon spawn “Clean Ma Room” (a “pop anthem”) is on its way. We want fun, fun fun fun fun. This isn’t it.