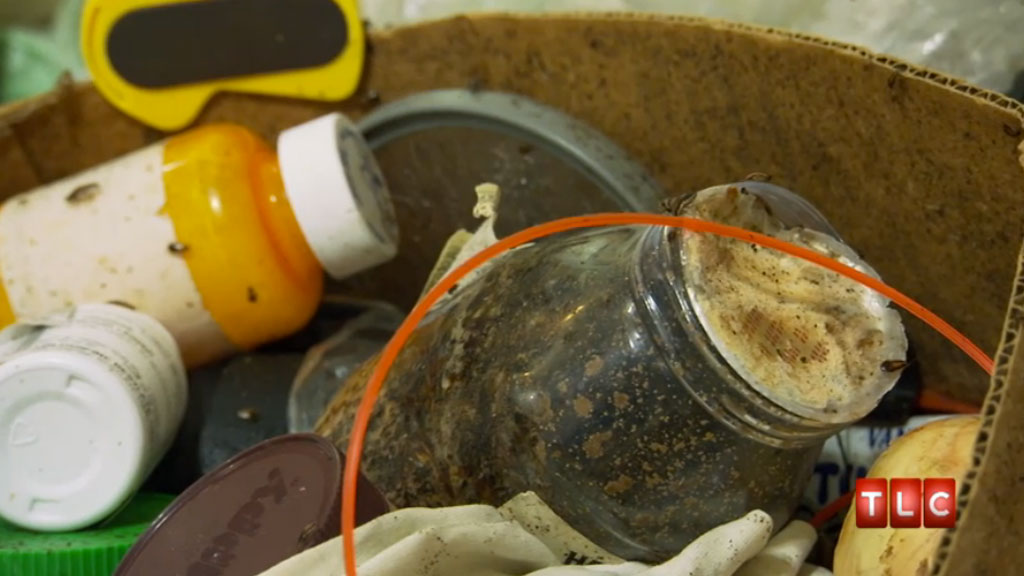 Who Is This Now? Seymour.

Why Are We Watching Him? He’s being forced, against his will, to clean out his catastrophically hoarded apartment.

How Did He Get Here? One of his neighbors apparently reported Seymour so city authorities would intervene and require Seymour to clean up.

What’s the Grossest Thing We See? Seymour’s apartment is crawling with roaches. And I mean that every surface is just crawling, teeming, bubbling with them. The few items that aren’t just covered with insects are coated with this powdery black substance that turns out to be roach droppings. When two exterminators come in to assess the situation (before telling Seymour that they can’t even think about starting until the apartment is cleaned out, because there are too many places for bugs to nest and hide), one comes across a jar in Seymour’s room. The other says it can’t possibly have ever been full of mayonnaise, because now it’s so contaminated that it looks like a kid’s grade school botany project, full of dusty soil. But it’s not dusty soil. It’s caked-up black roach crap.

What Have We Learned? Seymour’s health problems are such that his children decide to move him permanently into a senior citizens’ residence, never to return to his old apartment, and if that can happen, WHY DOESN’T IT HAPPEN EVERY TIME?

Who Is This Now? Victoria.

Why Are We Watching Her? She’s in conflict with her eldest daughter, Teryn.

How Did She Get Here? Victoria is a minister, and thus has more than the usual number of opinions about the way Teryn is raising her daughter, Salem.

What’s the Grossest Thing We See? Honestly, it’s hard to be that grossed out by anything that happens on this show because it all seems so staged. But: Victoria has a “candid” conversation with Teryn about the fact that Teryn and her husband, Chad, don’t go to church every Sunday and generally don’t bring Salem. Teryn holds her ground, saying it’s her decision how and when to start her daughter’s religious education. So Victoria and her youngest daughter, Kolby, just wait for the next time they “happen” to be babysitting Salem on a Sunday, and then instead of taking her to the zoo, as planned, they take her to a church service instead, against Teryn’s explicit wishes.

What Have We Learned? Salem is considered by some to be an acceptable name for a child.

Who Is This Now? Mila.

Why Are We Watching Her? She’s meeting a suitor, Brace, for a first date.

How Did She Get Here? She’s arranged for a date with Brace through Cowboys for Angels, the agency that represents him in his work as a prostitute.

What’s the Grossest Thing We See? Apparently, Mila’s mother and grandmother both watch Gigolos and are fans of Brace, so since Mila is currently unemployed and doesn’t have a lot of discretionary funds to spend on things like sex, MILA’S MOTHER AND GRANDMOTHER ARE PAYING FOR THIS DATE.

What Have We Learned? Some families are a lot more open-minded than mine.

Walk Around, Drink Some More: An Afternoon Constitutional With the Hold Steady’s Craig Finn

"I really feel like it is probably the most iconic franchise in movie history." ...And the award for "most insane thing ever said about a movie with giant robots smashing each other into toaster parts" goes to... Mark Wahlberg on 'Transformers: Age of Extinction'!