Freak Show & Tell: Just Close Your Eyes and Imagine Your Husband Is on Life Support 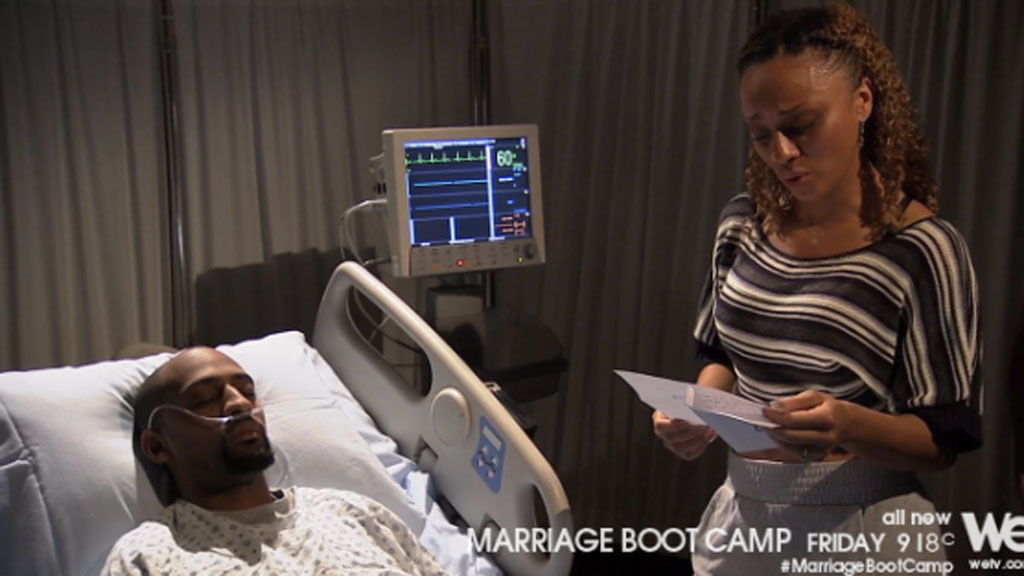 Who Is This Now? Gloria.

Why Are We Watching Her? She’s working on her relationship with her husband, Mark, in an in-patient couples’ therapy boot camp.

How Did She Get Here? Gloria’s first brush with reality TV fame was when she was profiled in an episode of Bridezillas, and you’re never going to believe this but now she and her husband are having problems!!!

What’s the Grossest Thing We See? As a typically literal exercise to help show boot campers What Really Matters, program directors Jim and Elizabeth Carroll create a scenario in which Gloria must close her eyes and imagine that she and Mark were fighting in the car and got into a terrible accident; when she opens her eyes, she sees Mark in a hospital bed, on life support. Jim and Elizabeth have Gloria read some of the hateful things she typically says to Mark when he’s, you know, not on life support, and Gloria keeps repeating that the Carrolls are “sick.” Hey, maybe she feels that way because she lost her first husband and had to take him off life support, for real, and re-creating the experience as a psychological exercise is not going to be as big an imaginative leap for her as it is for her fellow patients? But Elizabeth and Jim turn it back on her, telling Gloria she’s lashing out and judging them because she has low self-esteem. Yeah, that’s probably it.

What Have We Learned? Jim and Elizabeth are as good at therapy as you’d expect two people doing therapy on a WE tv reality show would be.

Who Is This Now? Alicia.

Why Are We Watching Her? She’s exposing her terrible character on television without actually realizing that’s what she’s doing.

How Did She Get Here? Her mother, Laura, is finally cleaning out her hoarded house, and Alicia is supposedly helping. Unfortunately, she also has (a) hoarding tendencies of her own, and (b) some form of narcissistic personality disorder.

What’s the Grossest Thing We See? Alicia is a former beauty queen who’s now in her forties and starting to go to seed; her fiancé, Robert, is a barrel-chested hedge fund manager. Even if you didn’t see the episode, you could probably give a police sketch artist a close enough description to get them apprehended within hours. Anyway: When Alicia shows up to “help” by letting Robert see, for the first time, the state of the house, she immediately makes it all about herself, sobbing and telling Robert, “I’m sorry!” Laura points out that Alicia also hoards, and we cut to an interview with Alicia saying that she only wants to inherit Laura’s good qualities, “like thin and beautiful,” and giggles like the teenager she was thirtysome-odd years ago. Alicia then slows things down by drawing Robert’s attention to her old beauty pageant trophies and talking about how she should have won this or that as opposed to focusing on the cleanup. Then she gets her foot stuck. “My foot is stuck! My foot is stuck! I’m serious! My foot is stuck! I’m serious!” On cleanup day, Alicia goofs around showing off her gymnastic moves, tries on Laura’s clothes, and basically doesn’t help at all. … Also there is years-old standing water in the kitchen stink with stuff swimming in it.

What Have We Learned? That sinkful of black “water” was rough, but Alicia’s antics were even tougher to look at.

What’s the Grossest Thing We See? Here’s what Nick writes: “When I first moved to Las Vegas, I met Jaslene, around town known as Savannah, a 26-year-old Native American/Puerto Rican mix. Not the typical girl I’d seek after, but she definitely caught my eye, with her long, luscious hair, beautiful eyes, and bangin’ body. Possibly the greatest ass ever, as well. A few hours pass, I get a knock at my door. She said, ‘I don’t know if I can take being around you too long without attacking you and jumping on your cock. I have never been forward with a man I desired, and I have never desired a man as much as I do you. I’m a professional dancer and a part-time stripper. If you are interested in me at all, please let me know — preferably sooner than later. PS You can put it anywhere.’ And that was possibly the most I’ve ever been turned on in my life.” Nick goes on to tell us that she was a “9/11 survivor” who took him for a dirty weekend in Costa Rica as a “last hurrah” when she was dying of mesothelioma. “How’s she doing now?” asks Brace, one of Nick’s fellow gigolos. Oh, Nick doesn’t know. But at least she lived long enough to inspire this filthy story Nick can exploit her memory with, if in fact she is dead, which he doesn’t even know!

What Have We Learned? Even in his group of prostitute peers, Nick is not a great person.

Courtney Love Has Her Own Crackpot Theory About Flight MH370