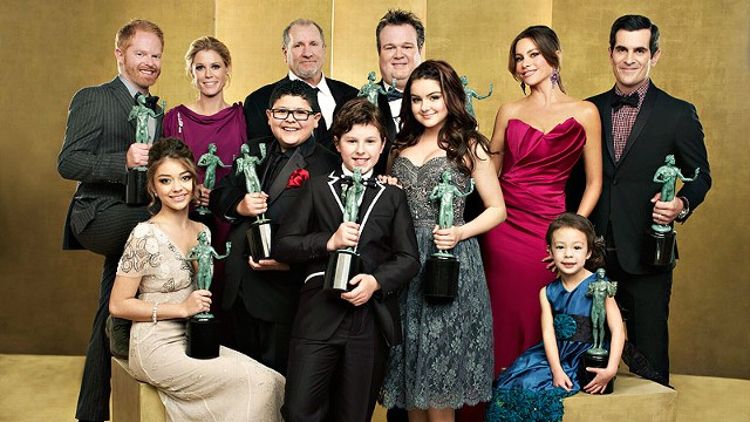 Back in March, it was reported that the cast of Modern Family was headed into some contentious contract renegotiations. While the actors were locked into a seven-year deal when the show kicked off, the success of Family has given them a window now, between the third and fourth seasons, to ask for more money per episode in exchange for allowing their contracts to be lengthened (it’s a standard practice). But things have gotten ugly. The Hollywood Reporter writes that the cast — Ty Burrell, Julie Bowen, Jesse Tyler Ferguson, Eric Stonestreet, and Sofia Vergara — are unhappy with the new terms they were offered, and are now suing ABC to void their original contracts. Originally Ed O’Neill, who was enjoying a higher salary from the get-go, wasn’t part of the Modern Family Five, and was renegotiating his contract on his own. But now, out of solidarity (and also probably out of a desire not to be pelted with Bagel Bites at the craft services table by his bitter co-workers) O’Neill has joined up as well.

Says The Hollywood Reporter: “[T]he five cast members are being offered salary increases as follows: $150,000 per episode plus a $50,000 per episode bonus for season 4; $200,000 per episode for season 5; $225,000 for season 6; and up to $325,000 for an anticipated season 9. The cast is asking for much more, including more than double the offered salary if the show goes 8 or 9 seasons, as expected … The legal theory, according to sources who have seen the lawsuit, is that their deals violate California’s ‘7 Year Rule,’ which prohibits personal services contracts for longer than 7 years. This tactic is a common one for actors who seek to void contracts during renegotiations for increased compensation.” And they’re piling on the pressure already. According to EW, “a table read scheduled for 11:30 a.m. PT today was canceled an hour prior, when the production team was informed the actors would not be attending.”

This whole thing is a bit unseemly, of course: Rich, famous people asking for more money. But ABC does make a tidy sum off Modern Family, and the people who make that possible should be correctly compensated. So we say: Get yours, litigious united cast of Modern Family. Get yours.