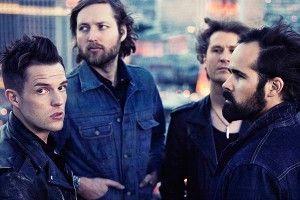 The most celebrated rock band of 2012, at least critically, is Japandroids, a Canadian duo that, in the words of Chuck Klosterman during a recent B.S. Report, “synthesize[s] the best parts of classic rock and makes it the whole song.” It’s a sped-up style perfectly suited to our short attention span times, an era in which the very idea of seeding an album with “difficult” deep cuts seems almost as fossilized as the idea of an album. But Japandroids are neither the first nor the best purveyors of Fast Forward Rock. That distinction goes to the Killers, the glittery Las Vegas quartet that returned to the stage last night in New York City.

Kicking off promotion for September’s Battle Born — their first release since the last time America cared about Michael Phelps — the grandiose group downsized themselves to the relatively modest Webster Hall for an evening, the better to connect with their synth-starved fan base (and the Amex execs huddled over VIP tables in the balcony). Amid a hyperactive light show, the band emerged with “Runaways,” their strident new single. At once it was everything great about the Killers: overstuffed and overconfident, unable — or merely unwilling — to distinguish between cliché and ambition. With its big-screen bombast, “Runaways” — like “When You Were Young” before it — is already being compared to Bruce Springsteen, but this is, of course, wildly inaccurate. First, the Boss rarely gave in so completely to a hook this huge. But, really, even with its talk of “blonde hair blowing in a summer wind” and nights that “get wild,” “Runaways” sounds nothing like Bruce Springsteen. Rather, it sounds like what someone staying up all night reading about Bruce Springsteen on Wikipedia might imagine Bruce Springsteen sounds. It’s buffed up and shiny, a perfectly constructed delivery system for all the fist-pumping parts of Born in the USA you think you remember and none of the grouchy Realpolitik you’ve been trying to forget. It takes Bruce’s blue-collar heroes and airlifts them to the popped-collar fantasyland of the Strip; all of the glory, none of the daze.

And this is, I think, the key to the Killers. Their best songs exist — no, thrive —  in this uncanny valley between reality and nostalgia, between ham and cheese. Like all great rock stars, these guys are totally self-made outsiders, but their success is even more surprising: They’re a bunch of goofy Mormons from the middle of the desert. The skyline they grew up in the shadow of wasn’t Manhattan — it was New York, New York.  They understand gambling like the locals: Even when you’re down, success is only a roll of the dice away. So that’s probably why their set last night felt like one long hot streak. No one had to wait long for the hits — all of the songs were hits. After “Runaways,” singer Brandon Flowers — who, perhaps in a nod to turning 30, has swapped the mascara for a tight-fitting guayabera — slid effortlessly into “Somebody Told Me” and “Smile Like You Mean It,” megajams from 2004, back when wanting to be the biggest band on MTV was both attainable and desirable. Then he paused and addressed the crowd for the first time: “We’re gonna pick it up a little bit.” The band launched into the ecstatically dippy “Spaceman” and Flowers emerged from behind the blinking backward lightning bolt that had been soldered to his Casio and preened; a big fish tossing $1,000 chips away like birdseed. Critics had a field day with the mangled Esperanto chorus of “Human” — “are we human / or are we dancer?” — but no one in the audience seemed to mind, as they tossed back shots of Ron Ron juice and beat up the beat with suburban abandon. “I hope our next album is as shitty as Day & Age,” Flowers sneered at one point, his business savvy smearing into his ego.

Even the new songs sounded like radio staples. A slow jam by autobahn standards, “Miss Atomic Bomb” seemed to melt away midway through as shaggy guitarist Dave Keuning picked out the melodic threads of “Mr. Brightside.” I was ready to give the group credit for stagecraft — Seamlessly transitioning into a crowd favorite! What a way to sugar the pill! — before I realized the band was merely quoting itself. Such self-imagining is central to The Killers’ story, of course. Flowers wanted to be in a band before it was clear to anyone that he could sing, and even the group’s name is a winking nod to the impossibility of authenticity: “The Killers” were a fake band playing in the background of a New Order video. (And not even good New Order! Late period, “Hey, kids, please get back on our lawn” New Order!)

There’s a line in “This Is Your Life,” a great, stomping song from the aforementioned Day & Age, that goes, “You gotta be stronger than the stories,” and this is something The Killers figured out years ago. But it seems particularly relevant now. There’s no such thing as rock radio anymore; the biggest movement in music is primarily about glow-sticks, not moving units. The Killers have always wanted to be legendary, but, more important, they never stopped believing in the legends: You know, the one about the small-town kids who conquered the world or the one about the guitar-based band that sold more than 200,000 copies in 2012. God bless ’em. They’ll keep giving the people want they want, even if it’s not clear anyone wants it anymore.

Filed Under: The Killers, We Went there

See all The Killers