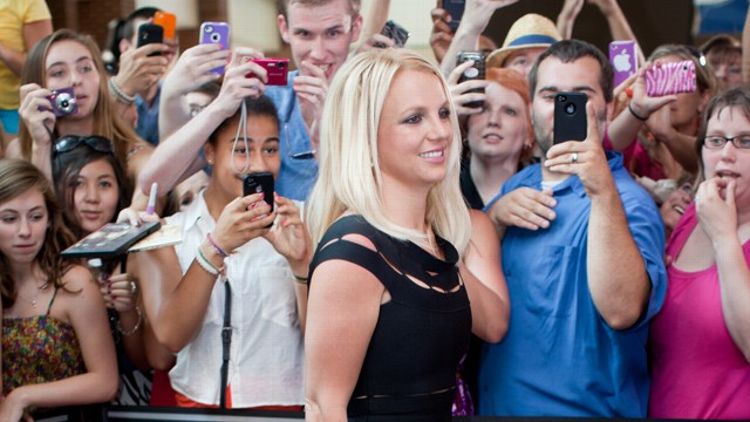 When Britney Spears was originally tapped to join The X Factor’s new, improved, Abdul/Scherzinger-free judging panel earlier this year, the first question wasn’t, as was the case for newly minted American Idol judge Mariah Carey, how it would affect her career, or even whether she had the industry acumen necessary for the job. It was something even more basic than that: Could she survive as a non-singing-and-dancing television presence over the course of a three-month season? There are two kinds of pop stars: The ones we love to hear speak, and those we’d rather have shut up and sing the hits. Spears, to everyone but her most die-hard fans, has always been the latter, all stories of her supposed former pop prescience notwithstanding. The ability to be personable and funny and good on Ellen helps if you eventually want to shill for Neutrogena, but Spears has proven that it’s by no means necessary to create a series of monster pop hits. So while, on paper, Spears was a great get for Cowell’s embattled show, there was serious doubt as to whether it would pay off in practice.

The X Factor’s TCA panel yesterday (conducted via satellite from Miami, where the show is now filming the boot camp stage of the competition) was our long-awaited introduction to Britney Spears, X Factor judge. She’s been at it for about a month now — enough time, one would think, for her initial reported skittishness about the job to have lessened. And things certainly started off on an encouraging note, with all four judges (Cowell, L.A. Reid, Demi Lovato, and Spears) showing a slightly barbed, giggly, unrehearsed sort of chemistry that was sorely missing from Season 1, while still hitting a few key predictable beats: Cowell called Spears “as sweet as a lemon,” and repeated the line we’ve been hearing for a while about how she’s actually “meaner” and less generous with the “Yes” than he is. Whether or not that statement is true, Cowell (and really, The X Factor in general, with all its reaffirmations of its own hugeness and importance) could benefit from a lesson in “Show, don’t tell.”

But when a journalist asked what it was like to be back in Miami for boot camp, having gone to Mickey Mouse Club boot camp there as a child, there was a pause so massive that it brought the panel to a screeching halt. “That wasn’t in Miami,” Spears answered tersely, with no further elaboration. Even over the satellite feed, the sudden discomfort in the room was palpable; the press gazed upon a projected image of a sad robot who had just been asked to access corrupted data.

From there, things deteriorated at an exponential rate. No matter how hard Lovato and her sassy turquoise braid played up her role as the know-it-all teenage brat, all eyes were on Britney as she slowly mentally checked out of the panel. Her answers became more halting and scared; when another reporter asked what music she enjoyed in her spare time, she stammered, free-association style, “I love rap. I don’t know … the proper way to rap, I don’t rap. I appreciate it. I like cabaret. I love live music. I love bands.” When another inquired as to her own personal strengths as a judge, she froze, and a good five seconds of silence passed before L.A. Reid stepped in, citing her experience in the music industry. The corrupt data had not only spread, but temporarily affected the sad robot’s ability to recall any of it at all.

This is probably the last time we’ll see the real, candid version of Britney the judge until The X Factor‘s live shows start late this year. Until then, throughout the pre-recorded audition, boot-camp, and judges’-homes stages of the competition, she can freeze up or walk out all she wants, and it can still be removed or molded to fit the firebrand diva narrative Cowell is trying to spin here. I don’t doubt that Spears is opinionated and has good judgment when it comes to aspiring pop acts. But I do doubt that she has the psychological resilience to take over the job that made Nicole Scherzinger weep openly on national television, driving the last nail in her career coffin.

At the time of the announcement, Spears’s casting was seen as a game changer, but one that carried an exploitative, implicit guarantee of an Abdul-eclipsing train wreck. But after this brief intro to Britney Spears, Person Who Talks on TV, I wonder if people might be disappointed with what may turn out to be less of a “wreck” and more a series of unplanned stops. Will this deter everyone from tuning in out of morbid curiosity? Of course not. But whether or not they stay depends on what, exactly, they were expecting.