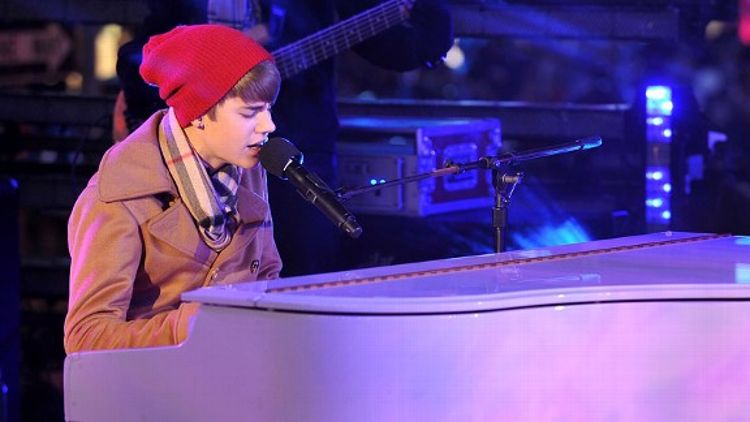 And in the latest installment: Bieber himself discusses how he plans to avoid awkwardness in his transition from teen phenom to adult megastar. While wearing what appears to be a high-end designer lobster net, our dude covers the latest issue of V Magazine (via NME), and gets into the nitty-gritty of his current transitory period. Take it away, Biebs.

So what’s the plan?

“People need to know I’m not a kid anymore. But at the end of the day, I’m not completely grown-up. … I’m not going to try to conform to what people want me to be or go out there and start partying, have people see me with alcohol. … I don’t want to start singing about things like sex, drugs, and swearing. I’m into love, and maybe I’ll get more into making love when I’m older.”

Mmmhmm. Right. Sensible: Justin Bieber will probably eventually start making songs about boning. But in the short term, how will non-screechy tweens start taking him seriously? How will he save the souls of the NonBeliebers?

“It’s all about making good music. People hate me before they even listen to my music. I know a lot of people say they hate Justin Bieber who haven’t even listened to any of my music. They just hate me because they hate the idea of me. I’m young, I’m handsome — I don’t mean to sound conceited — but they think that I just got here because [of that], because I’m good-looking and girls like me, but the music isn’t there. … I feel like the more I put out, people will realize it’s really good music.”

Oh, we already realize you’re not just handsome, Justin! OK, anything else?

“I also want people to know that I write my [rap lyrics]. No one writes my stuff for me. I write everything on my iPhone. And when people say, ‘Oh, Justin Bieber, he can spit but he didn’t write his stuff,’ they’re wrong. I do.”

In conclusion: Bieber reveals a remarkable level of self-awareness here, which is just one more reason to believe he will, eventually, nail the metamorphosis and rule us all. For now, though, things are still going to get awkward every once in a while, in the “maybe I’ll get more into making love when I’m older” and “I’m handsome” variety. The Watch continues.