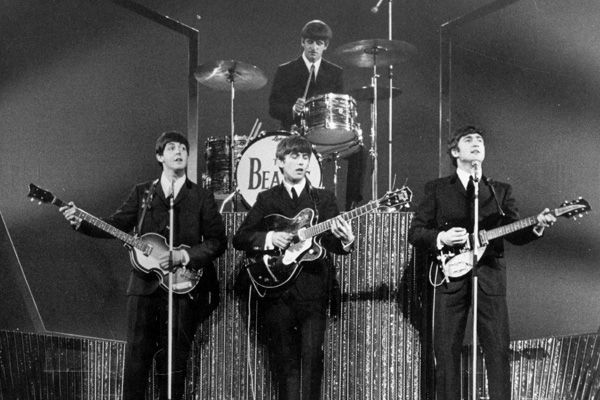 OK, so: This artist Jonathan Gent made a painting called The Beatles in America. This painting is a representation of the withered penises of the four Beatles. (How does Jonathan Gent know what the withered penises of The Beatles look like? He doesn’t. It’s art.) This painting was hanging in the Museum of Liverpool, as part of an exhibition called “Liverpool Love,” and was slated to be auctioned off for a children’s charity. And now this painting has been vandalized!

According to a representative from the museum, the artwork was smudged and pressed. “‘The Beatles in America’ has been damaged by a group of visitors to the Liverpool Love exhibition,” the rep says. “The painting has been removed from display so its condition can be assessed by our conservators.” As of press time, no word on whether the conservators have experience in the withered-penis artwork department.

(This is what the painting looks like, because by now you’re pretty curious.)

So was this a treacherous act of desecration? Or was it … something else? See, according to Gent himself, the idea of the painting is that “It’s as intimate a piece as you can get about The Beatles. That was really what I was after because they are such a global thing — this untouchable thing and that is what interests me most about them.” (And not just them: “I think of Elvis’s dick, or I think of Springsteen’s, or Lou Reed’s, or Bowie’s, or anyone’s,” he’s said.) Furthermore: “This idea of suddenly having their penises on a canvas it was, I guess, about closeness, getting close to this idol in some way.”

Filed Under: Art, The Beatles