Exit Through the Coffee Shop: The Absurdist Art of ‘Nathan for You’ and Dumb Starbucks 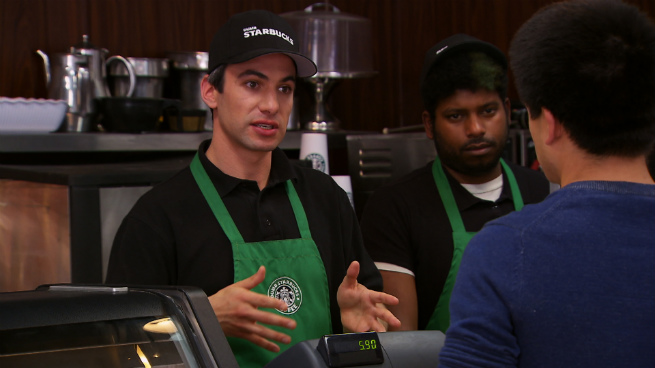 Last night Comedy Central aired the “Dumb Starbucks” episode of Nathan for You, the culmination of a joke that took six months to pay off. In February, Nathan Fielder first announced he was the one responsible for the sudden appearance of a store named Dumb Starbucks in a Los Feliz mini-mall. The Nathan for You episode covers the incubation of Dumb Starbucks from concept to art installation, bracketed by Fielder’s incredibly whole-assed attempt at establishing himself as a half-assed parodic artist. In the end, his faux–culture jamming art is really just absurdist art.

The Dumb Starbucks stunt took place the same week Shia LaBeouf installed his performance art piece #IAMSORRY at the Cohen Gallery on Beverly Boulevard. Almost everyone in line for the Shia thing was a blogger, and there was a similar feeling at Dumb Starbucks. All week long, L.A. bloggers shuttled between the two think-piece honey traps and churned out speculation about their meanings, including the possibility that they didn’t really contain any. Fielder makes purposely bad anti-consumerist art so he can be considered a parody artist, but his anti-consumerist art is actually of a much higher order. Before Fielder reveals himself as the perpetrator, the episode shows several Dumb Starbucks customers and a news outlet guessing that the work is Banksy’s.

The proprietor of Helio Cafe, the coffee shop Fielder attempts to take over and turn into Dumb Starbucks before going off on his own crazy adventure, is a laid-back IRL Portlandia character named Elias. One of the funniest things about Nathan for You is how many of Fielder’s harebrained business schemes actually turn out to be successful. If the show has a thesis, it’s that people will do anything for a deal, but the suckers who show up for the free coffee or climb up a mountain to redeem a coupon aren’t really the butt of the joke. Nathan for You deals with the lengths people will go to follow social conventions, particularly on camera, and how incredibly weird humans become when they’re trying to act “normal.” Fielder employs his jagged Canadian politeness to push people to their limits, seeing how far they will go not to upset the apple cart, and then shoving the apple cart over right in front of them. Nathan for You never treats the store owners as mere rubes; they are presented as the straight man to Fielder’s intensely awkward behavior.

The association of Banksy with Dumb Starbucks ramped up the Dumb Starbucks press cycle, which brought new waves of people standing in line eager to experience the work of a great artist. The “Dumb Starbucks” episode itself shares similarities with a Banksy: 2010’s Exit Through the Gift Shop, a documentary directed by Banksy that is possibly a mockumentary about the art world, depending on who you ask. In Gift Shop, Banksy either orchestrates or enables an artist (or “artist”) named Mr. Brainwash (née Thierry Guetta) to demonstrate the idiocy of the art market. Mr. Brainwash makes terrible street art that rips off Banksy, but without any of Banksy’s skill or wit. Using the publicity techniques Banksy used for his own show “Barely Legal,” Mr. Brainwash stages an art show that is also blatantly a spectacle, focusing more on promotion than anything else. Guetta allegedly sells more than a million dollars worth of work. Mr. Brainwash, to his credit, still exists.

At the time of the film’s release, Banksy’s spokesman said, “I think the joke is on … I don’t know who the joke is on, really. I don’t even know if there is a joke.” You could say the same thing about Nathan for You’s pranks. The awkward sustained tension of what the joke is, and whether there even is one, powers the show’s strange comedy. If the “Dumb Starbucks” episode has a punch line, it’s on the exposure effect, the psychological principle that people prefer things they are familiar with. The flood of customers to Dumb Starbucks demonstrates the power of the Starbucks brand name, but you could pull it off with any big brand name. Dumb McDonald’s would have worked too. Is Dumb Starbucks really a work of art, even though it was a joke? Isn’t it just a more accessible, funnier version of the installation art piece Prada Marfa? The Prada Marfa store was broken into and vandalized a few days after it opened, and the genuine Prada shoes and handbags inside stolen. On the sides of the building, the criminals painted a word: “Dumb.”

It's Dark and This Amusement Park Ride Is Scary: The Joys of DMX Doing Normal, Everyday Stuff