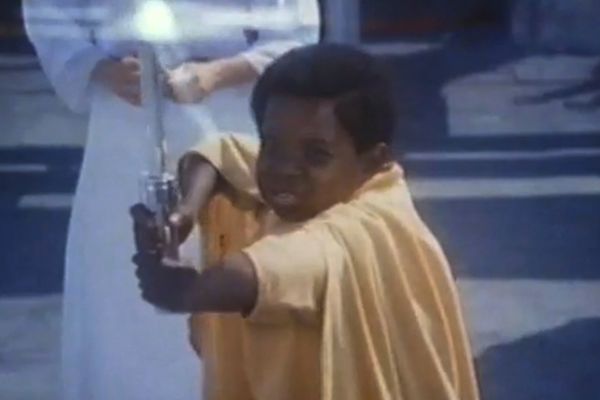 Welcome back to our series Rembert Explains the ’80s. Every so often, we’ll e-mail 25-year-old Rembert Browne a video from the 1980s that he hasn’t seen. Rembert will write down his thoughts as he’s watching the video, then we’ll post those thoughts here. This week’s installment was selected by Grantland reader Greg Garman: Gary Coleman’s Star Wars Spoof from the 1984 film The Fantastic World of D.C. Collins. If you have an idea for a future episode of Rembert Explains the ’80s, e-mail us at hollywood@grantland.com.

0:00 I hesitate to push “Play” on this video, because there’s no way it gets better than the first image:

This orange polo getup is phenomenal, but the MVP of this video still is easily the part in his mini-fro. It screams “scholar” but hints at “troublemaker.” It’s ever so subtle, but once you notice it, the part becomes the only thing that matters. Also, that facial expression. It’s like he’s gearing up to say his “Willis” line before the cameras start rolling. There’s no chance this “spoof” begins and ends without him saying that, right?

0:04 Four seconds in and no words. But we’re zooming in on Gary’s face. This is fun.

I wonder if there are people who saw this spoof before the actual Star Wars? That would be a trip. Please say he’s supposed to be Lando’s son. Is this Cloud City?

0:13 Oh, hello there, real Stormtroopers. Is something about to go down? Is Gary about to start killing fools with his Gary-size lance?

Someone’s got to tell Gary to stop holding a sword like he’s Jeff Bagwell. Having said that, I fear for the lives of these two gigantic, fully armored Stormtroopers. Gary looks as if he means business.

0:27 Oh what’s that, Gary? You want me to stop calling you Gary because you just announced that your name is “Dwight Cloudclimber”? Oh, OK.

[Note: Let’s discuss what just happened here. “Sky” became “Cloud” and “walker” became “climber” and (most regrettably) “Luke” became “Dwight.” When given the chance to create a new name, one based on someone else’s name, don’t go and ruin it with “Dwight Cloudclimber.” Without even thinking about it, I just came up with “Dwayne Windrunner” and “Dwyane Airstrutter.” Missed opportunity, spoofers. Just know that.]

0:34 So, the Stormtroopers let fake Princess Leia run and “hide” behind Rufus Firecrawler, who then proceeds to taunt the two sword-yielding white giants with, “You can have her back, all you have to do is remove one obstacle. Me.”

Again, I fear for the safety of these Stormtroopers.

0:55 Easily one of the best action sequences in film history.

It’s definitely looking like two Stormtroopers weren’t enough. I mean, this isn’t some geek off the street; this is Darius Rainwhisperer we’re talking about.

Who is this dude? This feels like the end of a Scooby-Doo episode. I swear he’s about to say something along the lines of “and I would have gotten away with it, too, if it hadn’t been for those meddling kids and that dog.”

Gary Coleman’s dreams are weird. I think any second now this is about to turn into “Hero Gary makes out with thankful princess.” I mean, just look at her.

She owes LeBron Stormtwerker her life. SHE MUST REPAY HIM.

“You two go back and tell the warlord if he comes after the princess again he’s going to have to deal with me. Dwight Cloudclimber.”

This was so good until the very end. But that name, I just can’t. It’s actually the worst. That’s probably why the warlord is trying to mess with him, because of that stupid name. No way a warlord comes after someone named ‘Twan Breezejumper. Never. Also, if you had shown me this picture a week ago, I would have assumed it was from a community theater production of Amistad. There’s no way “Star Wars Spoof” even remotely makes its way into my head.

1:53 He just called it “the star saber of justice.” Wow. And here I was, curious if he would see if she’s free on Friday. SHE’S AVAILABLE.

1:57 And just like that, Gary goes from a hero to a janitor.

There are so many other professions Gary could have been. I’m so serious. What about an accountant, an actuary, or a food scientist? What about a bookkeeper or a carpenter, or a chemist even. Or an engineer, coach, educator, even an electrician. Gary could have been a banker, a firefighter, a police officer, a fitness trainer, or a judge. But no. He’s got to be a janitor. Microbiologist is an occupation that people are, as is mathematician, musician, physician, and physicist. Real estate is a field that I’m sure Gary’s character could have excelled in, but if not, there’s always therapist, nurse, veterinarian, or writer. And if all else fails, just let him be a zoologist. BUT NO. HE’S A JANITOR.