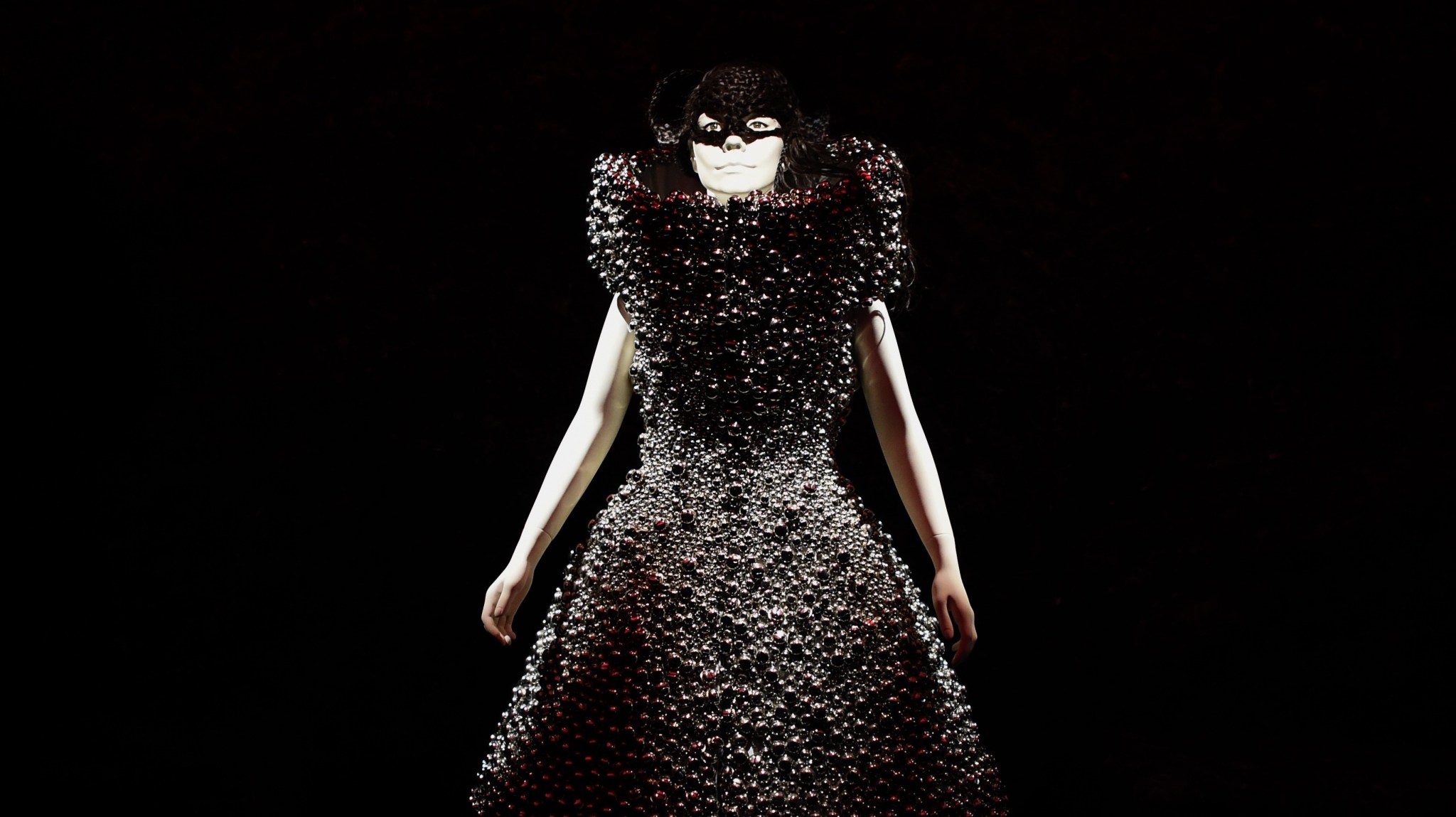 Music and museums: so hot right now! Earlier this week, we checked out RZA at PS1 in Queens; on Tuesday morning, I got to see Björk at MoMA. Well, kind of. I mean, she was there. For, like, 30 seconds? I think?

The occasion was a press preview of a new, self-titled exhibition dedicated to the beloved Icelandic powerhouse. It’s all part of the dramatic milieu swirling around her new release, Vulnicura, which dropped in January1 and happens to be — oh yes — a breakup album.

“With each album she makes, Björk immerses us in a fantastical universe of her own design,” Jessica Hopper wrote in her must-read Pitchfork piece “The Invisible Woman.”

Now, on Vulnicura, she’s letting us in to her world — though it is not necessarily one of her own choosing. The album outlines the dissolution of Björk’s relationship with her longtime partner, the artist Matthew Barney. She confesses the devastation with candor. By the third song, “History of Touches,” she’s lying awake in bed, indexing the past with startling intimacy: “Every single fuck we had together is in a wondrous time-lapse with us here at this moment.”

At just shy of 50, more than two decades past her solo debut, Björk is still very much an unceasing cultural wrecking crew, and an obviously great candidate for a hotshot MoMA retrospective. She’s not mummified, not at all, but it’s certainly worth taking a look back.

“Do you like Bah-jhork?” a nice lady with distinctively patrician vibes and a possible MoMA membership card asks me while we’re in line, pronouncing the name with a soft G. Uh, yes? Pause. Do you? “No. And my daughter doesn’t either, so I don’t feel uncool.” I nod, and we shuffle forward into the meat of the exhibition: “Songlines,” an “experiential visual and sound journey through her eight albums via costumes and objects,” according to the press release; a snaking hallway with a lot of cool Björk shit, according to Grantland.com.

On the massive atrium wall behind us, the video for “Big Time Sensuality” is projected — there she is, young Björk, in her hair buns, taking in the majesty of New York City on the back of a flatbed truck.

Moving forward, we travel through the discography. Hey, the boots from the “Hyperballad” video. Whoa, the sex robots from the “All Is Full of Love” video! Ahh, the swan dress! Ohhhh daaaammnn, real-life “Wanderlust”! And throughout, little snatches of her notebook and diary scribblings (from as early as age 9): “I don’t recognize myself. This is very interesting.” 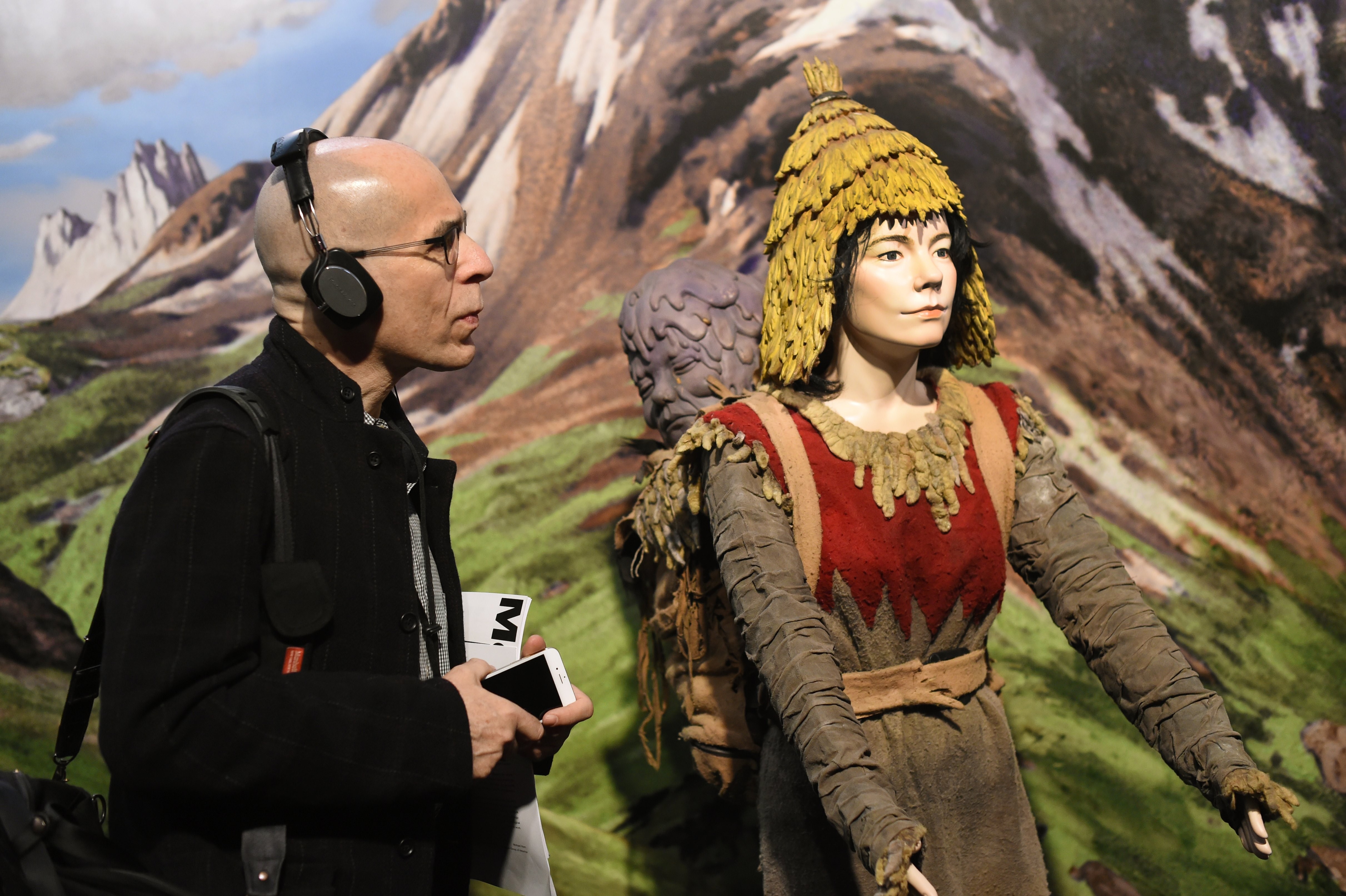 Downstairs is the other main element of the exhibit: a large, dark, cavelike room with two screens installed, one on each end, playing the video for “Black Lake,” the 10-minute centerpiece from Vulnicura. One way you know it’s not just a plain old video is that the press materials go on to call it “the debut of … a commissioned film and music work.” (Adds the Times: “6,000 soundproofing cones were meticulously hand-stitched in felt, and technicians spent hours mixing the song for the space, with Björk’s oversight.”) The other way you know it’s not a video is that when I spotted old friend Emily Yoshida in line and tried to hop in with her, I was sternly rebuked by a handsome, well-dressed, and bespectacled museum employee who was oozing moral higher ground. “I … coworker,” I mumbled. “No,” he said. I slunk to the back. 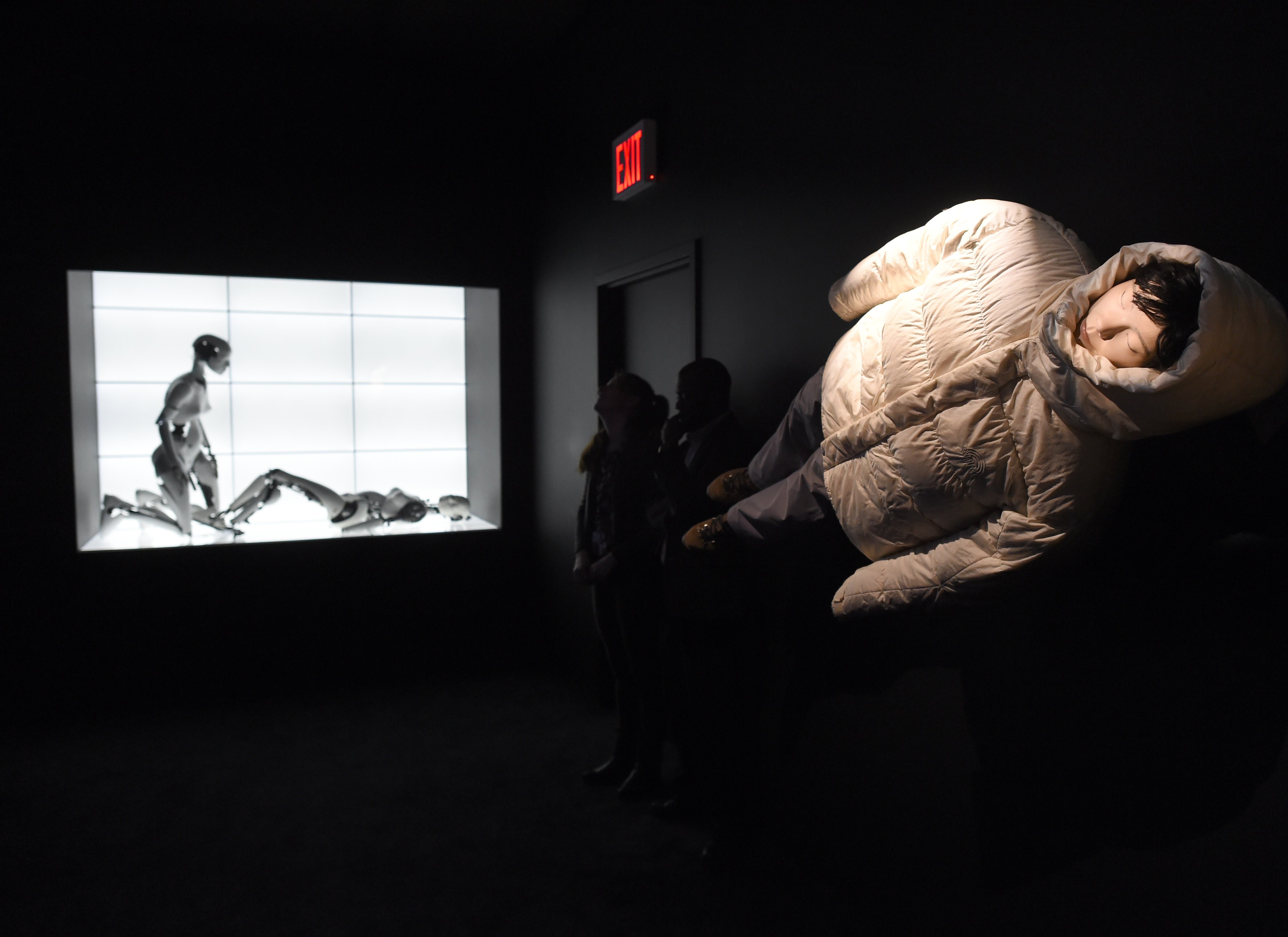 Word was, Björk was actually intro’ing the video; rumor was, she was dressed as a cactus. Yoshida had gotten the same intel, and when we both entered the darkened cave, Emily spotted her first. “THE CACTUS IS HERE,” she texted me. “THE CACTUS HAS LANDED,” I confirmed.

Turns out it was maybe more of a medieval coned headdress? With a black veil? Or maybe a representation of the topography of Mars? Or — you know what — yeah, maybe it was a cactus?! It was nearly pitch black, and basically impossible to tell. But then we heard that wonderfully familiar clipped Icelandic accent, and we knew we’d just seen Björk materialize from her netherworld to tell us that she was very grateful that this all had come together.

Filed Under: Music, Art, Bjork, Vulnicura, MOMA, We Went there