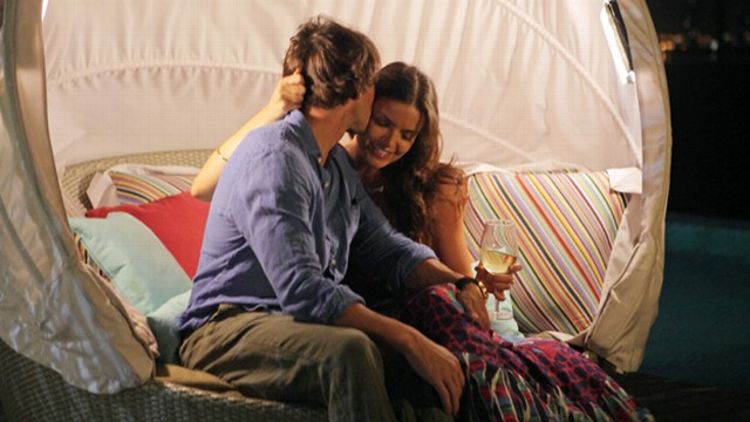 Bachelor Ben: The Bachelor contestant “Courtney Robertson was running out of tricks to keep Ben Flajnik’s attention” after her “skinny-dipping in Puerto Rico” stunt. For a Panama rain forest group date “she shamelessly bared her breasts for an entire afternoon” (better than shamefully baring them?) and “to up the sexual ante” asked him to come over to her room. “Alas, the California winemaker, 28, never showed.” After being stood up, “a dismayed Robertson stepped out onto her hotel balcony and tried her luck with a crew of construction workers outside.” How did that work? “She danced for them in her bikini, shaking her butt” while they whistled. “She looked like she wanted attention.” An attention whore on reality TV? You don’t say. “It wasn’t about Ben or finding true love. She just wanted to be famous.” A sex tape she made with an ex-boyfriend may pop up soon. “It’s pretty dirty.” She formerly dated Jim Toth (the CAA agent who is now Reese Witherspoon’s husband), Desperate Housewives‘ Jesse Metcalfe, and Entourage‘s Adrian Grenier, and was “superaggressive,” a so-called “stage-five clinger” who “pushes herself onto men” and has “always relied on her body to get what she wanted.” “She’s like a monkey. She won’t let go of one branch until she grabs hold of another — and she’s always looking for a better branch. She wants to snag a rich dude.” “Her best line is before having sex with a man. She’ll ask him, ‘Are you ready for your date with destiny?'” While some people claim Courtney is a plant cast to create controversy, sources say, “Roberton’s bitchiness is 100 percent genuine.”

Taylor Swift: Was dating My Week With Marilyn actor Eddie Redmayne, but it’s already over. They met while she was “auditioning to play Eponine” in the film version of Les Miserables. “They hung out in New York City” and, shocker, “Taylor developed feelings for him fast.” Although “the crush was mutual” it fizzled out quickly due to distance. “They reunited in London,” where they “went for drinks and rendezvoused at Swift’s hotel the next night” — OOOOH GIRL — “but days later, her hopes for romance vanished” when she lost the part to Samantha Barks, and realized that “Eddie’s not interested in a long-distance relationship.” UK-besotted “Taylor loved this image of a British boyfriend.” Tay, for your own sake, don’t fall in love with an image. And you probably dodged a bullet, because the UK gossip press are fucking vicious.

Adam Levine: Got dumped by his Russian lingerie model girlfriend after the holidays. “Has this love taken its toll?” LOL. Levine “and his supermodel girlfriend of two years, Anne Vyalitsyna, got into a big fight in late January — and she broke up with him!” Although he sang “Moves Like Jagger” to her on the Victoria’s Secret catwalk in November and gave her “a $15,000 Birkin bag for Christmas,” he was still apparently a very shitty boyfriend. Vyalitsyna “doesn’t think he treats her well.” Levine’s rep denies the supposed couple’s split as being “100 percent not true.”

Misc./Etc.: “Flowing silk mousseline” “first spotted making out during a Coachella music festival party” “Thanks for helping me find my miracle wife” Daniel Radcliffe: “I’m comfortable with my body” “mocked for her mom jeans” “All these girls were missing is a pole!” “Should I marry this werewolf?” “Gosling got shots for college kids!” “It’s called The Hunger Games not The Eating Games!” “We even played cornhole. He fit right in!” “regularly party-hopped to seem younger and more hip” “the joy of grits and ham hocks” “She was never happy enough just being a couple. She always wanted more, more, more, whether it was a ring or another baby.” “He will bring his own brand of enthusiasm and energy.” “crushed sugar, watermelon.” Madonna: “I don’t really do Pilates anymore.”

Scarlett’s New Man: Nate Naylor is a BABE. “Scarlett looked so happy and in love. She was hanging all over Nate and shrieking and laughing at practically everything he said. Some of the other customers were actually getting annoyed at how loud she was!” Be quiet, other customers! You didn’t suffer through dating Sean Penn this summer. Johansson “has been packing on the PDA with the handsome 38-year-old advertising executive at hotspots all over the Big Apple lately.” Are we sure this isn’t just viral marketing for the new season of Mad Men? At dinner on January 28, “Scarlett was rubbing his back and kissing his neck.” Cute. “The tattooed Phoenix native’s bad-boy appeal may be one reason she’s so intrigued. His Tumblr blog, called Up In Guts, is chock-full of artwork, depicting barely clad women, skeletons, and other provocative images.” Sounds like Tumblr.

Sandra Bullock & Ryan Reynolds’ BFF: “He may not be Ryan Reynolds, but for lovelorn Sandra Bullock, it could be the next best thing.” While Sandra’s “super-crush” Reynolds “has always looked at her more as a buddy than a lover,” his friend, producer Jonathon Komack Martin, may want to be lovers and friends with Sandy. “Sandra and Jonathon, both 47, have been close for more than 10 years.” Ex-husband Jesse James was always jealous. “Even though Jesse always thought Jonathon was kind of nerdy, he would wonder about the nature of their friendship because Sandra was so effusive about him; she always described him as ‘brilliant,’ and now that it looks like they could be a couple, Jesse is actually jealous in a way. I think it’s affected his macho pride.” Jonathon’s father, James Komack, was the executive producer of Welcome Back, Kotter (RIP Robert Hegyes). “Jonathon has long been thought of as a guy who would be there for Sandra when she needed a shoulder to lean on.”

Misc./Etc.: “The diapers blow me away.” “New Jersey’s new hotspot” “Beyoncé’s vowed to have a better body than ever before … and she’s a woman of her word.” “The guy I’m dating now is super, super, super intelligent.” “The students come to party!” “Ryan Phillippe is regressing to adolescence, dating a 20-year-old. This is a recipe for an early midlife crisis.” “cozying up to a tall hunk at nightclub Cabo Wabo” “her new look helped her land a high-profile boyfriend.” “Piloxing (mix of Pilates and boxing)” “Hollywood makes people crazy. I get what is pretty, I love it, but it’s not real.” “There is no denying that she loved to have a drink.” “lying unconscious in the bathroom at Rod Stewart’s house” “The Twilight temptress has never been shy about her love of marijuana.” “This former Disney good girl is now a girl gone wild.” “She loves to booze, party and dance. She will drink until she’s blacked out and can’t even stand up” “haute headbands” “smooching the Biebs”

Angelina Gets Wasted: “Slumping over in her chair, eyes half-closed, Angelina Jolie hardly looked like the poised, glamorous actress her fans know and love.” Oh for fuck’s sake, it was only the SAG Awards. “She was downing glass after glass of red wine. Brad even caught her sneaking sips from a bottle of Grey Goose vodka under the dinner table!” Sounds like a pretty dope prom night to me. “Seeming more like a wild sorority sister than a mother of six, she could barely stand by the evening’s end.” Somehow I can’t picture free-spirited goth chick Jolie in a sorority, unless it’s to go all Nancy in The Craft on some Kappa Kappa Gammas. “Angelina had to be held up as she stumbled out of the theater. Brad was absolutely mortified!” Moneyball y’all. “Sadly, Brad wasn’t surprised that Angelina, 36, destroyed his special time to shine” and forced him to babysit her all night. “She wants Brad’s attention focused only on her, and she’ll do anything to get it.”

Misc./Etc.: “I got a sloppy tan” “Chin up Celine Dion: at 43, and three kids later, your bod is insane.” “Jamie’s dress is so long, it’s befriending dust bunnies!” “he was spotted flirting with three different women on-set.” “bummed to see him wearing a sweater — and pants!” “Taking a bat nap?” Katy Perry: “Hey Tim Tebow, my parents say hi!” “I looked like C-3PO” “He’s nothing but a temporary plaything” “She could bring cleavage and relevance” “Attack of the lollipop heads” “the glitter, the public facade and the sadness in her eyes” “Breakfast of champions or go-go juice?” “They party together, hit on guys together and have a very unconventional relationship.” “haggard, black-clad” “making plans to meet up with a stripper!” “She’s becoming more and more absorbed in her self-image” “She acted like a prissy bitch” “They’re wild for meatballs!” “faking everything, including her emotions” “Women are like onions.”

Kim Kardashian & Tim Tebow: “Kimbow? Tardashian?” After Kim’s marriage to Kris Humphries collapsed, she’s been “firing off Tweets” such as “On my way to church with the girls!'” and “I want to start a Bible study group with my friends!” I LOVE MY FRIENDS! “Kim’s sudden display of piety may have an ulterior motive: that the sex-tape icon, 31, is trying to sack Tim Tebow, the super-religious Denver Broncos quarterback.” And make another sex tape? “She thinks Tim’s hot and knows dating him would really boost her image. And Kim could really use some help in that department.” Kim’s fetish for football players is obvious, “but hooking innocent Tim requires more than the standard play.” Sounds like a Cruel Intentions sequel that I would watch. “Tim’s different. She can’t just use her sexuality.” She has to use … Jesus power. “Kim thinks Tim is a dream. She appreciates his courage to weather criticism about being publicly religious.” But will Tim take the big-bootied bait and learn to Tebow at the altar of Kardashianism? “Kim’s not Tim’s type at all. He likes down-to-earth girls who aren’t high maintenance. And the sex tape is the type of thing that grosses him out.” But when Kim “decides she wants someone, she goes out and gets him.” Down on his knees even.

J.Lo’s Breakdown: Lopez was spotted “crying on the balcony of her Miami hotel while talking on the phone to her 3-year-old daughter Emme.” On Today she told Matt Lauer, “I spoke to my daughter yesterday and I shed a tear. I miss her so much.” Jenny from the block has had a “really intense” year, “coping with shared custody of her 3-year-old twins, her American Idol duties and her new talent search reality show Q’Viva!” which she cohosts with ex-husband Marc Anthony. “She’s been on the go non-stop. In a way that’s helped her deal with the emotions initially, but now they are starting to come from the surface. She can only run from her feelings for so long.” There’s no geographical solution to a J. Lotional problem. “She can’t stand being away from her kids. She hates that she can’t be there for them every moment anymore, and she’s blaming herself for that.” Plus she might reconcile with Marc since she’s been working so closely with him. “He’s back to being charming. It’s all confusing for her. She’s facing the question of whether they should give it another chance.”

Misc./Etc.: “Brian Austin Green — like the fabled elephant — never forgets” “She already makes, like, a billion dollars” “looking trim but a bit fried” “tat artist Bang Bang” “he’s not shy about his body” “She fell in love with Africa” “She’s lucky she had the pipes!” “I had a chocolate pizza” “When an animal knows they have found a human soul mate” “His cake was shaped like a beer can” “The happiest mug shot ever!” “dutiful boy toy” “It’s all fake in my opinion” “Billy Joel lyrics inked on her rib cage” Tracy Morgan: “Something inside of me can’t feel for a computer monkey” “addicted to snorting baby powder” “the same team responsible for the initiative that killed Osama bin Laden” Stevie Nicks: “I want Reese Witherspoon to play me” “It’s visible in flip flops and yes, very meaningful” “Duchess Kate was named Hat Person of the year” “Ever had the urge to slather dragon’s blood on your face?”