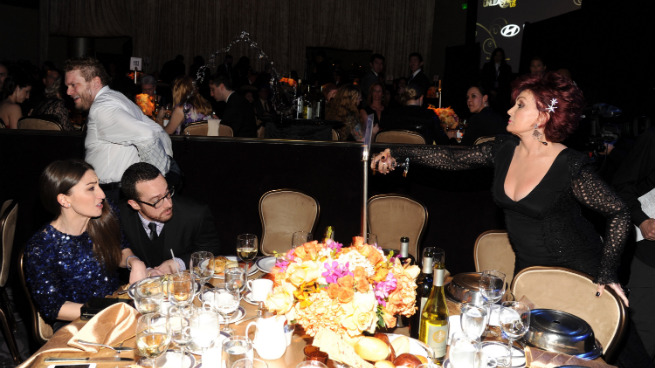 The hall of famous people’s troublemaking brothers includes gadabouts like Frank Stallone, Roger Clinton, and Stephen Baldwin. Joining them now is Jordan Feldstein, brother of Jonah Hill (né Feldstein). Jordan, who is six years older than Jonah, is a music manager who represents Maroon 5, Robin Thicke, and other sweaty guys. (He isn’t exactly a hanger-on, since he runs his own management empire, Career Artist Management.)

Although he didn’t go to the actual awards show, two of Feldstein’s clients performed at the Grammys on Sunday: Thicke (with Chicago) and Sara Bareilles (with Carole King). Feldstein did, however, hit the Grammy party circuit, attending the infamous Clive Davis party at the Beverly Hilton. During the party, he got into a confrontation with fellow music manager Sharon Osbourne after fighting with her daughter Kelly. The Osbournes claim to have been defending the honor of Jack Osbourne and his wife, Lisa Stelly. Sharon dumped a plate of food (or soup, depending on which account you read) on Jordan’s lap, and then tossed a glass of water at his head. Kelly just went through a big breakup, and Sharon is always down for a scrap, but it’s possible that Jordan insulted Jack, setting off a long chain of fame-adjacent anger. Bareilles, who was present when food hit lap at the Davis party, informed Feldstein the next day that she no longer wished for him to be her manager. Bareilles’s career has taken off this year, after rumors that Katy Perry’s “Roar” had ripped off the Bareilles song “Brave” led to a second life of sales and play for her third album, The Blessed Unrest.

A friend of Adam Levine since childhood, Jordan has been managing Maroon 5 from day one and recently became producing partners with Levine. That means he is probably loaded with the kind of music industry money that nobody makes anymore except for bands like Maroon 5. I’m talking about private jet orgy, champagne jacuzzi, Eagles money. Jordan was in the news earlier this year when he got quickie married to Francesca Eastwood, daughter of Clint, in Las Vegas. When she sobered up, Eastwood filed for annulment. The Feldstein brothers’ dad was also in the music business; he was the tour accountant for Guns N’ Roses.

All this was going down as Jonah, who is in the spotlight now more than ever for his well-deserved nomination for The Wolf of Wall Street, was in New York hosting Saturday Night Live for the second time. Jonah’s first movie appearance was in I Heart Huckabees, a role he got an audition for through his best friend Jake’s dad: Dustin Hoffman. Jake Hoffman appears in The Wolf of Wall Street, playing Steve Madden. However things turn out for Jordan, it’s clear both Feldstein brothers made financially wise choices in childhood best friends.