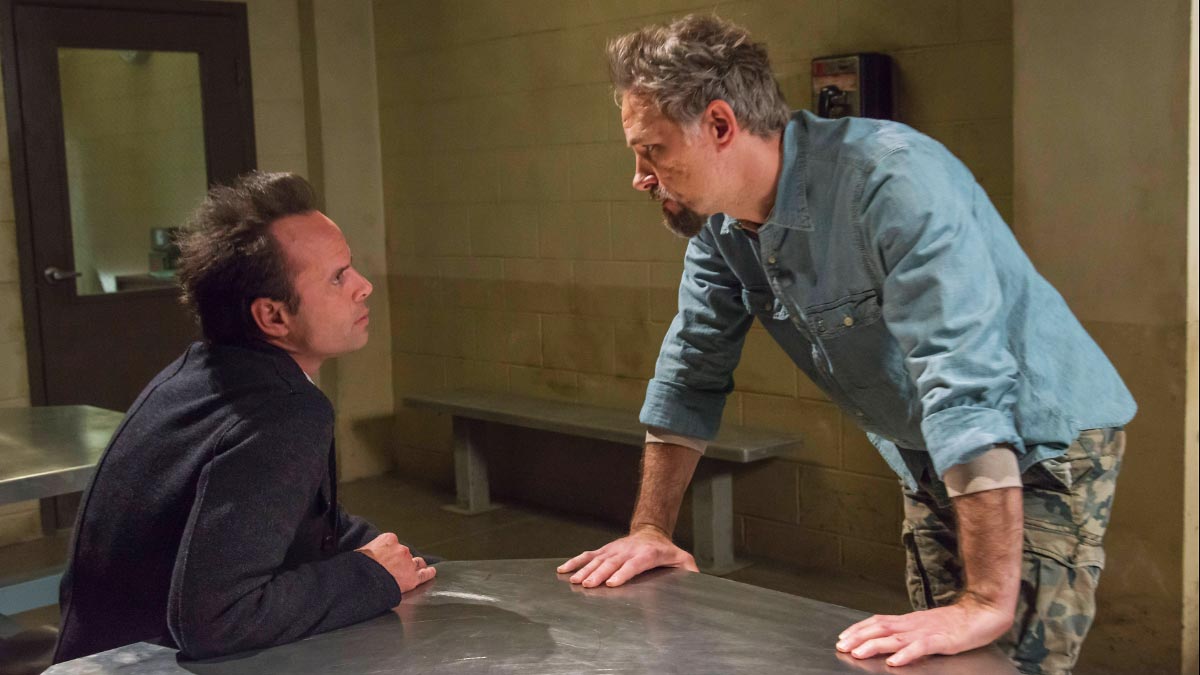 This week: The Raylan- and Boydspheres eddy together in the hunt for Audrey’s benighted day manager. Fully half of this hour hangs on “Webelo” being a funny word to say; the other half is about machinating the two leads into a room together for some quality time. This is not a complaint.

The episode opens with Dewey having managed to lure poor Wade up a hillside with promises of retrieving a hidden cash stash and skedaddling, leaving Harlan to the Florida Crowes, a scene with a genesis we are very sorry we do not get to see. What we get instead almost makes up for it: Dewey insisting the loot is buried and Wade bringing along a flimsy Boy Scout camp shovel to retrieve it, plus some precious back-and-forth on what, exactly, constitutes a Webelo. Dewey, being Dewey, doesn’t possess sense enough to let Wade finish digging a Wade-size hole before beginning his murder attempt. Dropped ammunition, ill-placed gunplay, and bludgeoning ensue. The Webelo shovel bites it. Wade does not, though Dewey fails to realize it, scuttling off for a crowbar to finish the job and returning to find that the presumed corpse has risen and dragged itself off into the brush and out of sight. There’s another delightful comedic moment, with Dewey feebly calling after Wade in the dark (“Where are you, man, this ain’t funny!”) like he might come out (and it’s Wade, he might!), before tumbling ass over teakettle down an embankment that has been carefully framed to look like Kentucky and not California. (God bless and keep the folks who have the job of making places like the Tejon Pass look like they’re 2,000 or so miles away.)

When Dewey regains consciousness, he commences praying. His heavenly requests include two regular cuss words and one religious one, and we’ve all been there, which the Lord apparently gets, because lo! That’s fresh blood on a nearby boulder! And there’s his quarry, not too far off, in visibly bad shape! It is Dewey, so when he comes to and realizes he’s lost you kinda figure he’ll end up thinking he’s lost while separated by a stand of pines from a four-lane highway and that’ll be what re-thwarts this whole adventure, but no: A young boy and his four-wheeling parents mistake Dewey for a victim of anything but his own inept murdering skills, and whisk him away to civilization, leaving a dying Wade just out of their sight.

Dewey returns with Daryl to confirm Wade’s death, granting a grateful audience a second Webelo discussion. Dewey still hasn’t thought far enough ahead to figure out why Daryl wants him to kill Wade quite this much. Approaching a B&B in the general vicinity of where Dewey got scooped up, the cousins spy a cluster of law enforcement vehicles, a coroner’s van among them, and beat a hasty retreat.

The Quest for Messer

The lawmen at Grandma Wiggin’s place have been summoned by Raylan, who’s been set on Wade’s trail by Art and Vasquez, who’ve been using Wade as a C.I. for reasons that defy credulity. But let’s let the flimsy premise slide for the following reasons, in no particular order:

• Raylan is at his funniest when irritated; Art when he’s the irritant.

• Raylan and Wade’s history necessitates Raylan taking along a buddy for the hunt, in the form of Tim, who actually gets to say some lines and jump around a little bit this week.

• Wade’s dealings with Boyd give Timothy Olyphant and Walton Goggins a shared scene for the first time this season.

The marshals’ pursuit takes Tim and Raylan to Wade’s place, where they meet Danny Crowe; Danny Crowe’s underbutt; and a well-trained, happy, and very bitey dog named Chelsea. (Raylan professes his desire to see a sitcom starring Danny and Wade sharing living quarters, proving he is a frequent Grantland reader.) The next logical place to look is wherever Boyd is, though the season’s first Raylan-Boyd scene would work a lot better if it brought higher stakes. We know Boyd didn’t disappear Wade. Raylan believes he knows the same thing. The marshals do get Wade’s burner number off Boyd, leading Raylan to the woodsy B&B, where a smattering of black birds in the sky deal out heavy symbolism and helpful plot advancement, which brings us back around to that coroner’s van spotted by the Crowe boys, and a tarp being thrown over what does appear to be a dead Wade. Raylan looks a little sorry, in that pinched, slightly sheepish way of his. We are too; Wade has been the best source of comic relief this season, aside from Rachel trying to paper-train the protagonist.

• An upright, washed-out Johnny Crowder replaces the opera-favoring, headphone-sporting lawyer in Ava’s jail visitation scene this week, with Boyd unsuccessfully trying to reel Johnny in close enough with the promise of shared drug profits to (presumably) get yet another relative of his killed off the show. Ava and Boyd don’t speak before Boyd leaves, but he hasn’t stopped looking out for her: A half-pint prison guard (played by Danny “Jonathan from Buffy and also Mad Men” Strong) who intends to violate Ava’s person is interrupted in preparation to commit sexual assault, and is later beaten by a female guard who tells him Ava is protected.

• If you were wondering where this Nicky Augustine leftover murder trail affair was going, here it is: Art hightails it up to Detroit, where Marshal Ed has caught Will Sasso, who still makes a remarkably convincing Canadian mobster, and who says Sammy Tonin used to brag about having a Kentucky lawman in his pocket. (This isn’t the first time Art has heard accusations of Raylan being on the take, but.) Sasso also places Picker in Kentucky, hiding out with Duffy! RV slumber party!

• Raylan attempts to menace the Crowes out of Kentucky, which goes about as well as kicking HR out of the state did, but does pluck from their custody wee Kendal Crowe, a moppet with a Leonardy mouth beyond his years who’s still waaaay too young to be tending bar. “That boy done seen shit you and I can’t imagine,” says Daryl, as though this is an argument in the family’s favor.

• Carl, sent by Boyd to tail Johnny, leads his boss to what looks like a friendly meeting between the last Crowder cousin and Hot Rod. The episode closes with Carl and Boyd beholding the heap of bodies they’ve apparently been squirreling away since the season premiere.

Wade, damn it all, and his Webelo shovel. At this point, about all that can be said in either’s favor is that they aren’t topping Boyd and Carl’s corpse hoard.

The sacred shock is getting too long to hold itself upright, making it a poor oracle, though it looks immaculate next to whatever the hell is happening to Raylan’s. Between Allison’s and Monroe’s homes, there’s not a bottle of clarifying shampoo to be found anywhere you’ve been sleeping, Marshal?

MARA: Looking radiant and perhaps a touch too perky as she tries to maneuver her way back across the ocean. Dinner will be ready soon, and does her devoted husband want to continue pursuing the legal case against Ava Crowder? It happens he does!

ALLISON: We may not be entirely buying her whole push-pull deal, thanks to Rachel’s timely warnings, and Allison’s own confronting of those suspicions. But based on Allison’s one scene with our behatted hero in this hour, Raylan sure is!

AVA: While Ava is frosty with her fiancé, objectified by Johnny, and more than objectified by Officer Half-Pint, that lady cop who’s wise to Ava’s protection orders looks like she could take out all three of those gents with a baton and a cigarette butt.

Blink and you’ll miss it: Boyd and Tim get up a game of Scrabble when left alone in the bar. Tragically, none of the words are visible.

Still stuck on Dewey getting Wade up the mountain in the first place. There’s a doleful charm to the thought of Wade, his upper body freshly removed from Audrey’s dryer, buying into the idea that he is not going to his death.

1. “Aren’t you a little short for a stormtrooper?”

3. “Jesus, if you help me find him, once I kill him I swear I’ll straighten up.”

5. “Let us start with how you’re gonna make reparations for me taking a belly full of buckshot on account of you finding Jesus for a minute.”

Now that we’ve had some quality Givens-Crowder screen time and seen that Tim is still around, a fervent hope remains that more comedy will be mined from the Raylan-Rachel Roommate Situation. And haircuts for everybody, please. Y’all aren’t hippies.

Seriously, what all did we miss that led to Dewey getting Wade up the hill in the first place? How many bedrooms does that Duffy RV have? Is Mikey relegated to a sleeping bag on the roof at this point, or to resting underneath the vehicle like a watchful dad on the Oregon Trail, or to curling up on the engine block like a cat? Did Boyd teleport into Carl’s car? Kendal and Loretta are destined for BFF-dom, right? And what do we think of Danny Crowe’s future as a Kentucky crime lord? He’s a heartless killer, loves animals, is clearly free of body image issues, and has the moxie to try to sneak up on a federal lawman on a path that involves two passes through a beaded curtain.

Filed Under: Recaps, TV, Justified, FX, Timothy Olyphant, Walton Goggins, Raylan Givens, Sure, We Can All Pretend That Looks Like Kentucky, Holly Anderson

Jonah Hill's Brother Got Into Quite the Dustup Over Grammys Weekend