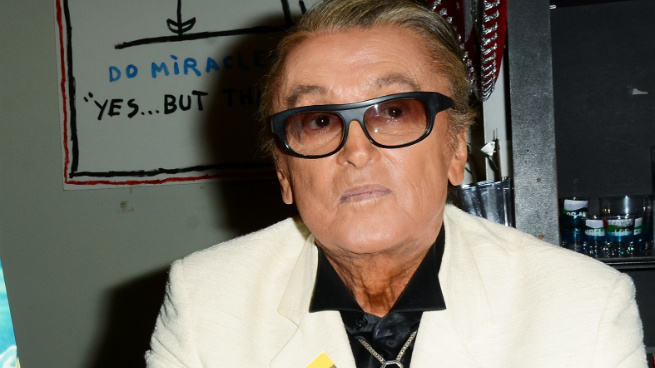 Robert Evans, your favorite bronzed octogenarian, is developing a pay-cable TV series about ’70s-era Hollywood. Deadline reports that the producer (The Godfather, Chinatown, Rosemary’s Baby, Love Story) and former studio exec has made a deal with Fox 21, managing to compare it to Entourage (this project is “much darker”) and Casino (similar “creative tone”) in the same paragraph. And because he’s still able to charm the venom out of a fire ant, Evans gets a personal Deadline shout-out for acknowledging the reporter, Mike Fleming Jr., for championing the manuscript of The Kid Stays in the Picture. (Evans sent a signed copy of the book, which “alongside an actual machete hand-signed by Danny Trejo, [is Fleming’s] favorite memento from this job.”)

The show will hark back to the grubby old days, smack-dab in the middle of the Hollywood Renaissance. That means Mafia ties, drugs, sex, and all of that good pay-cable stuff. No writer or network has been attached yet. Evans’s autobiography doesn’t serve as the basis for the series, but anecdotes from his life will be slipped into the fictional story, of course. Evans published a follow-up to his 1994 memoir The Kid Stays in the Picture last November: The book, titled The Fat Lady Sang (written after Evans suffered three strokes in 1998), took a bit of a hit from the New York Times for containing Evans-isms even more stylized and wacky than in The Kid. (Janet Maslin pulled a good example: “Them mobs of girls, busting through them ropes, grabbin’ and screamin’ for my autograph.”) But no matter how Evans tells his stories, it’s hard to deny that he’s got some of the best ones out there: cocaine trafficking, a link to a murder, and love stories both truncated and sustained.

Because Evans has become such a character, as though he’s been fermenting in his own juices and becoming more potently himself over time, it was tempting to write this in his native tongue — but someone got there first, and hats off to them. Instead, here’s a selection of riffs on Evans to psych you up for Bobby Hollywood’s Next Big Thing.

Bob Odenkirk as Robert Evans as God: “Basking in praise at the Red Sea one minute, and then vomiting in a john next to Mick Jagger at Studio 54 the next. Oh man, what a life, what a ride it’s been.”

Remove the earmuffs now and skip ahead to 6:00. This one is from Orson Welles’s unfinished last movie, The Other Side of the Wind, which features a character played by Geoffrey Land that was based on Evans, by Welles’s own admission. Turtlenecks and tinted glasses: That’s pussy-bait right there. (Sorry, I should have said that you could remove the earmuffs but keep the eye patches on.)

Dustin Hoffman wags the Bob. There’s alleged footage of Hoffman impersonating Evans on a Marathon Man gag reel, but YouTube isn’t helping me out. The two are no longer friends, and Evans told the L.A. Times that he was convinced Hoffman also spoofed him in Dick Tracy: “‘He played Mumbles for scale just so he could do me and exaggerate it. Nice compliment, huh?’ Evans said, his voice low and edgy. ‘I don’t mind if Warren Beatty plays me. But this midget? He makes his living off me.'”

Michael Douglas in Ghosts of Girlfriends Past: “Rule number one: Don’t look at ’em. Dames are like horses, they spook easy.”

Entourage offered Evans a cameo, which he declined. He did agree to let them use his house for filming, but when he saw Martin Landau’s portrayal of him as a washed-up joke, he was piiiiiiissed. HBO denied that Ryan was based on Evans, but it’s hard to argue with the you-bet-I-ams.

I love Evans, so I can’t leave you with Bob Ryan. He’s way too pale, and he doesn’t talk enough about hotels. See you at the Polo Lounge, baby.

Filed Under: TV News, TV, Robert Evans, The Kid Stays In the Picture

Steve Coogan and Rob Brydon Bust Out Their Dueling Michael Caine Impressions Again. And Throw in Some Bale and Bane.