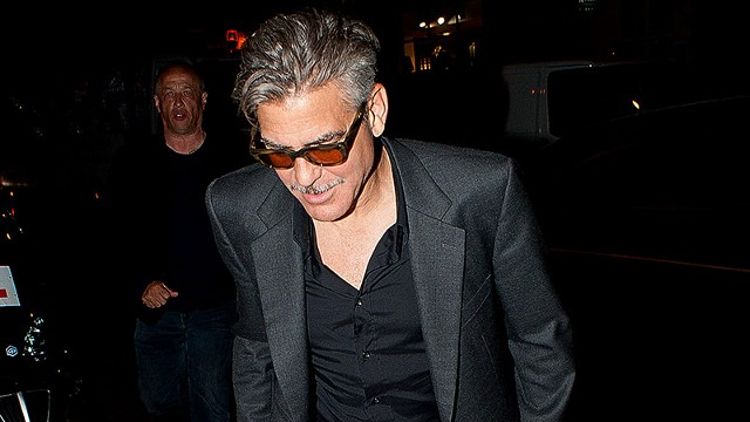 George Clooney & Eva Longoria: “Back in March — while he was still dating Stacy Keibler, 33 — Clooney, 52, connected with Eva Longoria, 38, in Berlin.” Oh shit! “George told her that he was still with Stacy, but had plans to break up with her — and was interested in being with Eva. Then he pursued Eva with texts and calls, though they never hooked up.”

“Longoria wasn’t comfortable dating someone else’s man — and she wasn’t about to wait for him to be single.” Instead she began dating 34-year-old Ernesto Arguello, the main contestant on Ready for Love, a dating reality show she produced. Blind items suggested that Clooney and Longoria were cheating on their respective partners with each other, but that Clooney got cold feet about going public with Longoria. Not too shocking considering Clooney has a long-established pattern of only dating C-list women, and Longoria is at least a B. Eva is smart (she just got a master’s degree in Chicano studies) and doesn’t need Clooney just for the publicity, like most of George’s girlfriends do. It seems like Clooney is afraid to date a woman whose level of fame and age are closer to his own. Longoria’s romance with Arguello is said to be revenge for Clooney backing out of their affair, although he did finally dump Keiber. Now that he is single again, will he be able to lure Longoria away from her own C-list reality-star boyfriend? Or will Longoria see him for what he is — a cad who hasn’t had a relationship last more than two years in decades — and decide not to risk it? Longoria has her own money and career, so Clooney wouldn’t be able to control the relationship as easily as he seems to be able to with his less famous girlfriends. Hmm … Longoria might not be able to win Clooney’s carnival game, which is always rigged in his favor, but if she wants a shot she’s playing it right so far.

Adam Levine Gets Engaged to Behati Prinsloo: “Just three weeks after [Adam Levine] and Behati Prinsloo rekindled their relationship, the Voice mentor, 34, popped the question with a vintage sparkler over the July 13 weekend in L.A.” Everyone was shocked, especially since Levine had been dating Nina Agdal, 21, in June. Prinsloo says, “Last night, I forgot I slept with my ring on. I woke up and went, ‘Oh, hello!'” Levine’s friends are “stunned” and “dumbfounded,” which sounds like they don’t exactly see this lasting forever. Although they had broken up, “They never stopped talking. Adam realized he really loved Behati.” Levine got with South African model Prinsloo after more than a year with “Russian stunner Anne V.” Both are Victoria’s Secret angels, which ought to make things pretty awkward backstage this year. Levine is a “serial model monogamist” but “knew he wanted to propose.” Prinsloo was waiting. She’s “a relationship girl and knows they’re meant to be.” GOOD LUCK GIRL!

Alyssa Milano’s Dream Job: Her ideal career is “shortstop for the L.A. Dodgers.”

Connie Britton: “I do aspire to be the ‘cool mom.’ I’m sure I’ll probably end up just being embarrassing.”

Claire Danes Shares Life Advice: She said the combined wisdom that Meryl Streep, Susan Sarandon, and Jodie Foster gave her is “You have to ask for money because there’s always more money and they won’t give it to you because you’re a girl!”

Misc/Etc: “It was daring and feminine.” “Most days I don’t get around to makeup” “A self described product whore” “She can get wound up” “Their romance is pretty extreme” “I can’t smoke any weed…Damnit!” “Forbidden fish!” “my mom’s Sunday sauce” “a very successful hat designer” “It’s like weed. Too much is not good for me.” “a huge string of snot” “Now that’s Orlando magic!” “a pet portraitist!” “hanging out and hooking up” “the grooms set the tone” “with whom she made out two days earlier over dinner at Nobu!” “I can’t put him in a time machine!” “the man Hartsook considered a potential husband told her he was walking away from their relationship, crushing any chance of a future together” “LOSERS IN LIMOS”

Josh Brolin Smoked Heroin During The Goonies: Brolin “got involved with heroin as a teenage member of a surf gang called the Cito Rats.” He said, “I was the last [member] to get into heroin — I smoked it — and the first to get out. I was around 16 or 17, so it was around the time of The Goonies.”

Tom Cruise & Jessica White? The Sports Illustrated model was spotted at the New York Scientology Celebrity Centre smiling for cameras. A day before, she posted a picture on Instagram from Eyes Wide Shut and commented, “I don’t care what anyone says!! ‘eyes wide shut’ shot by the Late great Genius director Stanley Kubrick, my favorite guy Tom Cruise and Nicole Kidman is an artistic masterpiece with deep layers of hidden meaning, that I want to explore more of!!!!! #inspired as an artst 2 b better #amentogreatness.” Amen.

“Tom got the message” and “immediately offered to be Jessica’s private Scientology tutor. And when they first met up, there were immediate fireworks.” Tom is “totally smitten” and “believes he may have even found a replacement for Katie Holmes. He’s purposely remained single for a while now because he wanted to wait for the perfect girl. And he believes Jessica could be that woman.” Well good, that’s not creepy at all. Can’t be worse than dating Sean Penn!

Misc/Etc: “JENNIFER FLASHES SOME SAGGY SKIN ON HER USUALLY LITHE LEGS” “Sad And Solo” “do better with the bribes” “give him oral sex” “the actress’ not-so-highly anticipated memoir was rejected by numerous publishing houses” “Many non-Scientologist parents were outraged that they weren’t informed of New Village’s religious curriculum” “So much for fishing trips and lemonade on the porch” “busted out of her maillot” “from the frilly bikini to cherry-red Vespa” “An A-list girlfriend no longer” “Getting kissed by a whale” “He’s addicted to her body”

The Bachelorette: Desiree Hartsock claims “I’ve been in the bridal industry for so long. I’ve become jaded. Sometimes people spend way too much money.”

Misc/Etc: “OK to follow ex husbands on here?” “they celebrated over burgers and champagne” “PETA MURGATROYD” “pushing the ‘real feel’ temperature” “unleashes his charms on an unsuspecting ‘lady'” “NO. 1 WITH A MULLET” “a monkey, snake, spider, and giraffe” “You have beautiful nipples” “the World’s Largest Bachelorette Party” “Justin Bieber preps for his new inner arm tattoo — his mother’s eyeball” “It’s clear he wants her to suffer” “But they’re not even having sex right now” “racked up a $2,389 room service bill” “She doesn’t seem able to care about anyone besides herself” “melts, tastes, and stretches” “secretly a cougar hunter?” “I JACKED JESSICA RABBIT!” “looking like a grizzled graybeard” “I don’t cook!” “she invited guests to participate in a three-week vegan cleanse leading up to her July 2 wedding”

Ryan Reynolds & Blake Lively Expecting? “It’s pretty obvious Blake is expecting a baby. We’re convinced she’s just waiting to pass the first trimester before she makes an official announcement.” Her friends “tell her to wait until after she turns 30, but Blake is crazy about Ryan and she wants to be a mom. She always has!” OK. Reynolds wants a big family because “he wants them to be like a big team and go on the road.” Lively and Reynolds both come from big families, and he wants to “re-create the childhood he had” and “take them all camping in the summer.” OK. “He was ready to marry Blake almost right away but he had to make sure she was on board for having babies as soon as possible. To his intense relief, she was, and it’s been a whirlwind love affair ever since!” OK. Scarlett Johansson and Reynolds reportedly ended their marriage in part because ScarJo didn’t want to have kids yet. While they were still married, she said, “I’m not having kids any time soon. I’m in a nice relationship. I’m working a lot.” Lucky for Reynolds, Lively has no such qualms. She’s “so excited to have a family to bake for!” I wonder if Reynolds’s recent double box office bombs will affect their plans at all. XOXO, Box Office Gossip girl.

Misc/Etc: “Don’t you love when you’re sweating out a workaday summer and pals post pics of their fabulous vacations?” “they leave themselves open to attracting weirdos and psychopaths” “Kanye West has never been one to slink slyly into the shadows” “sultry yacht shot” “He has that old-school dress” “hanging with Bono and buds at George Clooney’s Lake Como, Italy villa.” “My style is pragmatic” “The rage I felt then, I can use to play Wolverine” “a parody of the UTZ snack food logo” “on the steaming hot roof” “I always stay classy and feminine” “Love is my religion”