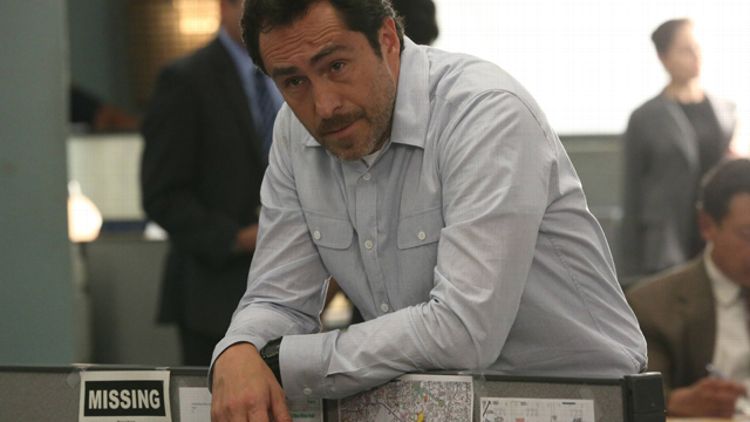 For most Americans, and I’m talking about everyone from farmacía-hunting lax bros in San Diego to tough-talking pundits in D.C., the border is an abstraction. It’s a talking point, a threat, a dare. It’s not a real dividing line to be crossed, or navigated, or even considered. It’s merely something to be protected, threatened, or, most often, ignored. Those interested in traveling to Mexico tend to fly right over it on the way to a beach. Those interested in securing the homeland tend to stay as far away from it as humanly possible.

One of the things The Bridge has done very well in the early going is to illustrate how, for the citizens of El Paso and Juárez, the border isn’t an abstraction. It’s part of daily life. Some make their living policing it, yes, and others scrape together quarters and pesos selling candy and water bottles to those stuck in traffic on either side. But there are a whole host of people just like Adriana Perez and Alma Ruiz who cross the border every morning for work and cross it again in the evening to return home. It’s as regular a commute as the one undertaken each weekday by those in Brooklyn, in Alameda, or on Bainbridge Island — though with considerably more armed guards lurking on either end. For the legal economies of both cities to thrive, the border must remain at least partly open.

“Partly open” is also a redundancy. Something is either closed or it’s not. And, so far at least, the more successful characters on The Bridge are those who are more than partly open to the way the world around them really works: Marco with his rubber band morality, Hank with his unflappable shrugs. By way of contrast, the gringa women on The Bridge, Detective Sonya Cross and former hostess — not waitress — Charlotte Millright, are united in their rigidity. Due to her (still unnamed) condition, Sonya is a crowbar in a room full of Slinkies. Her dogged devotion to uncovering the hows and whats of her job is impressive but more than a little undercut by her complete inability to understand the whys. And just when Charlotte thought she had pulled herself up onto solid ground, she discovers she’s been living above a human ant farm of tunnels and trafficking. “I’m not like you,” she says to the fascinating, Padrina-type figure who is malingering by the horses after Señor Millwright’s funeral. “But you are,” comes the terse reply. Like many of the leads on this bilingual show, the two women are speaking the same language but not understanding each other at all.

“Rio” was a fine hour of television, moody and enrapturing with a steady, tactile sense of place. Under the watchful eye of Danish director Charlotte Sieling — who worked extensively on the original version of The Bridge — it was possible to feel the harsh sun beating down on the poisonous, desert crime scene, to taste the Freon in the El Paso PD office where Daniel Frye needed a blast of freeze in each nostril just to answer some questions. I’m appreciating the grace notes of tone and texture that elevate each scene above the occasionally grinding gears of exposition, like the sound of Rio, the doomed horse, running in circles while Charlotte tried to hold her ground or the way Deputy Matty Stokes has quickly evolved from a throwaway day player into much-needed comic relief.

Most shows these days debut with a single compelling question or premise — Who Killed Rosie Larsen?, say, or Why Is Kevin Spacey Talking At Me? — and then fritter away audience interest the further they stray from that central idea. So far, The Bridge is moving in the opposite direction. I remain generally uninterested in the marble-mouthed serial killer, with his too-cutesey calling cards (Beads? Was Marshalls sold out of thimbles?), odd cell phone demands, and wobbly motivations. (Killing the judge made his monstrousness political; killing these poor Mexicans in the desert makes him pointlessly cruel.) But it’s in the margins around the case where the fascination seeps in. I want to know more about the obviously paternal relationship between Hank and Sonya, I want to get the real story surrounding the fraying bond of trust between Daniel and his “haggard” boss. The wake, with the neon drinks being poured liberally into plastic faces, reminded me of one of my favorite crime novels, James Crumley’s Bordersnakes. No one could put a leather boot into the ass of privilege like Crumley; in Bordersnakes, the barons of West Texas live like kings on their sprawling plantations, throwing galas and putting on airs all while hiding their raging coke hangovers and hypocrisy underneath pristine ten-gallon hats. I’m hopeful that The Bridge will continue to expand its canvas like this, really roll up its sleeves and muck around in the untidy overlaps between lowlifes and high society, and between servants and their supposed masters. It’s telling that Charlotte sleeps in the big house but it’s Cesar who has all the keys.

Even more encouraging for a series primarily filmed in California was that the very best part of the hour took place in Mexico. Sure, the sidewalk gunshot was a bit much, as was the spilled crate of oranges around the dead body leading to the horse corpse later in the hour — Hollywood, relax: We’ve all seen The Godfather! — but it led to the wonderful scene in Adriana’s crowded home. Matthew Lillard plays the jittery, needy addict part of Frye expertly: He’s an asshole not because of who he really is but because of the armor the attitude provides, the way a stream of sharp words deflects attention from his piteously soft center. The hubbub in the kitchen, with Adriana’s sisters tossing their gatos left and right while her mother plied their guest with beer and tequila, was accurate in its depiction of Mexican hospitality and artful in the way it downloaded key backstory about a character through behavior, not dialogue. I loved how Frye, a veteran reporter, could only muster a single word — “How?” — when it came time to question how Adriana became who she is. In her life story, as in most of the plots here, there are no straight lines. Even after multiple cervezas, Frye could probably edit everything she said down to a taut 800-word human interest story. But the mixture of surprise and respect on his face said a great deal more.

What I liked least about “Rio” was something that, through two episodes, had been the best part of The Bridge: Detective Marco Ruiz. Something didn’t seem to track with the shuffling good guy who buys flowers for the office receptionist and the rage beast who came within seconds of putting his fist through Steven Linder’s sideburn. I didn’t recognize the two as the same character, and that’s not only because Demian Bichir seemed to have had a haircut and a shave midway through shooting. (I hate being the guy who picks nits at continuity nonsense like this, but it stood out.) There’s bending the law and then there’s smashing the lock on a suspect’s trailer. I think the relationship between Ruiz and Cross works best when his rough patches work like sandpaper on her sharp edges. This new tendency to go rogue leaves them, and the show, unbalanced just when it ought to be finding its footing. Similarly, while I appreciate the nuance intended by contrasting Marco’s steadfast refusal to take monetary bribes with his willingness to let Charlotte Millright slip him some tongue, I still found it confusing. That Marco has had multiple marriages — and felt the need to have his huevos poached — suggests he has a history of tomcatting around. (Not to mention the way Alma repeats “es bonita” about Sonya after their awkward introduction; she knows what her husband is capable of when left alone with a blonde.) Is Marco drawn to Charlotte’s money? Her oversize wine goblets? Her — wait, did I already make a goblet joke? What appeals to me about Marco is his ability to successfully navigate a world filled with sharks; it shakes my confidence and my interest when he starts throwing chum in the water himself.

But maybe that ambiguity is the point. Marco, finally free to investigate a case without institutional restraints, wants to keep his work in one country and his family in the other. But the two are already dangerously mixed up. Even by-the-book Sonya can’t keep a one-night stand from camping out in her office. (That one-night stand? Played by Jason Wiles, a.k.a. Skippy from the immortal Kicking and Screaming. Ding that!) And Steven Linder — whom I still think of as not guilty, though he may prove to be far from innocent — professes to be searching for lost girls but seems awfully committed to helping some of them go missing. The traffic moves in two ways over The Bridge. Those on all sides — U.S./Mexico, rich/poor, good/evil — would be wise not to forget it.

Lil' Clooney Goes A-Wanderin' ... and Other Absurdities From This Week's Tabloids