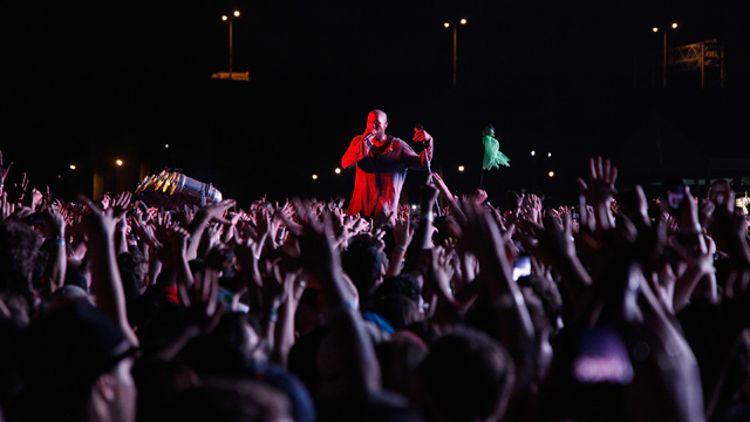 For its first two and a half days, the story at this weekend’s Governors Ball was the weather. The New York festival, now in its third year, is the latest in the apparently never-ending string of events attempting to blossom into the East Coast Coachella. And while that sounds like a perfectly reasonable idea in theory, events on the ground generally conspire against us. And by “events on the ground” I mean it always rains, and it sucks. On Friday, things got so bad that Governors actually had to cut off the night early, choking the East River with waves of ferries chock full of would-be revelers — many clad in not much more than cut-off shorts, tank tops, ceremonial Indian headdresses, and a thin, nearly imperceptible layer of MDMA — angrily tweeting. I wasn’t there, but the rain was torrential all night: In a different part of the city I witnessed an umbrella snap in half, then be spun into a fierce little mini-cyclone. Tragically, no one was quick enough to Vine it.

But by the next day the rains died down, and on Saturday and Sunday the event actually went off as planned — only, gorgeously, with every last stalk of grass on Randall’s Island having been mulched into treacherous layers of thick, oozy mud. It wasn’t exactly what the organizers had dreamed up (the Port-a-Potty zones were a particularly hellish kind of quicksand), but at least they stuck it out. Basically: We got to see Kanye last night, so all is good in the world.

Yeezus is only eight days away, and this festival-closing set was probably the highest-profile live gig Kanye will do during the album run-up. But if you haven’t noticed already, ‘Ye’s not too concerned with managing to grab your attention. With a couple of strategic spots — the SNL premieres, the multi-city video projections of his own face — plus the fact that the Yeezus stuff might just be Kanye’s greatest grab-the-nuts-flip-the-middle-finger-up moment yet, he’s already locked your attention in the trunk of his ’04 Prius. But if there’s another reason why he seems like he doesn’t give a fuck, it’s probably because he doesn’t give a fuck. In his own words: “Honestly, at this point, I could give a fuck about selling a million records.”

Note that all traditional album campaign stratagems have been suspended; there has been no officially released single, no videos, no (as always) media access. Because all he wants to do is “put an album out for the summer that ya’ll can rock to all motherfucking summer.” During the point of the set where he traditionally “start[s] complaining about shit,” he let us know: “we didn’t drop a single to radio, we ain’t have no big NBA campaign, we don’t even have a cover. We only made real music. Back then we used to go work on an album for like 5 months, then we’d come back and wait for the label to pick the perfect time to release it.” Now, though, “I ain’t gotta wait till when the label tells me I’m gon’ sell more records. Cause at this point I don’t give a fuck about outside opinion.” Of course, the anti-campaign is also a campaign.

Just today, “Page Six” had a report about the battles ‘Ye’s supposedly having with Def Jam on Yeezus: “Sources exclusively tell us that last week — just two weeks before the album drops — West brought in legendary producer Rick Rubin to help lay down additional tracks for the record … after months spent in Paris recording, West was still working in the studio … ‘Even by Kanye West standards, this is pushing it,’ said a music industry source.” Leaking this kind of chatter does nothing but burnish the manic-genius rep he’s already working with. And flashing a “Not For Sale” sign behind you is all good, blunt fun, but it’s not quite that simple, is it? In short: This all fits the branding. But there’s certainly something to be said for the fact that Kanye’s gotten big enough to where he doesn’t have to dance with the major label tiger. And that’s pretty rad.

Last night, along with all that serious ‘tude, Kanye brought a nifty little stage setup: rows and rows of what looked like searchlights, camouflaging his band within the equipment and blinding us at will. Above, the giant video screens would project his image, usually distorted into grainy black-and-white or run through some classic Kid Pix–esque filters. More often, though, we’d get a flood of images, as seen on his SNL performances, the most haunting of which was the crew of dudes in black Klan-like hoods. Kanye, meanwhile, was dressed in that loose-fitting, vaguely postapocalyptic style. Let’s just say he wouldn’t have looked too out of place on the deck of the Nebuchadnezzar.

Along with the previously heard “New Slaves” and “Black Skinhead,” we got three new songs. Here’s “Onsite,” an excellent nightmare-all-night-techno-party. According to “Page Six,” this samples “an old vocal track from kids in a Chicago church choir. We hear that lawyers last week had to track down the choir director and members of the Holy Name of Mary Church choir on the South Side of Chicago to get clearance for the vocals. Def Jam label chiefs were so worried about whether they would get rights to the track, producers re-recorded the vocals with a different choir to be used in case they couldn’t nail down an agreement with the Holy Name crew in time.” Check out what is presumably the sample around the 1:09 mark, a sub-10-seconds calm-of-the-storm.

No one knows the name of this one yet. If it’s going to be keeping up with the provocation on the rest of this album, though, it’ll probably be called, like, “I Killed Kennedy.”

“Black Skinheads” opened the set, and closed it, too — a perfectly grating Kanye move that I totally co-sign. That song, as they say, goes hard.