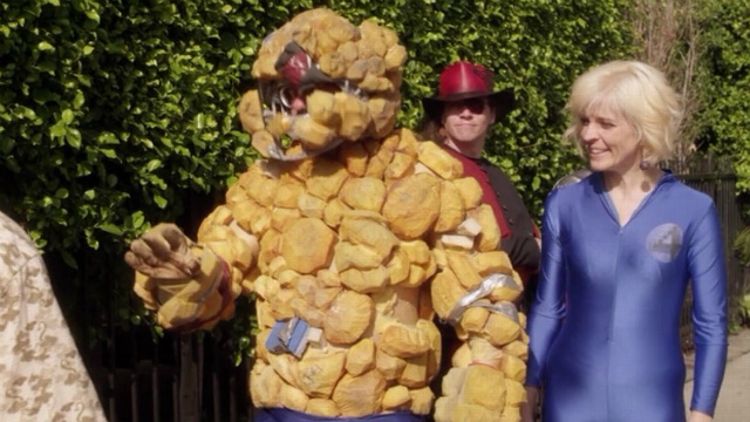 Before we dive into “A New Start,” let’s get some housekeeping out of the way. First: I have apparently been stubbornly mishearing the moniker of George Michael’s privacy software (if that’s what it really is). It is not “FaceBlock,” but rather “FakeBlock.” I still argue that the project fits in with the season’s central theme, exploring the nature of identity: What is maintaining one’s identity but to “block” what is “fake”? See also: this episode’s running joke about copyright infringement and character rights.

And that little grad school semiotics flashback brings me to my next point: I hope this doesn’t feel like homework for you guys, but watching the series on my own, constantly searching for hidden themes and self-aware references, largely fueled by coffee and popcorn and dressed in sweatpants — well, at least I’m not racking up any student loans.

This Tobias-centric episode actually leavened what has been becoming less of an Easter egg hunt and more of a forced march through hazily familiar territory. Tobias has always been something of a blank slate, both in terms of his character’s background and his character’s self-knowledge, and this episode was refreshingly whimsical and untethered in comparison to the freighted story lines we’ve seen so far. Yes, there were the required callbacks and Tobias’s story intersected in the plots we’re already aware of, but most of the humor was about Tobias, who really does live in his own little, even wee, world.

We begin with a John Beard–led stakeout, To Entrap a Local Predator, Orange County Edition: Supercreeps, set up to catch an anus tart — the unwitting Tobias, whose personalized license plate is a testament to the journey he began when the series left off: “A Nu Start.”

Flashback — indicated by a Netflix-ish status bar rewinding — to the Coast Guard jail (a thing? Still not clear) where the Bluth family gathered in the aftermath of Lucille’s foiled hijacking. Tobias and Lindsay determine to set out separately, yet of course wind up together. We get a brief, Rashomon-y interlude revealing how Tobias followed Lindsay’s India trip nearly step for step, from packing the matching luggage that’s inevitably mixed up, to disrupting Lindsay’s meditative thoughts on the plane, to being the tourist run over by her bus … it’s a little too on the nose, if anything. My favorite line of that set piece was a throwaway (I think?): When Tobias leaves the airplane restroom after an unsuccessful wrestling match with his sarong, another Anglo traveler in a similarly nontraditional wrap nods sympathetically, “Canadian?”

From Lindsay’s story, we know that the India trip puts the couple briefly back together for an experiment in borrowed luxury and shared desperation. Tobias gamely continues to pursue his acting career, his cheer and grit never quite making up for a total lack of talent. He presses real estate agent Ed Helms into service (an agent is an agent is an agent) to “tell people what a terrific actor I am because I can’t do it believably.”

The economic downturn, the Writers Guild strike, and the real estate agent’s suicide, far from indicating he should change course and “be realistic,” spur Tobias into action: “I shall redouble my efforts so that he will have died in vain!”

This leads Tobias and Lindsay to the MethodOne “acting clinic,” and the (re)introduction of Maria Bamford’s DeBrie Bardeaux.

Moved by what he assumes is DeBrie’s improvised monologue (but is actually her 12-step program story), he gives her some “notes” to improve her work — after all, the clinic attendees are promised, “If you’re good, you’ll get your juice.” He also lets on that he knows who she is from the quickie Fantastic Four adaptation in which she played Sue Storm: “I almost never get recognized as the invisible girl.” (Hey, questions of identity!)

DeBrie briefly overdoses on butter — “a Star Trek chess set’s worth” — and opiates, but Tobias sticks by her. “Some people struggle with addiction,” he consoles her, “other people are incapable of being nude.” The two determine to pursue their acting dreams by, obviously, posing for pictures as members of the Fantastic Four on Hollywood Boulevard … until they are chased to a lesser boulevard where “they don’t police very much,” on the lam from Marvel’s character rights–protecting process servers.

They briefly attempt to “go off-brand, change the names, and do a cheap, generic knockoff” — as “Rock Monster” and “Ability to Be Invisible Person” — but keep getting arrested. DeBrie, who has a law degree, wonders at some point if one can actually legally be arrested for this kind of thing, but in any case, the jig is up. In desperate straits, Tobias catches DeBrie taking off her Sue Storm costume and is appalled: “That would be like a fisherman selling his fishing costume!” (Is identity something you can shed as easily as clothes? See me in my office hours if you want to discuss.) She explains that she was actually going to prostitute herself: “I was going to have sex with him for money.”

Chastened by Sue’s need, Tobias returns to the Bluth family condo, ready to ransack it for plunder, but finds it — much as Michael did in an earlier episode — already ransacked. What’s more, he hears “what sounded like two ostriches making love to a hobbit.” Indeed, Lucille “Two” is flailing against an angry ostrich or, as she puts it, “Stop it, chicken.”

Tobias saves her, and in return Lucille offers him a position at her rehab clinic. When DeBrie finds out he rejected the offer — “I almost [bleeped] a guy for a hamburger!” — she leaves, declaring, “You’re worse than Marky! He couldn’t see me, you don’t hear me!”

She returns to her habits; Tobias sleeps on the streets, unable to take off his costume without help but presumably more comfortable than most other homeless dads.

He resolves to go home and see Maeby — and we return to Sudden Valley, the John Beard sting, and a slew of incest innuendos.

Much of the discussion around Season 4 has been about its binge-ability, the way it allows superfans to gorge themselves. We are a binge-y culture in general, of course, whether it’s supersize fries, extended-cut singles, or six iterations of Fast & Furious. Too much is never enough — and yet our lust for sensory overload can actually overwhelm our capacity for pleasure. There is a point in the bingeing process when the ecstasy of immediate gratification curdles into grim determination to complete a chore. Ask any drug addict.

I’m not saying this has happened to me with Arrested Development, at least not yet, but in talking to those who’ve shotgunned all 15 episodes, I’m grateful for Grantland’s decision to put a brake on the process. Now if you’ll excuse me, I need my juice.

Callbacks (the ones I could identify; please submit your own):

Ed Helms, Maria Bamford, and the clip from DeBrie’s Fantastic Four plays in front of the cast of MST3K.

The Kardashiad, Part 13: You'll Literally Ruin Your Life If You Get a Chest Piece