Stop What You’re Doing; Kanye and Kim’s Baby Probably Has a Name 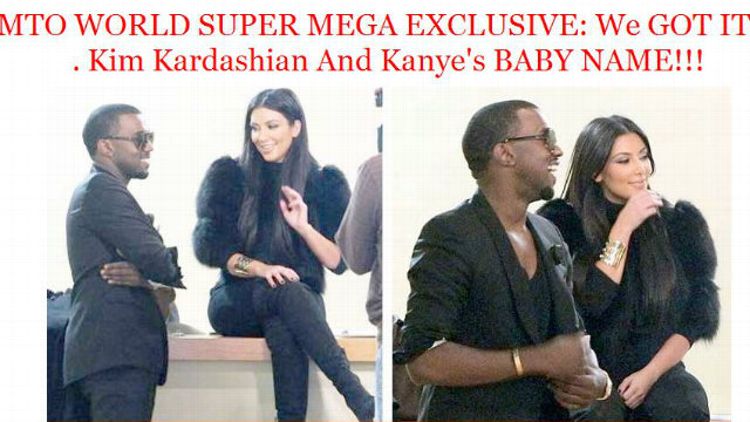 The Kimye baby, the one foretold in the prophecy, the one possibly conceived while recording the opening robogasms of “I’m in It,” the one to whom an entire season of reality television has been prededicated, the baby whose life force Bruce Jenner will quietly siphon until the nannies become suspicious about what he really means when he says “It’s time for another feeding” six times a day, has a name.

And that name is Kaidence Donda West, says MediaTakeOut, in the greatest scoop in the history of Kanye West and Kim Kardashian offspring-related news we should all be ashamed of caring about, even though we don’t, but we sort of do, he put out an album today, it’s all kind of part of the same exciting launch event. You knew there would be a K at the beginning; the family demands it. And you knew there’d be a tribute to Kanye’s beloved mother; decency demands it. You thought that maybe he’d squeeze a “Yeeza” in there somewhere, because this creature is nothing if not a living monument to The Nucleus’s creative powers, powers that now include the ability to conjure life itself from the uteral mixing board, perhaps with significant input from Jay-Z, the Daft Punk guys, and Justin Vernon, because you know how much ’Ye loves to collaborate.

Let us now return to our lives, secure in the knowledge that the savior who will usher in an era of untold peace and prosperity in the E! kingdom has a name befitting the brand. And it wouldn’t kill you to buy them the shower gift. That Kickstarted 50-foot statue of Kanye holding aloft his baby in one hand and a croissant in the other (he finally got that croissant) isn’t going to fund itself. The price of gold is really insane right now.