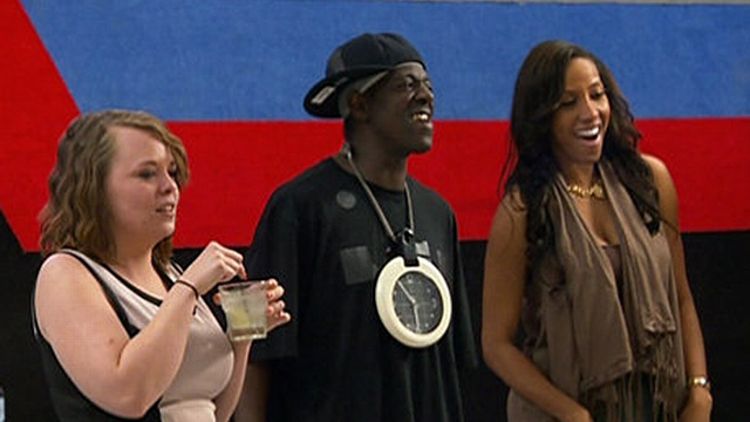 Why Are We Watching Her? She’s entered in-patient couples’ therapy with her boyfriend Flavor Flav.

How Did She Get Here? She thought it would be a good idea to stay with the kind of guy who’d star in his own dating reality show after he’d entered into a committed relationship, and then continued to stay with him for nine years.

What’s the Grossest Thing We See? Flav is not the most sympathetic character: Within minutes of meeting Teen Mom stars Catelynn and Tyler and learning that they’d placed their daughter for adoption, he berated them for taking away her opportunity to grow up with “two parents” (even though … the couple who adopted her are her two parents). And yet, when Liz can’t stop sulking on a therapist-mandated bowling trip, crawling under a table and eventually going outside to cry about Flav for not paying enough attention to her, she manages to be even more gross than Flav.

What Have We Learned? My contempt for Flavor Flav actually does know bounds, and Liz lives outside of them.

Why Are We Watching Her? She’s getting ready to throw a second-birthday party for her daughter, whose name — and this is not a joke — is Amzie.

How Did She Get Here? She has declared herself the Queen Bee of her circle of “friends” in nouveau riche Atlanta, so Lifetime has built a reality show around her.

What’s the Grossest Thing We See? Good lord, the excess of this party. The theme is “Old Hollywood,” which I’m pretty sure Amzie didn’t pick, and Emily is so strict about the presentation that she makes her husband wear a tuxedo. The second-grossest thing is when Emily lets her daughter drink Coke at a playdate and Nicole B., one of the other moms, calls her on it directly to her face. It’s not that you’re wrong, Nicole — obviously a 2-year-old child should not drink sugared soda — but you wait until Emily leaves and judge her behind her back like a decent person.

What Have We Learned? Let’s never go to Atlanta.

Who Is This Now? George.

Why Are We Watching Him? His family is in crisis and he’s reached out to (original Supernanny) Jo Frost for guidance.

How Did He Get Here? Despite the fact that he was, obviously, an active participant in the begetting of his five children, he’s decided that his wife should do virtually all the work of raising them.

What’s the Grossest Thing We See? Because he has special needs, George’s son Corey is not entirely proficient in using the toilet, but instead of chalking up bathroom-related mishaps to Corey’s intellectual delays, George decides the right way to respond is by berating Corey. As a result, Corey is terrified of George.

What Have We Learned? Monsters walk among us.

Who Is This Now? Jackie.

Why Are We Watching Her? She’s having an awkward sit-down with Kristi and Bill, the parents of her son Michael’s girlfriend, Kim.

How Did She Get Here? First, Michael got Kim pregnant. Then, because Kristi had also found herself with an unplanned pregnancy at the same time as her daughter, TLC invited Kristi and Kim to appear in this show. Finally, Bill and Kristi decided to discuss Michael’s plans for the future, and his ability to co-parent Michael and Kim’s child, in front of a camera crew.

What’s the Grossest Thing We See? I feel for Jackie, because her starting point is to declare that Michael isn’t ready to be a father (and from the little we’ve seen of him, earlier in the episode, she is definitely right). But the decision having been made by someone that Kim should have and raise this baby, Bill and Kristi’s concerns about Michael are not unfounded, in that he is essentially on the kid version of parole (he’s 17) because of a weapons charge. Jackie tries to explain this away by saying the charge stemmed from a trade of a belt buckle (what?), and that Bill and Kristi shouldn’t be concerned that he can’t finish his parole-ish program, even though he has failed at least one drug test, which was only positive for weed, anyway. Look, I don’t particularly care if a teenager smokes pot, but if the parents of the girl he accidentally got pregnant are trying to assess his fitness for participating in the care of this child, your defensiveness is not really that helpful, Jackie.

What Have We Learned? If this is the kind of permissiveness he was raised with, I’m starting to see why Michael has run into problems in life.

Who Is This Now? Bryan.

Why Are We Watching Him? He’s waiting to learn whether he’ll still have a job next week.

How Did He Get Here? His boss decided to abdicate responsibility for the HR decisions that should be hers alone to make, and let her employees do it by committee.

What’s the Grossest Thing We See? The show has already made Bryan look ridiculous by including shots of him removing a new, ill-fitting dental appliance and showing the camera the gaps of his missing teeth. But then, just as his coworkers are about to deliver their verdict — whether he’ll keep his job or not (and if he does get to keep it, whether they are imposing restrictions) — Bryan announces that he has to go to the bathroom, and then explains in an interview that, basically, he’s barely had control of his bowels all day. In case we weren’t sure what was going on, producers also include a shot of Bryan leaving the bathroom, and the sound of a toilet flushing.

What Have We Learned? Bryan’s coworkers’ pity for him evidently overrode what was made out to be their constant annoyance with him.

Who Is This Now? Amanda.

Why Are We Watching Her? She’s getting ready to renew her vows, and making the lives of everyone around her miserable in the process.

How Did She Get Here? She and her husband, Derek, originally had a shotgun wedding, as she calls it, so now she’s enjoying the chance to do everything over the way she would have liked to do it in the first place.

What’s the Grossest Thing We See? Out for dinner with a bunch of their friends, Amanda has too much to drink and starts describing her husband’s vasectomy. And I mean she describes it in so much detail that I’m surprised the network was allowed to broadcast it.

What Have We Learned? Getting/being/staying married to a woman isn’t always the best idea.

Why Are We Watching Her? She’s an eligible singleton trying to meet a nice man in the Hamptons.

How Did She Get Here? She’s taking a rare break from spending every minute with her parents to hang out with all her other female friends who also live with their parents.

What’s the Grossest Thing We See? At a garden party, Ashlee ends up sitting next to South American Clark Kent type Emmanuel, who is so attractive that Ashlee and her friends are willing to ignore the fact that he’s left the DKNY sticker on the lens of his eyeglasses. (He claims it doesn’t come off. It does.) Ashlee is so taken by Emmanuel that she is moved to phone her father, Hal, and announce on speaker that she’s met a marriage prospect. It is so cringey that Ashlee’s friend Joey has to point out how wrongheaded it is in front of Emmanuel. Who doesn’t leave, but who also doesn’t take Ashlee’s number.

What Have We Learned? Some people are destined to be single, and Ashlee may be one of them, in part because she won’t find any man she likes more than she likes her dad.