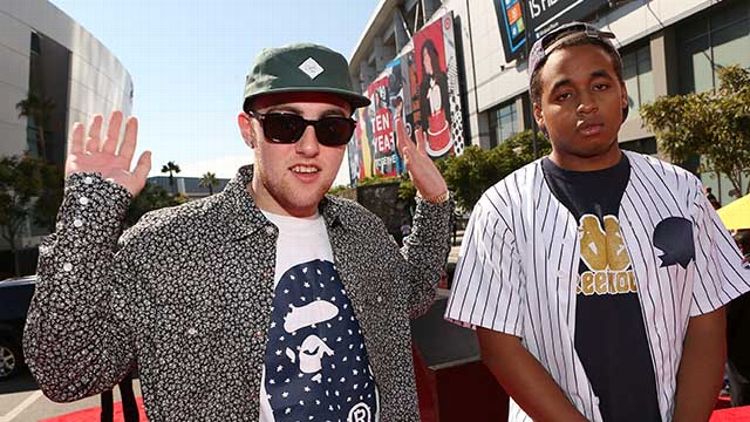 When I met Mac Miller two years ago, he told me he planned on being “Beatles big.” It was one of the funnier hyperboles tossed off in the 79 minutes, at least on tape, we sat talking about his career in the back of his tour bus in Denver. Throughout the weekend — which I spent tagging along behind the then-19-year-old and his crew in Colorado, on assignment for Billboard for what would be his first cover story — half the words out of his mouth were meant to impress someone. It started the moment we were introduced — with a grandiose announcement to the bus that a lady was on board, so everyone was to be on his best behavior — and was a constant throughout: elaborate, attention-commanding jokes; group consultations about who he should ask to open for him; excited accounts of text conversations with Drake (about sippin’ lean, of course). One afternoon I sat on the edge of the stage at the Ogden Theatre as Mac and his DJ, Clockwork, sound-checked; that day he spent extra minutes fooling around on a recently purchased, incredibly expensive guitar, requesting Clock play songs for him to solo over, checking casually, every few seconds, to see if people were watching him. Everything about the rapper — whose career was about to explode thanks to a YouTube account, a few high school friends, and some truly intimidating Twitter wizardry — was annoyingly charming, like a gifted, insufferable class clown who always gets his way. You just hope the damn kid grows into all that energy.

A few weeks later, as predicted, Mac’s debut LP, Blue Slide Park, (via Rostrum) sold 144,000 copies in its first week and landed atop the Billboard 200, making it the first independent album to debut at no. 1 since 1995 (that was Tha Dogg Pound’s Dogg Food). Judging by what he did soon thereafter— buy a mansion in L.A. — his obsessive, mostly teenage fan base wholeheartedly approved, and it paid off handsomely.

Of course, critics begged to differ. A string of merciless reviews, nasty Twitter exchanges, and likely countless jokes, whispered behind his back or laughed in his face, dug deeper than Blue Slide Park’s on-paper success had, and sent the rapper — so he told Complex in January — into a tailspin of rejection, which consisted of depression, weight gain, strained (or broken) relationships, and a steady supply of promethazine. Mac’s big entrance got him validation, but not, it seemed, the kind he had been searching for.

Mac’s hunger for approval, and his ability to get it, is a trait most rappers (and most artists for that matter) share, but few display it as earnestly. It’s one of his most charming personality traits, but it’s also proven to be his artistic Achilles’ heel. Like the coolest kid in school when he arrives at college only to find that these older kids don’t give a shit how popular you were in your hometown, Miller has spent the last two years playing major-league catch-up, reassessing the kind of rapper he wants to be. “I’m not here to be a teenybopper sensation,” he told me in Denver, bristling at nicknames like “the hip-hop Justin Bieber,” despite his contradictory pride that most of his material at the time dealt with decidedly teenage themes. He was 19 then. Now he’s 21, and a millionaire. He’s gonna need more than a few million YouTube views this time.

The phoenix narrative that has taken shape in the months leading up to today’s release of his sophomore LP, Watching Movies With the Sound Off, shouldn’t surprise anyone who’s met the kid — or anyone who’s watched even half an episode of the silly reality show MTV gave him and his Most Dope crew earlier this year (this, plus a cathartic mixtape and EP, lifted his spirits and obliged him to knock off the lean). Miller, who spent his entire adolescence hustling his way into the rap game, has the kind of charisma most often reserved for star quarterbacks and prom kings. Energetic, cocky, clever, goofy, and just short of totally self-absorbed, he gets his moxie from the adoration of others; the undying loyalty of his friends puts him on his game. To be Mac Miller, Malcolm McCormick needs to lead, and the clique of Pittsburgh dudes who abandoned various other life plans (college, careers) to trail behind their fearless leader from half-empty Pittsburgh clubs to bud-scented tour buses to the unnecessarily lavish Hollywood Hills are arguably the reason Mac Miller is anything at all. DJ Clockwork, merch-slingers Jimmy Murton and Brandon “Peanut” Herbert, videographer Ian Wolfson, hype-man TreeJay, bodyguard Big Dave, business partner/manager Quentin Cuff, various friends from high school who fly in from Pittsburgh or college from time to time — they’re a well-smoked-out machine whose unquestioning devotion both fueled Mac’s creative direction (basically anything that would make for a fun video shoot) and created an aura of acceptance around him that enticed new fans by the thousands, like Army pants and flip-flops. They’re his built-in family, his yes-men, his safety net, both emotionally and professionally, and their existence has determined, in large part, the blueprint of his career.

The disappointment that marred his success in 2011 sent him inward and outward at once. With his mixtape Macadelic expelling emotions from a broken relationship and his self-produced You EP getting his instrumental wiggles out, the only question left for a second album was “How does Mac Miller feel about himself?”

He and his team have framed Watching Movies as the definitive answer to that question, pulling out every stop to make sure its frills are as lush as its core. The way Mac rounds up friends for the record feels less like a guest-heavy insurance plan and more like a musical Most Dope; as other surprised critics have noted, the album’s collaborated buoy tracks (especially the Flying Lotus cut “S.D.S.,” the Earl Sweatshirt–featuring “I’m Not Real,” and the outstanding Jay Electronica collaboration “Suplexes Inside of Complexes and Duplexes”) provide legitimacy without overshadowing his own worth.

The record comes as a surprise only to those who didn’t take into account that, sometimes, teenagers grow up. Hip-hop heads who smirked at “Nikes on My Feet” and “Donald Trump” (fluffy teen pop-rap tracks that make Macklemore sound like Nas) did so understandably, but the total condemnation of Mac Miller as an artist mirrored the same misinterpretation that’s plagued Top-40 pop stars for decades: Because the music is simple, even childish, the person making it is equally simple, incapable of creating something more meaningful. Add the fact that the artist is a white teenager from a middle-class neighborhood and a stable family, and the “frat rap” moniker is practically tattooed to your forehead (even if you never went to college). The reasons Miller was condemned went deeper than “white friend of Wiz Khalifa,” of course; it’s not really the Kidz Bop stuff that rankled critics (as easy an explanation as that is). As is often the case in hip-hop hate, it was his straddling of two identities – suburban cool kid and lean-guzzling wannabe – that made him look a fool.

Luckily, however, low expectations are great working conditions. The album itself is iridescent, like an abalone shell (Mac’s obsession with a sea turtle motif is apt) or a holographic Pokémon card (maybe not a Charizard, but a solid Blastoise, sure). Tilt it one way, you get musings of a child of divorce and a product of a one-parent household (“The Star Room”). Turn it another, and its colors melt into struggles with identity and depression, an existential consideration of what it means to be fully present in the public eye (“I’m Not Real”). Inspired beats from Pharrell, Clams Casino, Tyler, The Creator, and Mac himself, among others, pad the subject matter with more depth and inspiration than any previous Mac Miller release: instead of casinos and delis, songs now exist in cavernous tunnels, orchestral concert halls, inside computerized dreamworlds. Lyrics like “I don’t act hard/I still read Babar” and “Watching Dawson’s Creek till I fall asleep” link Mac to his cartoonish past, while “Sorry for that blind people comment, that was just rude/And I was raised better, say God bless you, I’ve learned” lead him into a future characterized by both self-awareness and attention to detail. At its core, Watching Movies is his exploration of what would happen if the only person Mac Miller had to impress were Malcolm McCormick.

Angle it a different way, though, and you get lines like “Suck my dick before I slap you with it.” In the midst of a production-rich internal exploration of what it means to be an adult (and an artist, not a party-rapping super-senior), stale lines stick out like awkward elbows from time to time. While the finished Watching Movies product is an unquestionable step forward, the fact that Mac hasn’t yet made up his mind once and for all is distinct; he still hasn’t totally abandoned seeking validation from external sources. Those outlying moments (“dyke hoes,” “smacking groupies,” “wonder if Hindus like to eat fish soup,” “Spit the shit that leave a diaper brown, poo,” “where them titties at?”) give the Grown-Up Mac Miller Record a minor-yet-significant dose of What Mac Believes Grown-Up Mac Miller Ought To Be, which downgrades it from game changer to, simply, a do-over. They are potential ammunition for the critics he might still have that, if they intensify later on, could ultimately prove that what Mac brings to the table is the unnecessary, sloppy perspective of another reasonably privileged, posture-affecting white rapper. Those who’ve invested in him — Most Dope and Jay Electronica and FlyLo and Earl Sweatshirt and ScHoolboy Q and Pharrell Williams — know that’s not true, but Miller is trying to establish himself now, so time is somewhat of the essence. Besides, those lines don’t jibe with the rest of the album’s depth at all; when he does avoid the temptation of parroting club-rap, image-heavy tropes, and embraces unforced thoughts he’s turned over in his head more than once, he succeeds several times over, not only as a songwriter but as an earning member of a respected rap vanguard. Didn’t all those hours watching TV teach him anything about trying to be cool by being mean to the nerds (or in this case, women)? Was he “raised better” or wasn’t he? Has he “learned,” or hasn’t he?

When Loaded Lux repeats “Who the fuck is Mac Miller?” with Beat poet foreboding on “Red Dot Music,” he really is asking Mac and Mac alone, and he’ll ask as many times as necessary to drive the point home. It’s not a complicated — or ultimately important — question for anyone else.