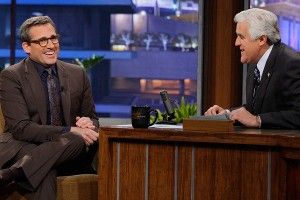 Are you a huge fan of sex panthers, and diapers full of Indian food, and tridents to the chest, and the breaking of the glass ceiling, and all the rest of the good stuff from Anchorman? Have you been waiting years for the sequel? Want to know everything you can about Anchorman: The Legend Continues? Well, you can’t. You can’t know everything. It’s just started shooting and, frankly, they’re not going to let all the details go just yet. It just doesn’t make sense, for the movie, to do that. I’m sorry. You gotta maintain the mystery.

But they will have Steve Carell go on Jay Leno and talk about the flick in the most general terms possible. The most important thing: “Nobody changes.” The second-most important thing: The movie is shooting in Atlanta, which means there’s like a 7 percent chance that in the next few months a photo of Carell, Will Ferrell, and Paul Rudd rolling deep with 2 Chainz and Young Jeezy at Magic City will pop up.