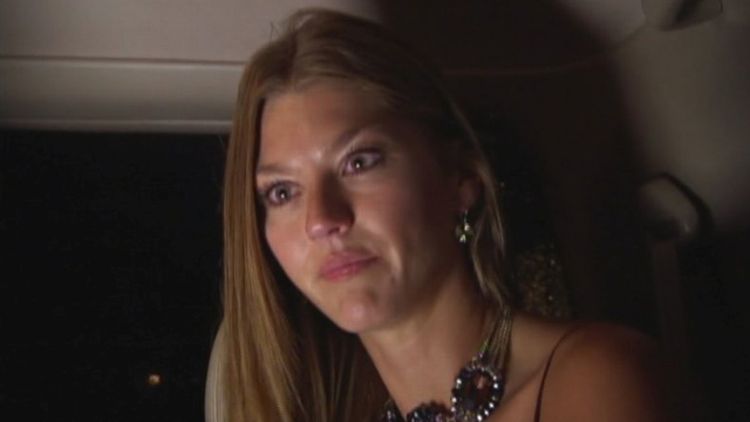 The fantasy suite on The Bachelor is a perplexing proposal for the ladies: On one hand they know that this night alone with The Bach is the make-or-break moment that can lead directly to accepting a ring on the engagement platform; on the other hand … they don’t want to look easy. The way that every contestant in the history of this program has decided to play it is to give the “I don’t normally do this” speech. Hearing or giving the “I don’t normally do this” speech is as much a part of single life as frozen pizza. This week, each woman delivered her own spin on the “I don’t normally do this” speech and ended up accepting the invitation of the Virgin Bachelor. Oh yeah, one more thing: I’m totally not buying this “virgin” bullshit that the tabloids are selling, I honestly think Sean is just so boring that the only story line that ABC flacks could conceive was to play up his boringocity to the point where it was front-page news.

After a quiet week, Grandma brought the thunder. I knew she would when she asked last Thursday, “What night is our program on?” Her Grandma Spidey-senses were onto AshLee since the very beginning; she doesn’t like AshLee as much as AshLee actually likes metaphors.

AshLee (The Bachelor, Simmons), 40 points: Dear AshLee: Dial it back a bit, jeez. On her date with Sean she made out with him four times (20 points), told him she wanted to marry him (10 points), and constructed at least four kajillion metaphors relating everyday activities to their “connection.” While I thought Sean was going to ultimately end up with AshLee because she was the most attractive woman left and, ya know, the other two have the intellectual capabilities of jellyfish, Grandma saw right through all that. This week’s GRTFL Top Five is the Top Five Grandma Quotes From AshLee’s Date, listed from “well, that wasn’t even worth writing down” to “I think Grandma should have a Vegas show where tourists come and watch her watch The Bachelor”:

5. “She looks scared.” Don’t worry, they get better, but was I the only person who took immense enjoyment in AshLee’s INSISTENCE that when she goes in the water she is accompanied by a “floatie”? She said the word “floatie,” like, four times. If I were producing this show, there’s no way I wouldn’t tell her there are no floaties allowed, just to watch her freak out.

4. “She doesn’t seem sincere.” When she said this, Grandma was VERY sincere.

3. “This one, I don’t like her. (Why?) I don’t know, because my spirit doesn’t take to her.” Grandma has this Jamaican thing where she will just look at someone and decide whether or not her “spirit takes to them.” It is completely arbitrary and at the same time 100 percent accurate.

2. [After AshLee describes the ring she wants Sean to give her] “HAHAHAHAHA, I don’t think you are going to get the ring, baby, WOOOOO WHOOOO WOOOOO!” I cannot express how happy she was telling AshLee that she wasn’t getting the ring or how dope the “woooooooo whooooooo wooooooo” part was. She is like a 91-year-old Ric Flair.

1. Sean says: “What I would love is to stay up with her all night talking.”

Alas, AshLee did not get the ring; she got escorted to the limo ride home. What AshLee did while Sean was trying to do his whole, “I’m a great guy, I do everything right, let me explain” thing was the most endearing thing she has done all season. She didn’t say a word, she didn’t cry, she didn’t let him explain, she didn’t get mad, she just stared at him. Stared at him with a face that said … well … her face didn’t say anything. She went straight cyborg and looked in his eyes and let him wallow in the fact that he just rebroke a broken woman. She saved her tears for the limo interview (2 x 5 = 10 points). I’m not sure if AshLee is going to be the next Bachelorette or the next great serial killer. Confession time: I never found her more attractive than when she was death-staring down Sean. Not sure what that says about her or me, but I’m also not sure I want to find out.

Catherine (The Bachelor, Simmons), 40 points: Does anyone have proof that Catherine has been on this show since the beginning? I swear she’s a midseason replacement and running away with the whole thing, that she’s the P.J. Carlesimo of bachelorettes. On her date with Sean they went on a boat ride and the producers made them do that “I’m the king of the world!” thing — why do people always do that on boats on reality shows? — and they made out a ton (5 x 4 = 20 points). One particular kiss on the Thai boat that they showed on camera really disgusted everyone I was watching with. He was just lapping at her like she was a bowl of milk and he was a thirsty tiger. While this “kiss” was happening there was a lightning storm brewing in the background, and Grandma offered her line of the night: “Too much! No wonder the thunder is crashing, it’s telling him, ‘NO NO NO!’” Right after that, Sean offered his line of the night:

Catherine: “I love you, Sean.”

If you’re reading this and you’re in a relationship, every time your significant other offers an “I love you,” just respond with “I love … hearing you say that.” You’re welcome.

Taylor (Real Housewives of Beverly Hills, House), 30 points: I was totally wrong. You know when you only have one side of the story and you’re convinced that your take on it is 100 percent correct? Well, I did that with Taylor last week when I talked about how she got slammered and forgot that she had children. She totally got slammered and it seemed like she forgot that she had children, but when Kyle and Kim came to give her the ol’ “You have a drinking problem” intervention (30 points) and they brought up the incident, Taylor responded quickly with, “Not knowing where Kennedy was was a miscommunication between my nanny, my mom, and me.” Right when she finished that sentence I said to myself, “Shit, that makes total fucking sense, what am I doing writing stuff on the Internet about someone’s parenting skills when I have no idea what I’m talking about? I should really tone it down.” (Don’t worry, five minutes later I was back to making fun of how her lips look like a catcher’s mitt. I have no morals.)

Shamar (Survivor, Kang), 25 points: “I am not going to be the angry black man on Survivor, I am not, I am just not.” Um, dude, you are totally the angry black man on Survivor. Shamar spent his time this episode arguing with everyone in his tribe (10 points). The weird part to me is that he is in the “fan” tribe that is supposed to consist solely of people obsessed with the show. If you watch Survivor, why would you go on the show and become “the hated guy”? “The hated guy” never wins. “The hated guy” gets kept around as a swing-vote pawn for two or three episodes and then gets bounced. He is so hated in his tribe that he threatened to leave the show (15 points) this week but stuck it out. I would spend another 500 words making fun of what a jerk Shamar is, but when you go to the military and serve our country in Iraq while I’m watching reality TV on my couch, you get a lifetime pass. Thank you for your service, Shamar.

Lindsay (The Bachelor, Simmons), 25 points: I don’t even want to talk about Lindsay. They went on a date in Thailand, fed some monkeys, made out (15 points), talked about getting married (10 points), and got rained on. Guess what? It rains a ton in Thailand. I went there on my honeymoon and came back with a full bottle of sunscreen. You know it was a rainy vacation when I read three books on it. I haven’t read three books in two weeks since I got hooked on The Hunger Games, #teamgale. I would bet a thousand dollars that they rescheduled the engagement platform scene at least twice because of weather.

Brandi (Real Housewives of Beverly Hills, Simmons), 6 points: Brandi did the thing she always does where she jokes about coitusing Ken (six times) on the Paris trip, but the real story was Kim Richards. Kim arrived a little later than the rest of the crew and was, well, acting, um … this is what her sister Kyle said to her when she saw her: “Why you make that face? Why ya? What? What was that? You’re scaring me.” Kim just sat there staring at everyone and creepy-smiling like one of the girls from Toddlers & Tiaras. I would have given her intoxication points but she didn’t seem drunk, she seemed … I don’t even know how to explain her behavior … she seemed like that Dick Tracy villain The Blank.

Oh yeah, the award for “The Most Real Housewives-y Quote of the Week” goes to Ken’s son Warren for this gem: “You don’t know where the guesthouse is, do you? It’s over there, behind the tennis courts.” If there were an award for “The Most Real Housewives-y Outfit of the Week,” he would have won that, too, for wearing an unbuttoned long-sleeved shirt with basketball shorts on a helipad. Yes, you read that right.

Dawn (Survivor, House), 5 points: Dawn cried and I nearly did when I realized that Brenda is likely going to be voted out in the next couple weeks. You already took Hope from me, DON’T TAKE BRENDA!

Reynold (Survivor, Lisanti), 5 points: Reynold got into a fight with Shamar this week because Shamar is … Oh wait, I almost forgot: Shamar, thank you for your service.

Check back next week for the return of Tierra on The Bach, more on The Blank on Real Housewives, and what could be our last chance to watch Brenda in her underwear on Survivor. What happened in my life that I got to a point where all this is important to me? Who cares?