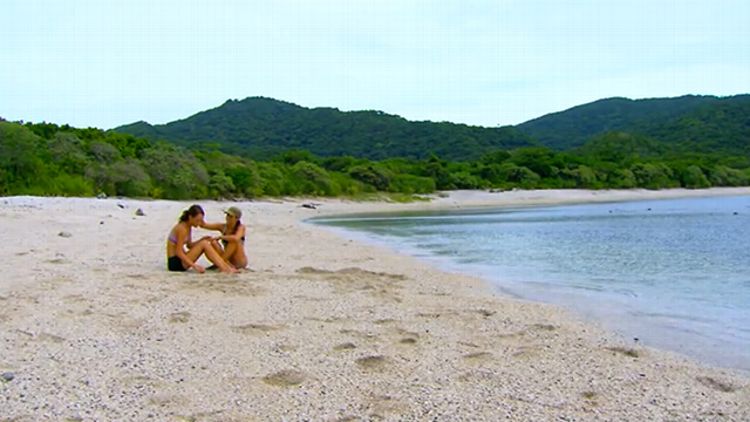 Actually, let me rephrase that: Cliff Robinson might be on Survivor next season. Friends of Grantland Trey Kerby and Leigh Ellis, of NBA TV’s The Starters (né The Basketball Jones), received word via tweet that Uncle Cliffy would be in Jeff Probst’s next human ant farm, so they launched a thorough investigation. An investigation that ended where all reality-TV investigations end: online message boards. The resourceful and dedicated folks at Survivor Sucks pieced together that Cliff Robinson would be on the show by cross-referencing social-media inactivity with Internet witchcraft. They are good at what they do. Oh yeah — in case you forgot which Cliff Robinson I’m talking about, it’s THIS CLIFF ROBINSON:

By digging a little deeper (read: Googling), I discovered that my old friends at Vevmo had a post about eight of the other cast members on the upcoming season, and was overjoyed to learn that Uncle Cliffy would be sharing a beach with this young man:

Cliff Robinson (maybe) being on Survivor is easily this week’s GRTFL Questionable Moment of the Week:

Will he wear his buff as a headband? Will anyone recognize him? He’s 6-foot-10; will he admit that he was a professional basketball player? Will he wear his uniform the whole time? Will his strategy be to come out, reveal who he is, and say that he should go to the finals because no one will vote to give a millionaire another million dollars? Why didn’t that strategy work for Jimmy Johnson? Will Cliff Robinson somehow find weed on the island? What will the Springfield Armor do without him? How will this affect his role of coming off the bench for Dennis Rodman’s globetrotting PBAA team? So many questions …

OK, before we get too excited about Uncle Cliffy and the above crotch-grabbing Kanyito going to tribal council next season, let’s talk about the current season, which turned in an excellent episode this week. On to the scores:

Mark Burnett and Jeff Probst finally got what they wanted out of this season: a loved one casting a vote against a loved one. It was well executed, well edited, teary (5 x 3 = 15 points), emotional (OK, kind of emotional), and satisfying even though we all saw it coming. Let’s start from the beginning.

Ciera is Laura M’s daughter. Ciera got pregnant at 17 (a fact I butchered in this week’s Right Reasons podcast — sorry, ladies), which is not an easy way to transition into adulthood. Ciera and Laura are certainly close, and earlier in the season, Ciera hinted that her teenage pregnancy brought shame to her mother. Coming into the game, it seemed that guilt, responsibility, and shame had cemented Laura’s role as the all-knowing mother with the answers and Ciera’s as the ne’er-do-well daughter following instructions. That began to change on Survivor:

Ciera: “Since I have been playing with my mom, one of the things I’ve noticed is a role reversal, especially one I never thought coming into this game would happen. I thought, Listen to my mom, I will do what my mom says. But I think I’ve proven to be the better player. I mean, I have. I’ve had to go to way more tribal councils and I’m still here; she goes to her first one and she’s voted out.”

What is this? The ne’er-do-well daughter is starting to question not only her mother’s authority, but also her mother’s ability? Take a step back and think about what you’re watching. Granted, it’s all in the context of a game show in which everyone runs around a beach in his or her skivvies munching on coconuts, but you’re still witnessing a daughter realize that her mother is out of touch and out of favor. You’re watching Iverson cross over Jordan. Only in this case, Iverson didn’t just cross over Jordan; he voted him out of the NBA (20 points).

Ciera (crying): “I don’t want to have to vote my mom out. I came into this wanting to stick with my mom until the end, but [wipes tear] … It just so happens that it isn’t practical, and I get one shot at this, one shot, and I don’t want to mess it up.”

OK, please allow me to backtrack a bit on what I wrote above. This was all well executed, well edited, and teary, but something didn’t feel right. In fact, I think it might all have been bullshit. Let me walk you through it.

On Survivor, one of the toughest situations the producers face is baking drama into Tribal Council when one person is clearly getting voted out. In that case, they set up a potential dark horse who looks poised to get voted out at the last minute. Anyone who watches this show knows exactly what I’m talking about. They also have Jeffy P steer the Tribal Council in a way that further builds the perceived dark horse’s potential to be voted out. Then, when Jeffy P reads the votes, he reads the one vote for the dark horse first or second to make it seem like it might happen. But it never does.

I don’t think this whole teary mother-daughter backstab thing was anything like what we saw in this edit. My theory is that everyone on the beach knew that Laura was going to Redemption, including Laura, and that Laura and Ciera had even talked about it and decided that it was best. Why do I think that? Allow me to present four pieces of evidence:

Exhibit A: When Ciera made a last-ditch attempt to sway the vote toward Katie by claiming that she knew Katie didn’t have the Idol, she seemed to be half-kidding and clearly wasn’t gaining any traction with the group. What kind of fool is going to fall for the “Nahforeal, I told her I had the Idol and she believed it so she can’t have the Idol” logic? Did it ever cross Ciera’s mind that if she had the Idol, she may have behaved in the exact same way? No, no it did not.

Exhibit B: The only person who even mentioned possibly voting for Katie was Caleb, when he said, “Katie is not someone that you want to be standing next to in the final.” First of all, that’s the only thing Caleb has said in six episodes. Second, maybe he only said it because she smells.

Exhibit D: CIERA WROTE “(MOM)” NEXT TO HER MOM’S NAME ON THE VOTE CARD. Clearly she wasn’t trying to hide her allegiance.

Regardless, it was still fun to watch Ciera and Laura hug and cry and pretend this was all more emotional and dramatic than it was. I’m now full-on rooting for Laura to come back from Redemption Island just so she can be voted off the show for a third time.

The fabricated drama at Tribal wasn’t the only fun part of this episode. We saw golden boy Aras lose to his former junkie brother in the Redemption Challenge, and we saw Monica win an endurance Immunity/Reward Challenge, start crying (5 points), and then give away the reward. And not just any reward: a cheeseburgers, hot dogs, and soda reward. This was my favorite part of the show, and it’s going to be this week’s GRTFL Top Five. This week’s GRTFL Top Five is my Top Five Favorite Things That Happened During This Challenge, listed from “Yeah, that was kind of cool” to “I need a GIF of that so it stays with me forever.”

5. My strategic idea: Yes, my own idea was one of my favorite things about this challenge; I realize what that says about me, and I’m fine with it. The challenge was to stand on a dock and hold on to a rope, which became increasingly difficult as the cast members were forced to grab the rope by a lower and lower knot. What I’d do in this scenario is get down to the top four people, then announce: “I feel great, I’m going to win this. I can tell. And you know from watching this show that I’m going to be able to share those delicious burgers with whomever I choose. I’m going to choose to share those burgers with the first person who drops into the water of us four. If I can bring someone else with me, it’ll be the second person to drop in the water. And if I can bring a third, it sure as hell won’t be the person who didn’t drop in the water and tried to beat me. So ask yourself right now, ‘Do I want to risk not eating those delicious burgers for a one-in-four chance at winning?’” Then I’d punctuate the proposal by dropping down to one hand and making a gesture to show how comfortable I felt holding the rope even if doing so almost made me drop in. I’d only have to feign confidence for 10 or so seconds before they all started splashing anyway. Please explain to me why that wouldn’t work.

4. Hayden’s pectoral muscles: Hayden starts the challenge, and his muscles can barely stay under his skin. He’s so ripped, he looks like he’s posing for a cologne ad. Then he screams and falls into the water. First. Almost immediately.

3. The moment Jeffy P let Monica change the rules: When Monica suggested that she give all the food to the rest of her tribe and abstain from eating any, I wondered to myself, Does Jeffy P even have the authority to make that call? Is he going to let the cast dictate the rules of the game? Will he deny Monica as a power play? Then he let her do what she wanted because Jeffy P is both host and EP of the show. He’s a chill type of fella. Kudos, Jeffy P.

2. Someone on Survivor finally ate like I would if I were ever on Survivor:

1. My wife’s response to Monica’s kind gesture: “Of course Monica gave all the food away, that skinny bitch wasn’t going to eat it.”

The only better line came from the editor of this column, Mallory Rubin: “Brad would have told her to throw it in the fire.”

No column next week, which means we are, like, two columns away from The Bachelor. Grandma and I are ready.