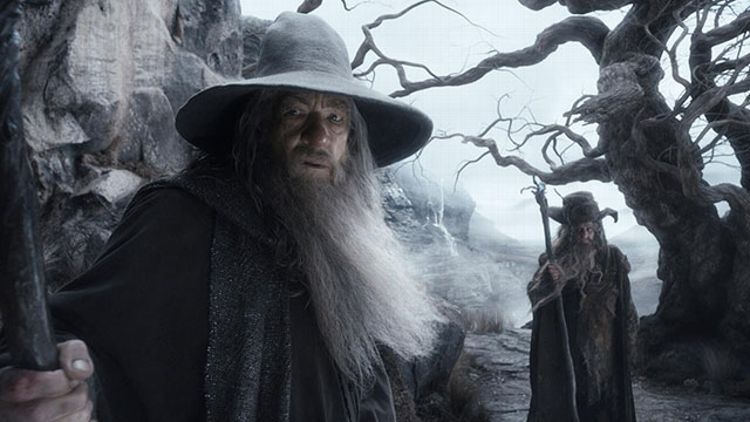 Bilbo Smaug’d up the competition for a second weekend in a row, dropping 57 percent from last week’s debut and moving the latest Hobbit’s needle to $403.8 million internationally. On not a historically great moviegoing weekend (buy a 3-D ticket and some popcorn or finally get some presents for EVERYONE YOU LOVE?), ticket sales were actually up 37 percent from last year. So, as Box Office Mojo writes, “unless all five Christmas Day releases bomb, the 2013 box office is now guaranteed to top last year’s $10.84 billion record.” Yeah, don’t forget, there are five Christmas Day releases — The Wolf of Wall Street, The Secret Life of Walter Mitty, 47 Ronin, Grudge Match, Justin Bieber’s Believe — en route, in addition to this competition. Get ready to experience Netflix-like levels of indecision about what to watch.

“Adam McKay Hangs Head, Says, With the Air of Someone Announcing a Christmasless December, That Anchorman 2 Never Shall Be.” Remember how many of those headlines you encountered in the years after you learned that milk was a bad choice? Anchorman 2 was a comedy unicorn, elusive until the moment Ron Burgundy visited Conan for a spot of jazz flute and shouted that the glass case of emotion would be reopened for business, nearly a full decade after the first time. So how did the sequel do $2 million less than the original? Maybe Will Ferrell is over, bro; maybe it’s just that Anchorman 2 opened to a five-day weekend tallying closer to $40 million (and reducing some of the gotta-see-it factor by the time the weekend proper rolled around); maybe, probably, every person in America felt like they’d already seen this movie thanks to the Dodge Durango ads and the 750 other places Ron stuck his nose into.

It looks like double features of Frozen and American Hustle were huge with families this weekend. Unless I’m mistaken and the exact same amount of people just went to see both. Could be either.

The Scorsese comparisons have been flying; we’ll see how that conversation goes once Scorsese drops his latest on Christmas Day. To remove Marty from the frame for a moment, though: This is the best box-office weekend that writer/director David O. Russell has ever had. Eleven months ago, Silver Linings Playbook jumped to wide release after five weeks playing in 370ish theaters and three weeks playing in about 800 theaters and “debuted” to $10 million. The Fighter, which had easily accessible source material — boxing movie! Brothers! — only debuted to $12.1 million in 2010. 1999’s Three Kings, which had George Clooney and Mark Wahlberg and played in 440 more theaters than American Hustle is currently playing in, debuted to $15.8 million. So you’re doing something right, Dave! Even if it’s just assembling shiny casts that people absolutely have to come out and see. Or even if it’s just making Jennifer Lawrence movies.

“That’s worse than Charlie Wilson’s War ($9.7 million), which opened on the same weekend in 2007 and also had Tom Hanks portraying a historical figure,” Box Office Mojo writes, giving us all a rare opportunity to consider the eminently forgettable film that was Charlie Wilson’s War.