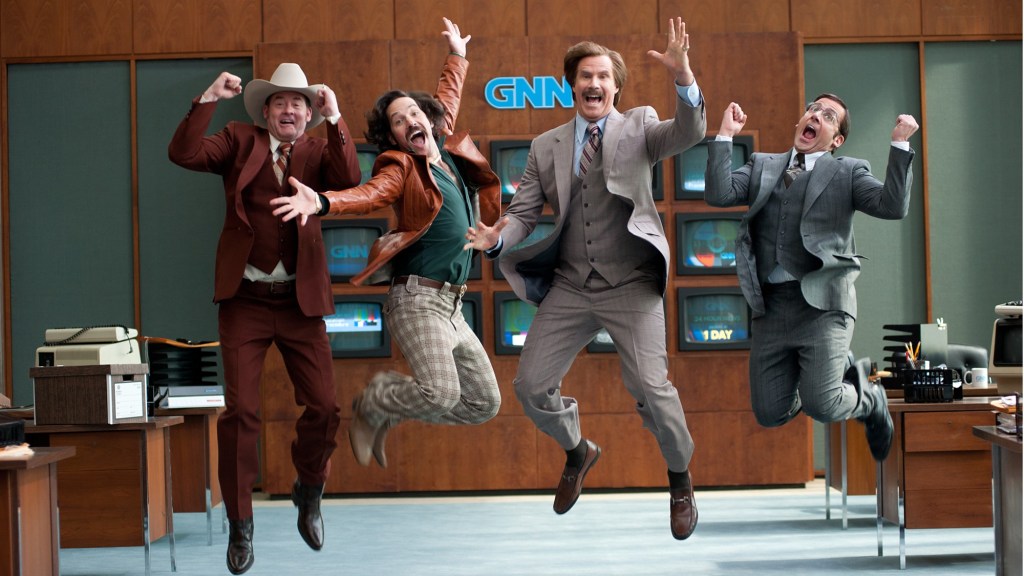 By the end of that 40-year campaign trail, it felt like Anchorman 2 had coursed all the way through our veins before it even premiered. Then $169.3 million worth of folks saw it anyway, and now Paramount is reaching for the Triple Bold Semi–George Lucas Style sauce and rereleasing the movie, even as its original cut continues playing at a few derelict ’plexes across America.

The R-rated remix to Anch-nition will play in about 1,000 theaters for one week starting Friday, February 28. It’s 20 minutes longer than the version Wesley Morris said was “so determined to tell new [Ron] Burgundy jokes that they didn’t appear to care what they were about or whether they were any good.” Will Ferrell hit The Tonight Show Starring Jimmy Fallon on Thursday to announce this “Hey, my movie’s coming to DVD and VOD soon!” experiment. The scene they used to promote A-M 2.5: RoboAnchorman was a familiar trend piece about smoking crack cocaine, only re-jokified:

“[Director Adam McKay] did alternate takes and originally the movie was four hours long,” Ferrell told Fallon. “We played around with the idea of splitting it in two movies, but that didn’t really work. So we just had a second editor working the whole time with alternative jokes.” McKay’s version of events, to the New York Times: “We started talking and realized, we can replace every single joke in the movie with another joke.” A few jokes stuck around “for continuity,” but about 95 percent wound up being new. The Times says the rerelease isn’t a cash grab and rightly predicts the box office total will rise “only slightly.”

Now we set loose our questions about this unprecedented, unrequested event:

• Are there honestly 763 new jokes, as a press release, a trailer, and a Ferrell insist? Or is that some old-fashioned number humor?

• Adam McKay’s final three statements in the Times: He doesn’t think this version’s better than the original; he calls it “a stitched up, Frankenstein version” and says “you’ll either love it or hate it”; and he gives you permission to leave the theater at literally any time for a restroom break. I feel like there’s a coded message barely eluding me here …

• Will this punch line overhaul function more smoothly than the plot overhaul McKay and his team did of the original Anchorman, resulting in the film known on the mean streets of Wikipedia as Wake Up, Ron Burgundy? I can’t accurately speak to the funniness of that one, but I promise you I clearly remember what an unsettling experience it was to watch, even having gone years without seeing Anchorman. These movies aren’t just about how hard you laugh and how many times you do it — although they are about that. A big part of the draw is how foolishly quotable the jokes are in the first place, the “I’m kind of a big deal”s and “I love lamp”s you mumble a decade later as a weird, guaranteed way to connect to a group of similarly aged strangers.

• Lastly, most pressingly: This is actually nothing more than a bid to retroactively get Ferrell nominated for an Oscar, right? Because he has to win one eventually, and he has to win for Ron Burgundy, a man whose legend has been thoroughly accounted for onscreen at this point.