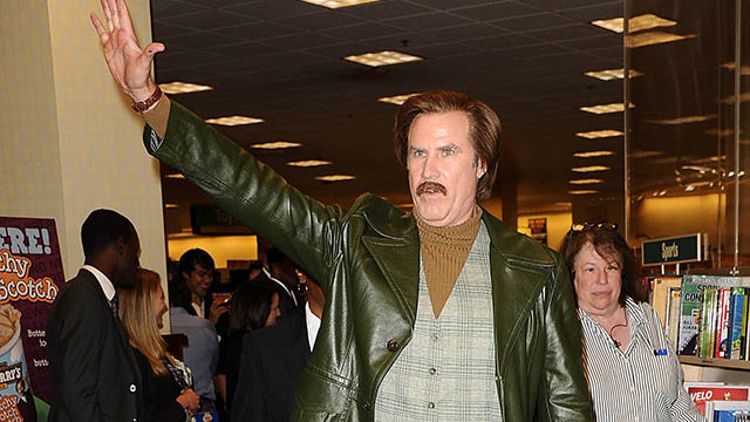 A regional inevitability in Los Angeles is finding yourself at The Grove. Maybe you need something that is only available at one of The Grove’s many shops, or you’re starving and brain-blocked and are enticed by the options of the farmers market, or your friend bullies you into it. You can try to avoid it, but like death, it will come for you and trap you in its maze of parking structures and glass elevators. The Grove is an outdoor mall, but it’s a very strange outdoor mall: There is a trolley (“built on an historic undercarriage from a 1950s Boston street car”), a fountain that spurts in time to Lionel Richie or Harry Connick Jr. tracks, and seasonal snow. It’s insanely clean for being constantly packed with people, and though the (early-aughts Art Deco–style) buildings and enormous Christmas tree are real in that they aren’t Tupac holograms, there’s something unsettlingly fake about the place. It’s a shopping theme park, but unlike Stew Leonard’s, for instance, it insists on being perceived as classy. If you’re feeling cynical, you might think that its class is sort of like Ron Burgundy’s, hopelessly unaware of its position on the classy ladder. In that way, The Grove’s Barnes & Noble is the perfect place for Anchorman’s Burgundy to sign copies of his autobiography, Let Me Off at the Top!: My Classy Life and Other Musings.

The Grove’s bookseller actually has hosted a pretty formidable list of guests this month, including Mike Tyson, Demi Lovato, and Vince Gilligan (with Bryan Cranston, Dean Norris, and Bob Odenkirk), with Stevie Nicks scheduled to sign copies of her DVD documentary on December 4. But something about a fictional character such as Burgundy signing copies of his own fake autobiography in this setting made a lot of sense. Look at the photos: Will Ferrell was a wax statue in polyester and leather promoting his sequel, Anchorman 2: The Legend Continues, from behind the armor of his ’70s mustache. Outside, a trolley would be circling the premises on its three-quarters-mile track.

Ferrell once said that Burgundy was his “favorite character [he’s] played … The most satisfying thing [he’s] ever done.” Anchorman cowriters Adam McKay (who also directed) and Ferrell fought Paramount to back the sequel, and in advance of its December 20 release date, they’re working hard to ensure its success. On Sunday, the Winnipeg Sun announced that the suave fictional broadcaster would be providing his “unique perspective” on the Canadian Olympic Curling Trials. Why this seems on-brand for Burgundy, I’m not sure, but it does.

Last month, he tried to sell you a Dodge. A few weeks later, he offered you some (butter)scotch-flavored Ben & Jerry’s called “Scotchy Scotch Scotch” (you’ll have to wait for “cheap white wine sherbet”). There was a museum exhibit, a song for Rob Ford, a tribute from Emerson College, and a bicycle ride with Daft Punk. Ron Burgundy is the hardest-working imaginary person to have ever lived. His commercial, writing, and broadcasting careers are better than most living human actors, authors, and anchors expect from their professions.

Adweek recently praised Anchorman 2’s marketing campaign, which includes Tumblr and CNN partnerships, a Burgundy-penned Huffington Post column, and a casting call, implying that it’s part of an early wave of longer-narrative advertising that might extend beyond movies into products. But Anchorman is unique because the people behind it seem so invested in its silliness. There is more Anchorman (and Anchorman 2) than anyone really knows what to do with. Its makers are passionate about it, so much so that its stars offered to take pay cuts to get it made. That’s un-fakeable.

The ongoing Burgundy buzz is a lot of activity to sustain until the release date, both for Ferrell and the film’s prospective audience, but it’s boosted by the fact that the full realization of Ron Burgundy apparently has some smart minds behind it who understand the importance of making the cartoonish jazz flutist and charming buffoon as real as possible. It’s working — you bought the Durangos, after all — and, even if you’re not the kind of person who would buy a $50 Anchorman 2 superticket, the push has been interesting on a vague, performance-art level. What has it been like to be Ferrell as Burgundy, working the talk show circuit and spending so much time wearing fur-collared jackets and vintage hair products — and being so good at it?

The Grove’s Christmas tree is the largest in Los Angeles. When I last found myself there, I touched it and thought it was plastic. I visited The Grove just after the official tree-lighting ceremony on November 17, which featured CeeLo Green, Mary J. Blige, and Toni Braxton. If you want, you can see what The Grove looks like right now, either for practical purposes or just to make sure it’s still in character. It always is. It wants you to buy it and everything it has that’s for sale, and it’s always thinking of new ways to appeal to you. The more you reject it, the smarter it gets: The fountain dances with or without you, knowing that, if you happen to be at Crate and Barrel on a Tuesday afternoon, you might pause to pitch a penny, infected by whimsy. Malls and advertising strategies often lack imagination, but Burgundy’s full-court press relies on fandom fantasy and the hard work required to make it realistic, almost tangible. The anchor probably qualifies for his own SAG health care, and he has smoldered through enough TV spots to make you question his (and Ferrell’s) sense of irony. It’s like a game of chicken: When do you finally succumb to the majesty of a very tall pine or actor’s commitment? Forget it, Jake. It’s Pleasure Town.