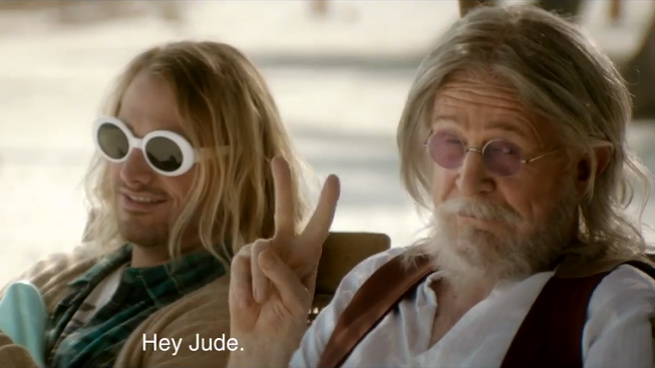 Apparently, the living and the deceased have different opinions when it comes to citrus beer. Or no, wait, let me clarify: Beer drinkers who don’t live on the island where celebrities flee after they’ve faked their own deaths find Dutch-brewed Bavaria Radler to be a mix of “big fake lemon, some wort” and “Country Time lemonade,” with notes of “candy [and] bubble gum.” But on Dead Star Island? That shit is poppin’ off.

Here is the premise of this spot, as described by the brewer’s YouTube account and translated by Google: “We all know the stories and theories surrounding the death of certain stars. But what’s the real story? This Bavaria Radler commercial makes it clear once and for all.” Marilyn Monroe, Tupac, Elvis, John Lennon, Kurt Cobain, and Bruce Lee are all alive and hanging out together on a micro-set from Temptation Island; they have aged gently, probably because Monroe spends her days rubbing suntan lotion onto them while squinting at the tropical sun. They are served their oat-based lemonades by a young, tan waitress wearing a sarong and a tangerine bikini top. Marilyn’s skirt flips up in the breeze, and Bruce Lee gawks while Cobain barely restrains himself from vomiting. A cruise ship approaches, Lee rings a bell, and all the stars pitch in to collapse their makeshift bar and hide behind trees, so nobody will know they are still alive.

It kind of makes you want a drink, though not this drink. Why?

1. Remember when Converse marketed the Cobain sneaker? And that seemed a little tacky, given that Cobain was not super-duper into commercialism? (And what about when real footage of John Lennon was used in a Citroën commercial, and people got all bent out of shape about it?) OK, now multiply that tackiness by five million percent. Some poor actor is playing the late Cobain, shaking his head at another poor actor playing the late Lennon, who is summoning the beer mistress (“Hey, Jude!”) with a peace sign inverted into dual swizzle sticks to order another round. When can we expect the rain of barf from heaven? Does it take a long time to reach our atmosphere here on earth, and will it happen only in the Netherlands?

2. Elvis, who would be 79, now looks as though he sells real estate in Sarasota and is seen inflating a beach toy with his foot. Imagine that you are the King — resting peacefully, vacationing in Ottawa, and meditating on the impact of your musical legacy — and you see yourself looking like a time-share entrepreneur working a foot pedal. You reach for the phone to call your lawyer and your hand goes right through it. The only thing you can touch is LEMON BEER.

3. Lennon has an American accent. Obviously, the stars’ bodies have been snatched by island thetans and their brains rendered into messy scrambles of Verhoeven movies and and Gouda.

5. They used the disco version of “Sunny.”

6. Radler means “cyclist.” This is a sports beer. A sports beer flavored with lemon or grapefruit, with the weakest possible muscle for getting you drunk. So you’re stuck on an island, full of suds, but never able to get sloshed, speaking with a foreign accent, and older and crinklier than when you supposedly expired. Your only sustenance is wort and citrus powder. You live in fear of being discovered by een schip. Instead of selling Bavaria Radler, this is a tourism brochure for hell.

Cloud Nothings and the Deathless Song of the Summer Debate