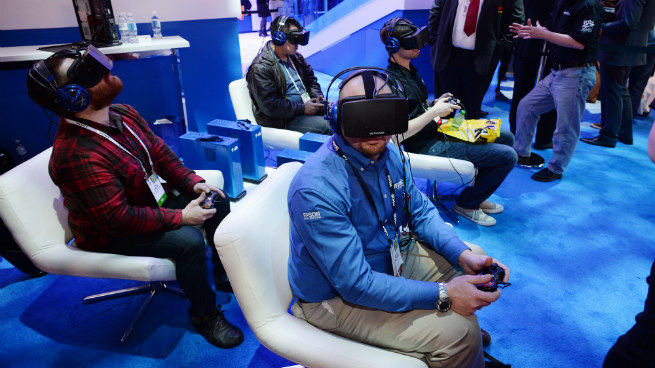 In a surprise announcement yesterday, Facebook revealed it had purchased virtual reality technology company Oculus VR, Inc. for a cool two billion dollars. You know what’s cooler than two billion dollars? A photo-realistic virtual reality environment headset, apparently. Aside from a viral plot to stoke the box office for this weekend’s horror movie release Oculus, some people are scratching their heads as to why Facebook wants to get into the head-mounted display industry. Is it an arms race with frequent rival Google, whose Google Glass technology enables a different kind of augmented reality? Probably. Does it look any less dumb on a human than Google Glass does? No, but it looks dumb in a different way. The Oculus headset is called Oculus Rift and was developed with a $91 million investment, a small portion of which was raised through Kickstarter. While prototypes have been displayed and developer kits promised to those who pledged money, the consumer version has yet to hit the market. Oculus showed the latest prototype nicknamed “Crystal Cove” in January at the annual Consumer Electronics Show in Las Vegas.

What Facebook plans to do with the Oculus Rift is up for debate. The technology was developed for immersive video gaming, and gamers have always been the intended audience. Perhaps Facebook plans to integrate the head-mounted display with social networking somehow, so you can fly over virtually simulated fields of acquaintances, walk around your crops in FarmVille, and stalk people from even more deeply inside the grid. Historically, the main problem with virtual reality headsets has been motion sickness, although forgetting you have a heavy thing on your head comes in at a close second. In 1995, Nintendo launched the virtual reality headset known as Virtual Boy, which ended up being a huge failure. The Virtual Boy promised entry into an immersive virtual reality universe, but used low-cost red LEDs rather than a pricy full-color display. The monochrome red LED display lacked head-tracking, so it was more like playing a regular 2-D video game in 3-D than a full-fledged 3-D immersive experience. It also tended to give users terrible headaches from eye strain if they played for too long (i.e., more than a few minutes).

Virtual Boy came out nearly 20 years ago, and in the years since, the technology for semi-affordable virtual reality headsets has advanced considerably. But do people still want them? Or was it just another cyberpunk fantasy? Games have since incorporated much better 3-D, but the idea of wearing a headset seems to have fallen out of favor. Can Mark Zuckerberg bring it back and prove that it’s more than just a novelty item? Maybe not. Markus “Notch” Persson, the designer of the wildly popular game Minecraft, stated on Twitter, “We were in talks about maybe bringing a version of Minecraft to Oculus. I just cancelled that deal. Facebook creeps me out.”

Zuckerberg says Facebook will develop Oculus primarily for gaming, but not only for it. “After games, we’re going to make Oculus a platform for many other experiences,” he wrote in the announcement. “Imagine enjoying a court side seat at a game, studying in a classroom of students and teachers all over the world or consulting with a doctor face-to-face — just by putting on goggles in your home.” I can imagine it, I’m just not sure I want to. It’s too much like an episode of Black Mirror. Will augmented reality devices become commonplace or will this be another Virtual Boy fiasco? Will it be like that 1994 episode of Mad About You in which Paul Reiser’s character uses a very Oculus Rift–like VR headset to enter a world in which he gets to apply sunscreen to Christie Brinkley in a bikini? Or will it be like the nightmarish VR world of 1992’s The Lawnmower Man? The dream of the ’90s is alive at Facebook.