‘Justified’ Recap: Fire in ‘The Toll’ 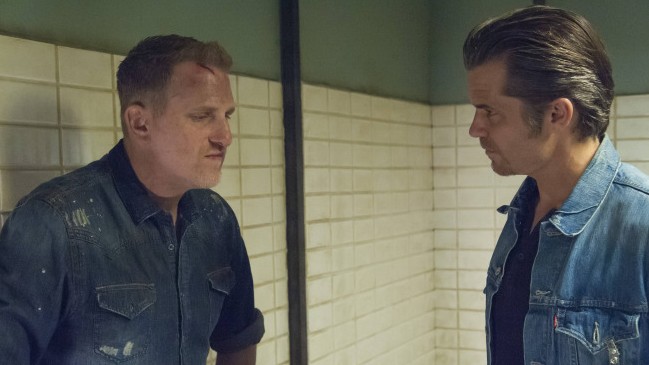 Previously, on Justified: Boyd tried his colleagues’ patience; Danny killed himself instead of Raylan; Wendy demonstrated just how difficult it is to break a bottle over someone’s head; Ava stabbed Judith with great gusto; Art offered to protect Allison for some reason; Danny asked Kendal “You a Crowe?” and we all got real nervous contemplating what, exactly, that might mean.

Tonight: We find out just how much good reason we had to worry over Art and Kendal, and Boyd gets back to his roots. That’s not a hair allusion. We’re as surprised as you are.

So when Art told Raylan he’d take care of Allison himself, he meant himself himself. We were on the side of Allison, Art, and the Marshals Service in general in believing Allison was in no danger, but the shootout scene is well-choreographed. And if you were mad at the promos for spoiling the shooting a week early, they at least get to it in a hurry. (Anybody go frame by frame through the hallway? The shooter looks way more like Daryl than Kendal, but is obscured enough to leave open the possibility that it’s somebody else entirely.)

And the way the rest of the episode plays out makes up for a setup on the inciting incident that feels just a little bit flimsy. There could’ve been a more robust reason to put Art in the line of fire, but his injury leads to so many moments overflowing with great character work that by the end of the hour we found ourselves not worrying too much about how we got there. Seeing the inside of Picker’s lungs will have that effect, apparently?

Look how far into this we have gotten without discussing the possibility that Art might die! We cannot think about this too much. It is too upsetting to contemplate. But it sortakinda, throughout the episode, looks like this might be the one thing that can break through Raylan’s impenetrable sulk-shield. He looks wrung out in the quiet car with Art’s wife, wrung out in the way that Ava’s looked for a couple of weeks now. And Leslie’s doing some wringing of her own, pinning Raylan like a butterfly in a shadow box with barely any inflection in her voice at all. Real-life Nick Searcy spouse Leslie Riley turns in a short but very effective performance this week, from her sobering assessment of Raylan’s choices to her walk through the halls of the hospital, where she wears the face of a woman who’s spent a lifetime worrying for her man’s safety. (To say nothing of her making Raylan at least look, for a minute, like he feels like he’s in the wrong with Art, which has to be a new and uncomfortable sensation for him.)

It takes the REARRANGING OF ART’S INNARDS to get Raylan, Tim, and Rachel some significant scene work together this season, apparently, but their easy rapport remains blissfully intact, and everybody plays true to their arcs so far this season: Rachel is the one with common sense; Tim is high-strung with intensity but well-controlled; Raylan is a broody pissant, for whom Chief Ed’s label of  “problem child” is the perfect, perfect term. “What the hell’s that supposed to mean?”asks Raylan. Like, Raylan, have you met you?

Where this episode really sings is bringing characters together in long-missed or unfamiliar pairings and watching them work in so many combinations: Raylan, Tim, and Rachel. Ed and Picker. Art and Allison. And the bubbling chemistry between Katherine (not a psychic!) and Vasquez, so grounded in a backstory we’ve never seen but are already convinced of, and so full of sinister promise for next year.

And when those characters are onscreen, it doesn’t feel like there’s a single wasted frame. All this is done in the service of plot enhancement and/or laying groundwork for the series’ final season, and but for the rickety circumstances that put Art in Allison’s hallway in the first place, it all feels earned. Kendal, wound up into a time bomb all season long, is set off in unexpected fashion. (Kendal does seem like a true Crowe at last, treating Wendy like a mom only when it’s for sympathetic effect.) Rachel is elevated to Art’s desk, doubtless capable but looking, in that first moment, like she can feel every bit of the years of experience separating her and her boss. Daryl comes back around on the Big Bad carousel. And Raylan’s on an interesting trail, wielding both a theory that seems like the most logical explanation for the Crowe boys’ hit gone wrong, and a plan of action to deal with it that we can’t see coming. 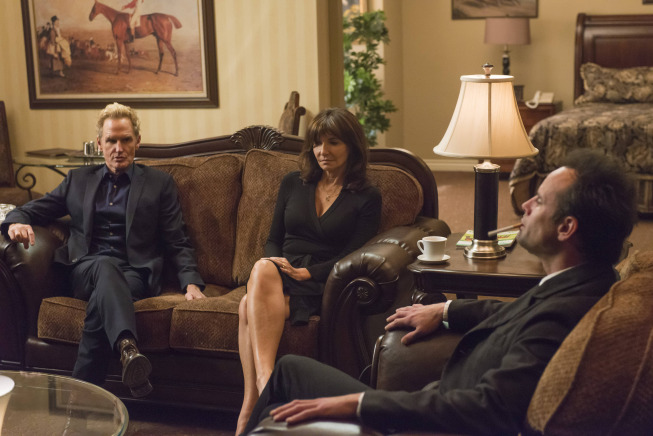 Raylan, Boyd, and Ava have all inhabited increasingly erratic orbits this season, and this week it feels like both male leads hit the wall she’s been smashed against for a couple of episodes now. Boyd just looks abandoned after his non-event chat with Officer Half-Pint, and right as we’re thinking we’ve never felt sorrier for him or Ava in the entire course of the series, he … bows up? Reboots? Gets in touch with his roots? It feels slightly tacky to credit blowing someone in half on a hotel loveseat for rejuvenating another man’s life, but watching Boyd crow over his prowess with Semtex is pure Season 1 brimstone glee, and after everything that’s gone on with Art and Kendal, it’s a gut-busting (SORRY) moment the audience needs, too. What really tickles us is that Boyd had to set it up twice, and it still worked. Timing, for once this season, was on his side. Congratulations are also in order to Boyd’s cigarette pack, joining the knockoff Furby in that great Justified pantheon of Chekhovian objects.

AVA: In the absolute upset of the week, by an even bigger margin than Boyd vs. Mikey, Ava and Penny’s atrocious poker faces don’t get them killed outright. All hail the Ice Cream Queen.

ALLISON: One callback, amid all the returning relationships, we didn’t see this week: Rachel’s initial and repeated misgivings regarding Allison. Is it time to give up on thinking Allison has some sinister part to play in the season’s remaining two episodes? Will Chief Ed’s gentle emphasis on Allison “seeming” like a nice young lady come back to haunt the show? When will the watching of too much True Detective wear off?

WENDY: Has Kendal’s implication in the attack on a federal agent turned her against Daryl, or is she in on it?

Picker. You might have noticed. Also Wynn’s security deposit.

A shock of maize past harvest time. Fluffy, even, in the pivotal hotel scene. What doth that sheep’s coat conceal? A WOLF STRAPPED WITH EXPLOSIVES, PERHAPS?

1. “If I were to admit to hitting him, could you call it child abuse and take custody of him?” (God, do we love Art.)

2. “The one where we catch up with Daryl out in the wild world.”

3. “Course, both my grandmas look like Edward James Olmos.”

4. “Of course, that was some time ago, and you’ve changed your hair.”

6. “You want a cigarette, Mr. Picker? You seem awful nervous.”

8. “Thirty years after Drew Thompson did that, he was still mad enough to drop bodies about it.”

9. “If you’re that worried about walking out, why even walk in?”

Who was the Crowes’ target? What’s Daryl’s endgame? How secure is Ava’s position? How reparable is Boyd and Ava’s relationship? Is it us, or is Vasquez legitimately apprehensive around Katherine? What do Ruiz and Yoon do now? Where’s Dewey? Does Theo Tonin have any knowledge of Raylan’s involvement with the Augustine murder? How much does Chief Ed know? Isn’t life funny, with Boyd removing a guy who could implicate Raylan at that scene from the board? Does it seriously not occur to everybody else, immediately, that Kendal is being coached? Isn’t it funny how Raylan can be more open with his feelings re: Art with Daryl than anybody else? Are Tim and Raylan going to be loosed on Daryl, or is the outstanding chemistry between Jacob Pitts and Tim Olyphant going to go to waste because Raylan’s busy feeling sorry for his SUPER ROMANTIC MANSOME LONER RAWR self? Doesn’t post-fight Daryl look like Radagast in this episode? Don’t you wish he had a pet rabbit?