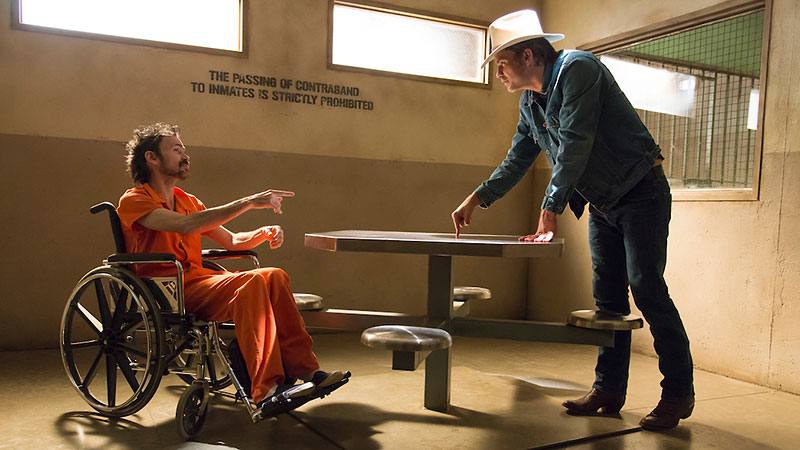 Previously on Justified: Raylan dropped any pretense of being on vacation to dig into just what, exactly, was going on down Mexico way; Ava sent Boyd on a murderous errand and was set a seemingly impossible task; Daryl got overt with Boyd and more overt with Wendy about his big dreams of Kentucky kingpinhood; the whole gang met up at Audrey’s for some tense study on King Lear; Dewey fought Danny and a DEA agent using a tow truck as a blunt weapon; and, against all odds, one whole truck of heroin actually made it to Harlan!

This week: The Crowes drive the story engine, with Raylan and Boyd and Ava’s tribulations interspersed throughout; some crucial dropped threads pick back up; and Danny and Dewey get nicknames!

As the Crowes Flies (Whatever)

Is it too late to develop a peculiar affection for Dewey? It germinated at the end of last week’s episode, with his madcap truck-enhanced assault on Danny and Miller, and grew before the opening credits even rolled this week, with Cousin Crowe likening himself to a Predator drone and chasing after a runaway Gremlin on foot before trying to extort Boyd AND his Crowe cousins using the truckload of freshly imported Mexican heroin in a fit of self-actualization. This one’s for my pool, you can almost hear Dewey crying.

Back at Audrey’s, Danny turns up with barely any visible marks to show for his fight with the grille end of an HR Towing rig, while unbeknownst to the Crowe clan, Kendal has run away after witnessing Chelsea die under the wheels of a truck. Raylan, on Dewey’s trail since the episode’s opening seconds, shows up in time to bust Daryl’s plan to pay Dewey off with fake cash, then continues his streak of minor financial shenanigans by tricking Teena and Mina into helping him contact Dewey — thereby unintentionally shoving Dewey into the arms of none other than Dickie Bennett for help. (Well, if not for the thick plate of prison visitation Plexiglas between Dewey and Dickey.) Timothy Olyphant could fill a coffee-table book with Raylan’s catalog of discrete wry looks, and his jaw twist here at “I don’t think he took from that what I intended” is an all-timer.

The best plan the combined intellectual prowess of Dewey and Dickie can concoct sends Dewey to one of Boyd’s dealers (howdy, Cyrus) to unload the shipment. Dewey obeys an order of Wait Here, which is always a safe bet in Harlan, giving Cyrus the time he needs to tip off Danny to Dewey’s location. So, for those of you scoring at home: The Crowder-Duffy Family Circus Narcotics Federation has half the haul safely in Harlan thanks to Carl; the Florida Crowe Crew has the other half, less cuts for Flores and Cyrus, and probably a couple of other go-betweens we’ve already forgotten on this elaborate route. And as soon as they run out of heroin, they’ll get to do it all again!

By the time Raylan, who’s been doggedly pursuing Dewey this whole time, hits all the stops and circles back to Harlan, Wendy has dragged Kendal back home, giving Raylan convenient bait for an offer when he comes upon Danny preparing to lay Chelsea to rest: Disclose the contents of the drug duffel he’s carrying, and Danny can prevent Wendy and Kendal from being hauled in as accessories. Danny’s considered response is to bring up the 21-foot rule again, and if you’re sick of hearing about the got-dang 21-foot rule, you’re in luck! Danny’s death, like Danny, is nasty, brutish, and short.

Maybe the rest of the Crowes loved Danny like a rabid dog, like Danny loved his own dog. Because it’s Danny’s death — not Dilly’s disappearance, not Jean Baptiste’s disappearance, not Kendal’s revelation that Danny killed JB, and not the interference of federal lawmen or social services — that sets the fault lines between the living Crowes against one another with real violence. And where Raylan’s cut-short scuffle with Danny was highly stylized — Justified’s never short on Old West–inspired music cues, but the twang as these two squared off could’ve come from a high-noon pistol duel — the Wendy-Daryl dustup is up close and personal, and ugly. (And makes you stop for a moment to ponder the reality of just how hard it is to break a bottle over somebody’s head.)

You want to see something really scary? Look for a hint of Kendal’s future in Daryl’s face. See how it flashes hurt and angry, back and forth like a wounded child, in this week’s final two scenes. (Back in front of our fourth wall for a second: It also seems like Michael Rapaport’s clamorous Daryl accent, at an all-time distracting high last week, plays more naturally here than it has all season.) Look at how Daryl reels in Kendal with violent affection, once he realizes his nephew is the only one left willing to tell him what he wants to hear: “I’m a Crowe.” And dread finding out just what exactly that means.

WENDY: And what does Kendal’s declaration mean for her? Will she start up from the floor in next week’s opening minutes only to hear a truck roaring to life, and her brother absconding with her son? Will she cut bait and return to Florida? Will she try to rope in Raylan again? Will that shotgun behind the bar make a repeat appearance?

AVA: We were all set to believe Boyd and Ava were playing out a little bit of theater for the benefit of listening ears, a short play called something like I’m Saying Good-bye, But Not to Your Heroin, right up until Boyd went to the trouble of enlisting Candy/Teri to ensnare Officer Half-Pint, only to walk away at the last possible minute. If this is all still part of the plan, it’s pretty over the top. If it’s not … well, recall the look on Ava’s face last week. If she’s truly resigned to her situation, and she has really convinced Boyd to give up on her as well, that’s just tragic.

ALLISON: Woven back into the script in perfectly organic fashion as Kendal’s temporary safe haven, and apparently destined for more recurrences, if the protection plans Raylan crafts in the episode’s closing minutes are any indication. But do you buy her being in real danger from the Crowes, or is Raylan grandstanding? And while we’re picking up Allison’s dropped thread, what significance should we attach to Rachel’s repeated misgivings about her?

KATHERINE: What have we here? Psychic? Assassin? Both? Other?

This week’s Raylan-Art scene kind of turned us around on whether drawing out this feud is working. The repetition, looking back, makes it work; it’s totally plausible that these two would spend all this time throwing every kind of hurtful barb they can until a resolution presents itself. But. Shoving Tim and Rachel aside in all of Raylan’s subsequent plotlines, explicable as it might be given Raylan’s vacation and whatnot, just isn’t working for us. It’s been a crowded collection of episodes, with some delightful new additions (the Harris brothers, Agent Miller) and callbacks (Loretta’s entrepreneurship, Dickie and Dewey’s cackling reunion), but the way this song and dance is playing out makes the season feel paler than it would be otherwise.

2. “A lot of confidence for a man that wears shorts with combat boots.”

3. “Between that and the pleather, somebody’s gonna be in a world of disappointment getting this case.”

5. “Little Dipshit, you toss the bag over to Big Dipshit.”

6. “I don’t wanna hear about another one of your goddamn situations.”

9. “Under what charges would you detain us? Possession of newsprint?”

You know what? We hardly noticed. It might as well have been invisible. What a sad commentary on the state of Boyd’s empire. 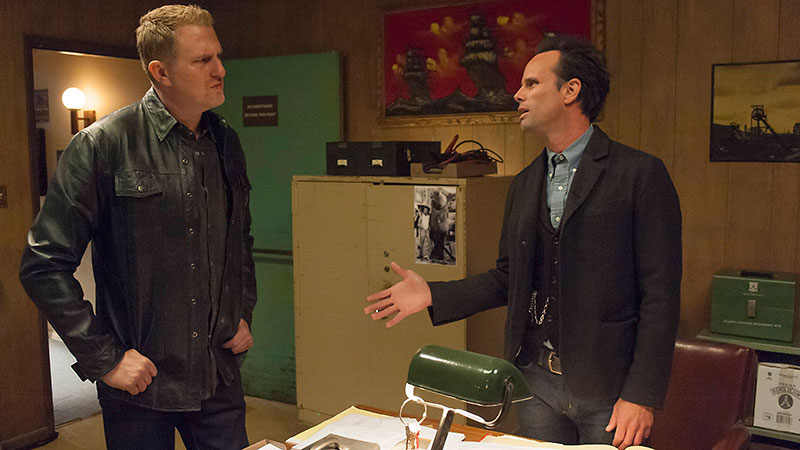 What new diseases does Kendal have now that he’s shared blood with his uncle? What’s going to happen when he’s forced, with both of them in the room, to choose between Daryl and his mother? What are the odds that Wynn and Picker get fed up with Boyd’s antics before Yoon and Ruiz do? Will Boyd face a challenge from Wynn before Daryl gets a new plan together? Or, heavens forfend, from Jimmy, who’s been awfully competent lately and looked awfully tired in this hour? And where will Dewey chase his Shawshank ending from here? I hope the aboveground pool is as blue as it has been in my dreams.