Spring Breakers Trailer: Bikinis and Big Booties, Yo, That’s What Life Is About 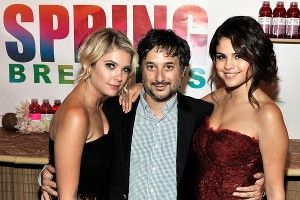 Eighteen years ago, when he was 22 years old, Harmony Korine wrote Kids, simultaneously one of the funniest and most heartbreaking “young people wilin'” movies of all time. In the years since, as a writer-director, he’s moved away from the linear indie stuff on which he made his name, and put together a singularly thorny filmography: It’s instructive to know that the title of his last full length, 2009’s Trash Humpers, was, for the most part, to be taken literally (plus, the trailer alone might give you nightmares). And so here comes Spring Breakers, which is not only Korine’s dramatic years-in-the-making return to youthsploitation, but also far and away his most commercial project ever. In the flick, ex-Disney starlets Vanessa Hudgens and Selena Gomez lead a crew of bad girls pulling a robbery to fund their spring-break trip; James Franco plays the inspirational rapper (“You can change who you are, yo”) who bails them out when shit goes wrong; and Gucci Mane plays a guy who says “Ya’ll wanna die tonight?” when shit really goes wrong. You’d fear that such a powerfully, awesomely strange swirl might doom Spring Breakers, crushing it under the weight of colossal expectations. But after two-and-half views of the new trailer, I’m already ready to declare Spring Breakers the Greatest! Movie! Of All Time! (Seriously, just check it out.) Spring break forever, bitches.

Lindsay Lohan Is a High-Class Escort?!? ... and Other Horror Stories From This Week's Tabloids