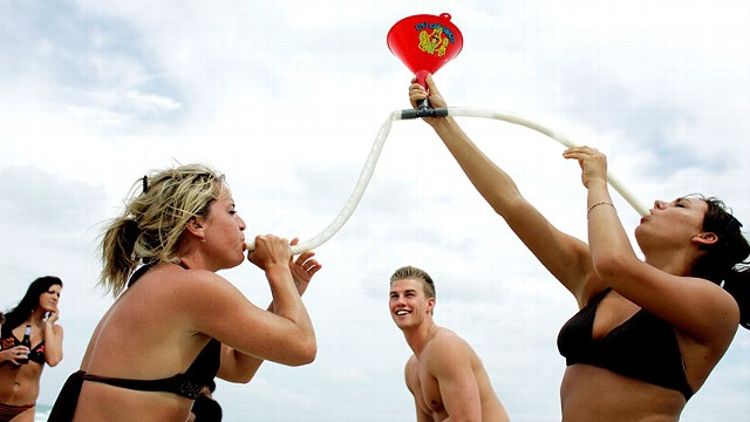 The Miami Heat’s epic winning streak may have ended, but the Florida Gulf Coast University Eagles are the NCAA tournament’s Cinderella story and Spring Breakers is a surprise hit. Here are five more reasons why Florida is the nation’s current cultural capital. The EDM bubble has yet to burst (or um, drop), and while we may look back at this era one day with all the head-shaking fondness now reserved for hair metal, right now is a good time to be an arena rave DJ or electronic musician in Florida. Particularly this month, when the annual Winter Music Conference is held in Miami in tandem with the electrocentric Ultra Music Festival. Diplo, who set out to be a world-famous DJ like Paul Oakenfold as a goof and ended up succeeding, also as a goof (Paul Jokenfold), titled his debut full-length album Florida in homage to the state he spent some years growing up in. Also inescapable: Carol City native Rick Ross’s lumbering trap rap, heard blasting in bottle service clubs and out of hulking cars, most recently encouraging you to slip Molly in your date’s drink and date-rape her. Florida has become the cool place to set an edgy film, just like Boston a few years ago. Who can resist shooting those sunsets and neon signs? Or all the crime bubbling under the surface? In Spring Breakers, director Harmony Korine milks every drop of lambent beauty out of its Kool-Aid-colored St. Petersburg setting, with loads of references to Brian De Palma’s Miami neon noir Scarface. Steven Soderbergh’s male stripper opus, Magic Mike, used the trashy majesty of Tampa as a background for Channing Tatum’s autobiographical tale of tears and tearaway pants. Then there’s Lauren Greenfield’s The Queen of Versailles, a documentary about the building of a ridiculous dream house in Windermere that turns into a psychological horror film about the Great Recession, won her last year’s Sundance directing prize. Michael Bay’s action-comedy Pain & Gain, starring Mark Wahlberg and The Rock, is set in Miami, where Bay launched his directorial career with the Bad Boys franchise. Shane Black’s summer superhero tent-pole Iron Man 3 is also set partially in Miami. (My all-time favorite Florida movie is Wild Things, a heavy-breathing ode to lust, corruption, threesomes, reptiles, and Bill Murray in a neck brace.) It’s also worth mentioning that with Los Angeles County’s controversial Measure B, studios are threatening to pick up and move to more porn-friendly paradises like … Miami. Overheard in Fort Myers: “A lot of people think this is Fort Misery. But now we’re Dunk City.” Everybody loves an underdog team, especially one that absolutely no one predicted the success of in advance. Today the FGCU Eagles face off against their more well-known rivals the University of Florida Gators for the title of Everglades champ. The one weak link in Bravo’s unstoppable Real Housewives franchise, the Miami branch, came into its own last season after a cast shakeup that added breakout Polish-American model/drama queen Joanna Krupa and included more time for scary Muppet/plastic surgery addict Mama Elsa. There’s also a pilot for Caribbean Wives of South Florida, which producer Maxine Tulloch made after being frustrated by the lack of Caribbean women on Bravo’s RHoM. Actual Floridian reality can be pretty weird, like the story of the polo tycoon who tried to adopt his girlfriend (MARRIAGE EQUALITY NOW) while in prison for 16 years after he killed a man in a drunken-driving crash or the bill that would allow school employees to carry concealed firearms, or the other bill that wants to outlaw bongs. Every year around this time, when tank tops and flip-flops start to become feasible once again, the nation’s fancy turns to Florida. Ft. Lauderdale is the best-known spring break destination, although it’s been supplanted in recent years by cities like St. Petersburg and Panama City Beach. Sure, people go to Texas and Mexico, too, but Florida remains the bacchanalian ideal, even it’s mostly something dreamt about from colder climes. For those of us who grew up in California, Florida is our California; the place to project fantasies about palm trees, flashy tropical façades, and sandy beaches full of hot young bodies in skimpy bathing suits. But whether you’re in Florida or just the Florida that exists in your mind, spring break is more than just a time or a place or a state of mind; It’s forever.