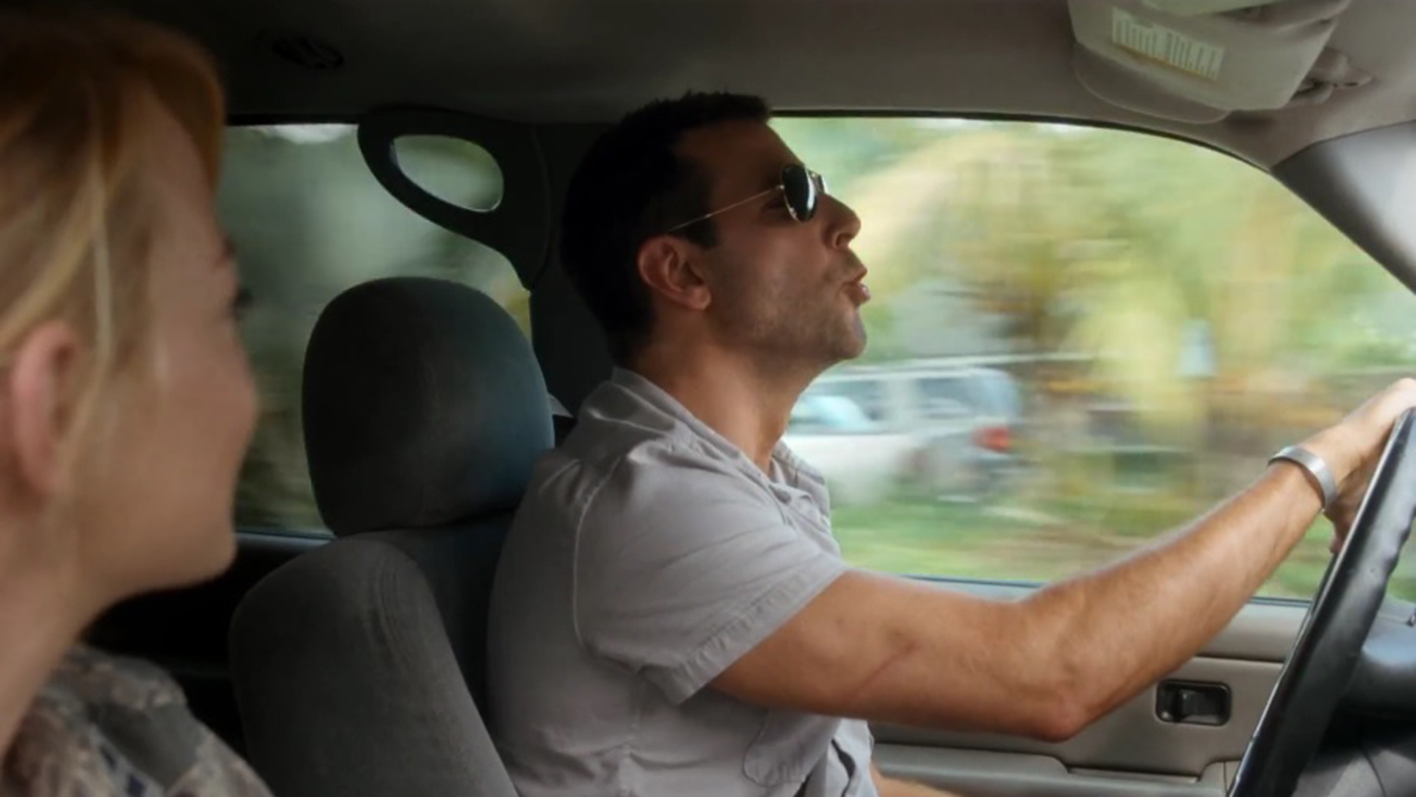 This post is full of Aloha “spoilers.” Read at your peril.

There is a scene in Aloha when, after consummating their relationship, Bradley Cooper’s Brian and Emma Stone’s Allison are lying in bed. As a kind of postcoital conversation starter, Brian shows Allison the rather unique result of a war wound he sustained in Afghanistan. He has two big toes. So chaotic was the surgery that saved his life, a doctor accidentally sewed the big toe of another bombing victim onto Brian’s foot.

Setting aside for a moment that Allison does not do the logical thing and immediately leap out of bed to take a Silkwood shower (she actually finds the toe thing pretty charming), I can think of no more apt image to sum up the structural problems with this movie.

This is a film with several big toes. Not many people saw Aloha this weekend. And while Cameron Crowe’s quasi-mystical romantic military comedy may have been doomed at the box office from the moment former Sony head Amy Pascal’s email was hacked, the problem with this movie is that it’s not a movie at all. It’s several.

Aloha has taken the better part of a decade to get to its anticlimactic opening weekend. As far back in 2008, there were reports of Crowe casting Ben Stiller and Reese Witherspoon in a film that was then called Deep Tiki. According to a Slash Film post from the fall of that year, this was the film’s plot:

Ben Stiller stars as a 37-year-old disgraced US weapons consultant named Brian Gilcrest, who is disliked by most everyone. His only friend is a techie named Jeremy “a super-smart and highly aware computer”. As a response to aggression from China, Gilcrest is deployed to a dormant military base in Hawaii to supervise the launch of an advanced spy satellite. Together with the anal and humorless Major Lisa Ng, he must secure the blessings of the native Hawaiian council before the launch. Gilcrest also gets a chance to meet with Tracy (likely Witherspoon), the one love of his life who got away, along with her husband and two kids. On the island he discovers himself.

Cooper replaced Stiller, Rachel McAdams replaced Witherspoon, Ng’s first name was changed to Allison, China’s aggression is reduced to a computer hack (oh, the irony), and Jeremy was written out of the script.1 Other than that, the broad strokes of the plot remain intact.

You could do a postmortem on what impact the Sony leaks had on this film’s creative process or commercial prospects; you could ask whether Cameron Crowe still has his fastball; and you’d be well within your rights to wonder whether Stiller was better suited to play a “disliked” military consultant than the hard-not-to-like Cooper. But the most interesting thing to do when sifting through the box office ashes of Aloha is to ask what could have been. What if Crowe had made just one of the three films he had on hand?

An elevator pitch of “Bradley Cooper has to choose between Rachel McAdams and Emma Stone” is the kind of thing that gets green-lit before the elevator doors open. But one of the few pleasures of Aloha is how the central love triangle of the film doesn’t fall into the “beleaguered stud must choose between two sirens” cliché. In fact, it doesn’t really involve Stone at all.

In the movie, Cooper arrives in Hawaii and is greeted by his ex, Tracy Woodside, played by McAdams. Over the course of the film, there are hints that Tracy is open to rekindling their flame — a stray touch of the hand here, a lingering stare there — but their reunion has more to do with healing old wounds than starting something new. Watching this all go down is John Krasinski’s Woody, Tracy’s stoic-to-the-point-of-mute transport pilot/husband.2

Aside from an inexplicable appearance at a Woodside family dinner, Stone has no real interaction with the McAdams side of the story. And there really is no place for her in this version of the film — one about three adults (Krasinski, Cooper, and McAdams), and two kids, forced to deal with some of the choices they made, and what they are going to do with the rest of their lives that might make them happy.

I think Crowe knew that this was its own story while he was shooting it. The domestic scenes featuring Cooper, McAdams, and Krasinski have an almost totally different rhythm and style to the rest of the movie. These moments are captured with handheld closeups and delivered with incredibly naturalistic performances (especially from McAdams). The characters are speaking a different language from the one that’s used in the rest of the film, and Crowe is telling a different kind of story.

The Military vs. the Private Sector 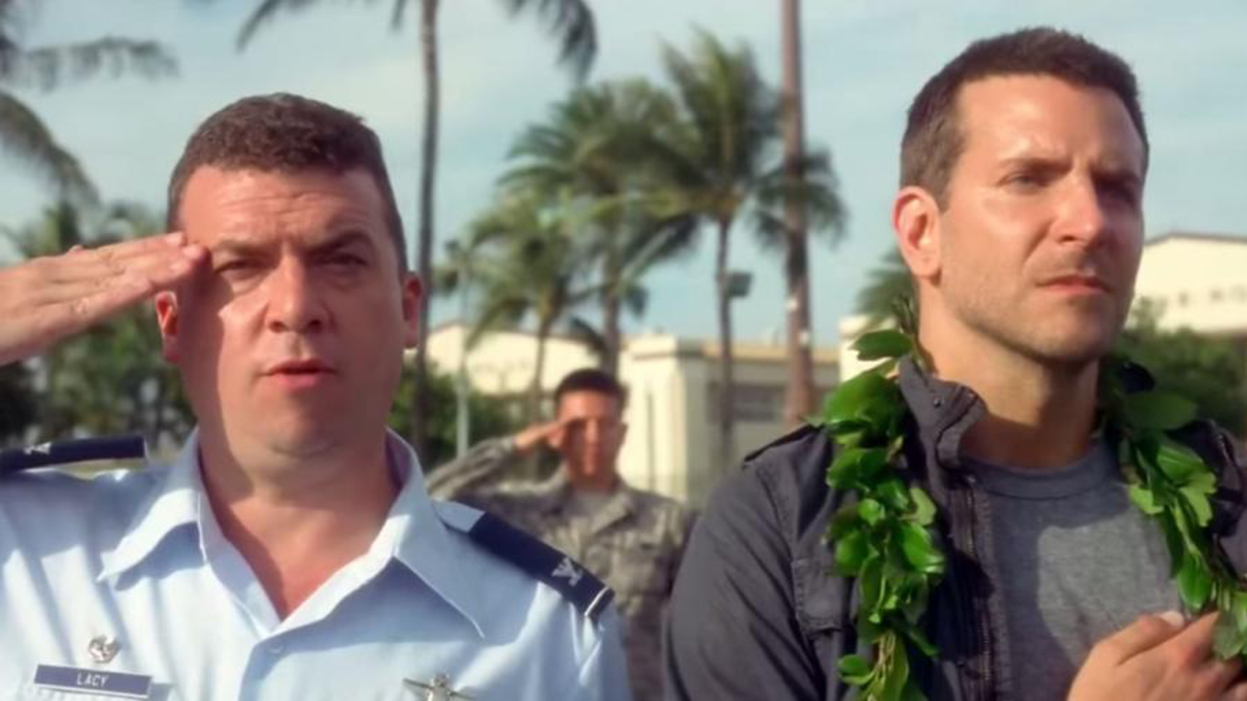 Crowe movies are as much about work as they are about love. Often one of those things distracts a protagonist from properly concentrating on the other. In Elizabethtown, Orlando Bloom redeems his shitty sneaker design by falling for Kirsten Dunst. In Singles, Campbell Scott throws himself into a high-speed train line for Seattle to get over Kyra Sedgwick. For most of Jerry Maguire, the thing that completes our hero is his job, not Renée Zellweger. And when it comes to jobs in Crowe movies, there is one central question: Can you give yourself to a profession without selling your soul?

Although Aloha has the trappings of a work movie, Bradley Cooper spends most of the film not doing his job. That’s because he’s too busy starring in the love triangle dramedy above and a Hawaiian Islands Playbook with Stone to keep any sort of focus on the real reason he came to Hawaii in the first place.

A movie in which a disgraced contractor is brought to Hawaii to launch a private satellite (with a secret payload) (sure), but learns the true meaning of life and love from his military liaison is a tidy 90-minute film. This would also allow Crowe more time to investigate the privatization of the military. Instead, whatever it is he has to say about that matter is rushed through, explained (somewhat) in an opening expository voice-over and a way-too-convenient scene at the end in which four characters sit in a bar and explain the last 20 minutes of the movie.

Cut Krasinski and McAdams and you get more time with Bill Murray’s droll eccentric space warlord, Carson Welch, more time with Welch’s biographer (played by Banshee’s Ivana Milicevic), more time with Danny McBride and Alec Baldwin, more time for Cooper’s Afghanistan backstory, and most importantly more time to show why Stone’s Ng character is considered such a rising star in the U.S. Air Force. (She is a fighter pilot who we see only in a fighter jet once.)

As it stands, most of these people have glorified cameos in a 25-character pile-up (Murray especially seems in tune with the mess he’s in).

Mother Nature lives in Hawaii. You go there, and witness the majesty of your surroundings, and have the feeling that you are communing with something larger than yourself. Crowe, at some time or another, went to Hawaii and got his clock cleaned. This happens. Not everyone makes a movie about it.

You can see what he wanted to say here. There’s a second-act detour, featuring real-life Hawaiian Dennis “Bumpy” Kanahele, playing himself, that takes time to outline the difficult relationship between Hawaii’s indigenous people and the United States government. The central MacGuffin of the film involves the blessing of a gate (you had to be there); Tracy’s son Mitchell is obsessed with the Hawaiian arrival myth; Allison is a quarter Hawaiian (at one point she yells, “I’m Hawaiian!”), and delivers plenty of slack-key, wide-eyed mysticism.

Crowe has been criticized for casting Stone to play a character of Asian American descent. But to Crowe’s credit, Aloha is clearly engaged with the history and mythology of Hawaii. He doesn’t just use it for scenery. But like everything else, the plight of the people of Hawaii eventually takes a backseat to the romantic plotlines of Aloha. There’s a Hawaii movie somewhere in Aloha, but you can’t shake the feeling that you could have transported all of the major characters to San Diego, or Nevada, or Puerto Rico, and had pretty much the same story.