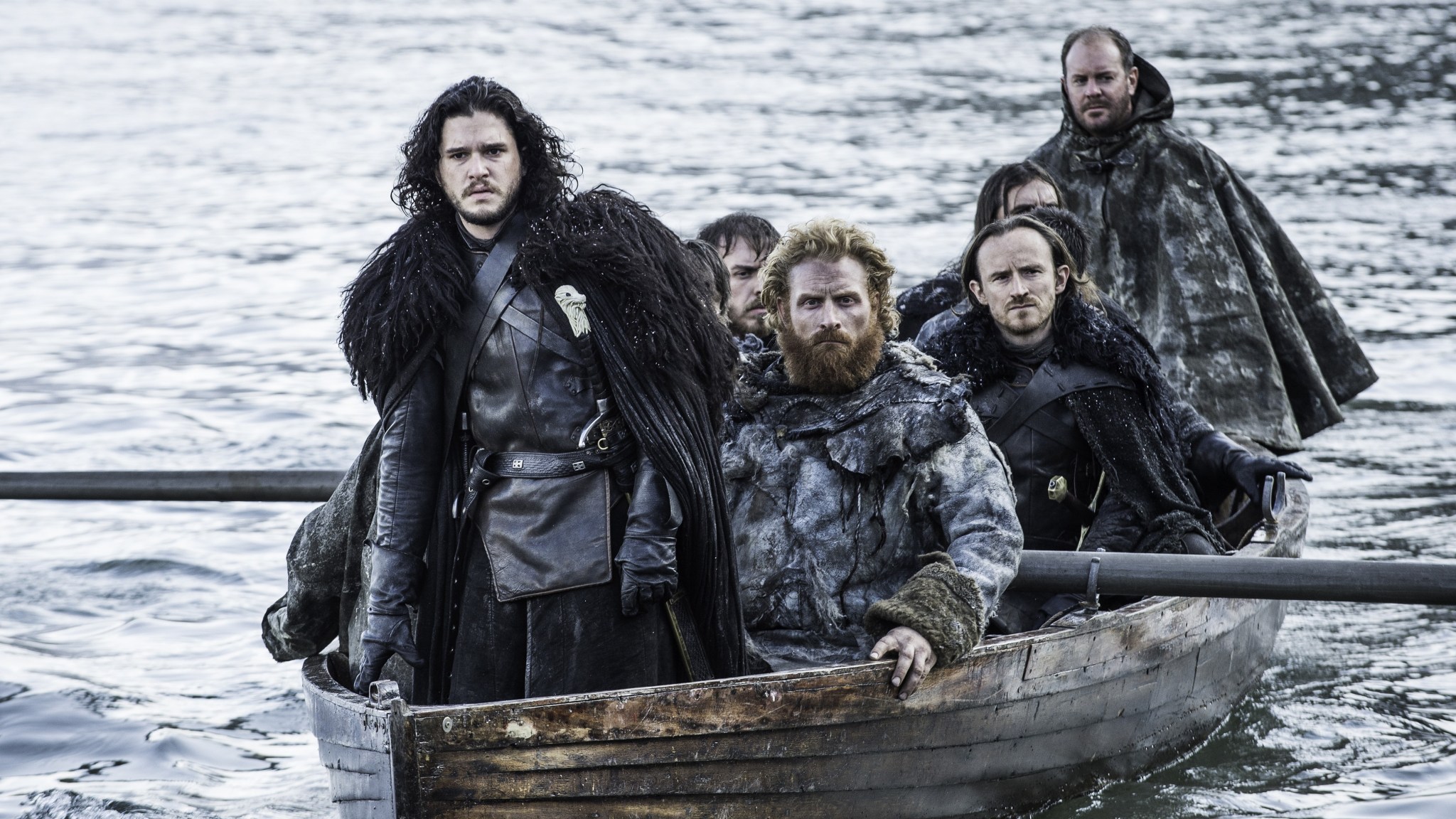 Even though it’s hard to remember over the death rattles of thousands of Free Folk, there truly was much to relish in the long-awaited tête-à-tête between the former Hand of the King and the current Mother of Dragons. Over a stingy pour of Meereenese merlot, the “two terrible children of two terrible fathers” made the most of their meeting, verbally jousting and admiring the cut of the other’s jib. “Why did you travel to the far side of the world to meet someone terrible?” Daenerys asks, a smile smaller than Rickon Stark playing on the edges of her mouth. “To see if you were the right kind of terrible,” Tyrion replies. “The kind that prevents your people from being any more so.”

As discussed in this space last week, Game of Thrones rarely rewards anyone in any way. And one of the show’s particular cruelties involves consistently denying skilled people the right to indulge their skills to the fullest. Consider: Jaime Lannister, expert swordsman, lost his hand. Theon Greyjoy, cock of the walk, was similarly cut down to size. And this week brought us the unforgettable image of Cersei Lannister, champion of red wine, forced to suck dungeon water off the floor like some kind of beer drinker. It’s more than unfair — it isn’t right. Game of Thrones presents us with an ensemble of perverse Beethovens and then forces us to watch them all go deaf in real time. So what a joy it was to see Tyrion, the best adviser in the Seven Kingdoms, once again tossing out something other than his own filth. When Tyrion mentioned Daenerys’s claim in relation to House Stark, House Baratheon, and House Tyrell, it was more than an overdue tightening of the belt of the world, a reminder that when a butterfly flaps its wings in Essos someone will inevitably be flayed a continent away. It was seeing Jordan finally return to the court, wearing the 45. Tyrion wasn’t born to wield power. He was born to conduct it, masterfully, like a symphony.1 Thrones doesn’t have to give us a happy ending. But it was nice to see someone we’ve come to care about enjoying himself, at least until the wine ran out.

As for the advice that rang out louder than the Battle of Hardhome? It was simple, direct, and totally ignored. “The Iron Throne,” Tyrion mused when told what his new Queen covets most of all. “Perhaps you should try wanting something else?” Amen, little brother! I realize that Daenerys thought he was joking and that banter is what binds the two of them together in spite of generations of bad blood. But you can take your quips, your army, and maybe even your dragons and drown them in the bottom of the Shivering Sea for all the good they’ll do you. Because last night’s episode of Thrones taught us that only three things can stop a rampaging army of pickax-wielding, undead popsicles: obsidian, Valyrian steel, and 6 to 10 inches of shallow water. In other words, Tyrion’s right. Stay on your side of the ocean, Dany! Settle in! Learn to love the fighting pits! Learn to love staying alive!

“Hardhome” was a remarkable episode for any number of reasons, not the least of which was the way it reversed what had been a lamentable slide in week-to-week quality. This was the Thrones that America had been waiting for: delirious with action, rife with significance, and mercifully free of sexual violence. I can’t speak to how it played in book-reading homes — you’ll have to wait for the Maester’s column on Tuesday for that — but to me it was like being whacked in the forehead by all 900-plus pages of a Martin hardcover. It was surprising, it was dense, and it left a hell of a bruise. Though I’ve questioned the timing of showrunners David Benioff and D.B. Weiss in the past, one can’t say the same of the White Walkers. They crashed the party at exactly the right moment for maximum excitement and minimal survivors. The slow, meticulous world-building of the first few seasons and the gradual world compression of recent weeks have each given way to something far more harrowing: world destruction. What the hell does it matter if Tyrion and Daenerys are playing footsie now that the apocalypse is playing for keeps? 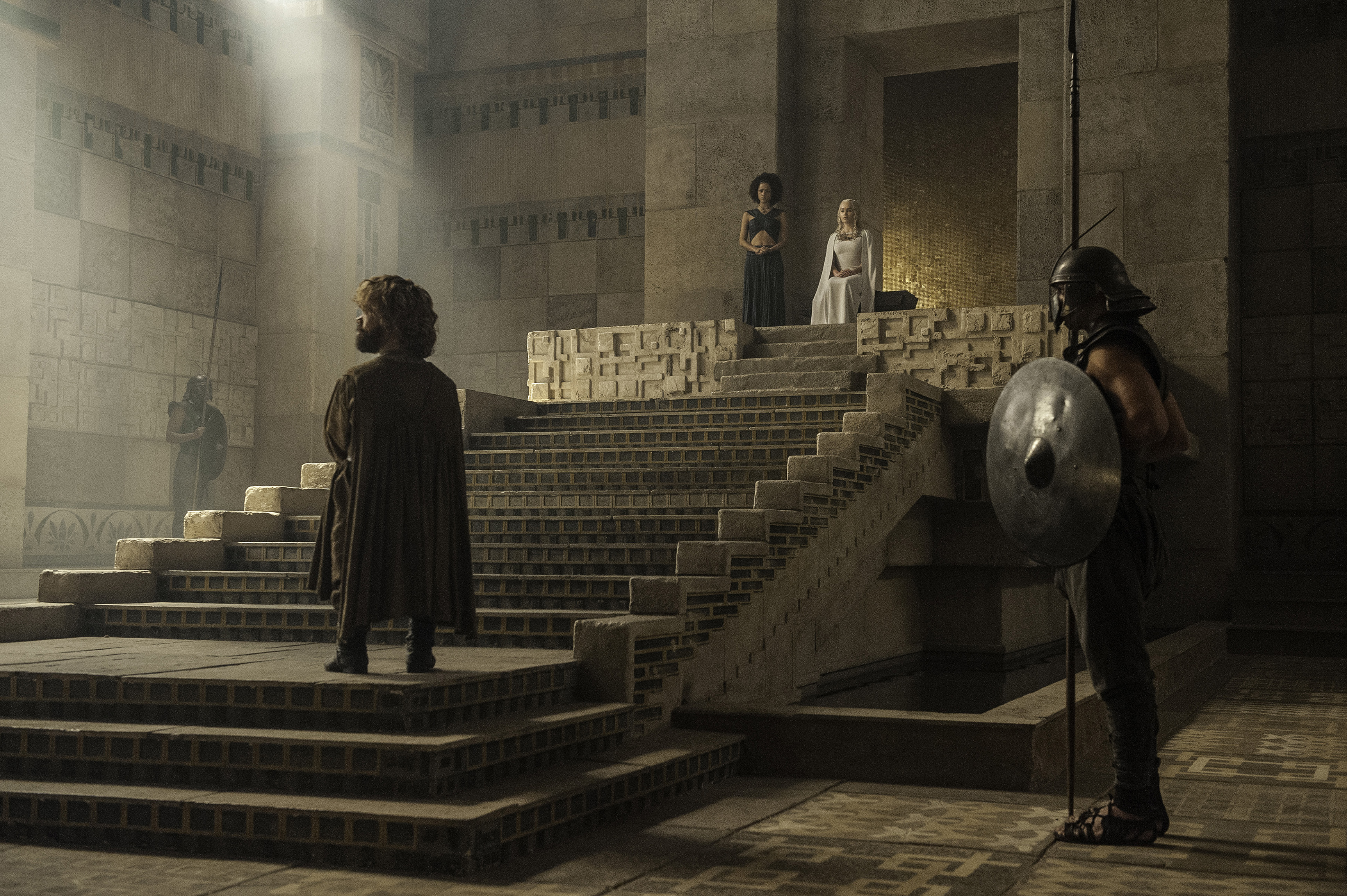 This is thrilling stuff and enormously gratifying, too. The final 20 minutes of “Hardhome” go on the highest shelf in the trophy case alongside “Blackwater” and “The Watchers on the Wall.” These are the episodes that make all the long weeks of chatter, road trips, and Theon worth it. Only Game of Thrones is capable of adrenalized wide-screen insanity like this, a CGI-and-blood-drenched summer blockbuster set in the chilly heart of winter and designed specifically for your Sunday-night pajama time on the couch. But so, too, is Game of Thrones the only place to see small-bore character beats that tremble with the accumulated emotion of five years’ worth of story. To see Lena Headey quake and crack with misery and dehydration or Maisie Williams let her face go slack in service to Essosi aquaculture is to appreciate the long game as much as the quick strike.2 In 2015, there are plenty of noisy shows and a good number of subtle ones. But only Game of Thrones is equally fluent in explosions and implosions. It can break your heart as easily as it can break someone’s face.

And that’s what lingered most last night, as the credits rolled and the shaking subsided: the tragedy and horror of it all. Yes, there were fat flakes of fanboy cool sprinkled throughout the scrum — Jon’s discovery that Longclaw makes for a hell of an ice pick and the foul-mouthed giant picking away death-skeletons like bothersome gnats chief among them. But Miguel Sapochnik’s dizzying camera never lost sight of the fact that this wasn’t an epic battle. It was a supernatural slaughter. There could be no winning, only teetering levels of not-totally-losing. Karsi, the fierce warrior from House Bella, got her kids on a boat (along with a whopping fish tale about how she’d be right behind them) but more or less gave up the moment she saw the wight children staring daggers as sharp as the ones she was holding. (I hated seeing it, but I loved how her death was shot, as a complete capitulation to a waking nightmare where the only relief is the opposite of waking up.) Tormund and Jon fought valiantly, but both were forced to turn tail and run in the face of the inevitable. This was a particularly bitter irony when you consider the way Game of Thrones began: Ned Stark, still the closest thing the show has ever had to a traditional hero, decapitated a man of the Night’s Watch for turning tail at the sight of a White Walker. Yet that was more than shame radiating off of Kit Harington — never better, by the way — at episode’s end. It was complete and utter hopelessness. Every man, woman, and child in the Seven Kingdoms knows what it is to fight against their own death. But to take up arms against an entire army? Impossible — and every person on every one of those boats now knows it.

Still, Evil King Edgar Winter (or should I say Dread Ser Cokenail?) couldn’t resist spiking the ball. His dramatic taunting of Jon made for excellent theater, but I took it as an even better sign for what’s to come. It suggested that whoever Frosty turns out to be, he’s got a lot more personality than the chilly stiff I was afraid of. This is a guy who waited until the moment of rescue to attack, spent the bulk of the battle pacing the sideline with Belichickian disdain, and then, when the day was his, gazed upon the losers and basically gave them one of these. We don’t even know the dude’s name, but he’s already the biggest and best villain in a show lousy with them. Who else is going to take his blue, spiky crown? Ramsay is a monster, sure, but Edgar is a force of fucking nature.

Which is to say, it might be hard to continue to care about a few snowflakes when an entire blizzard is massing just on the edges of the radar. Look, far be it from me to rain on this blustery parade. I’m thrilled at the gear Game of Thrones found last night — the first hit of the pure stuff after 47 hours of warnings about winter will do that. But it’s worth mentioning that there are two episodes left this season and quite possibly 20 additional episodes (or more!) lurking past that. If using dragonfire to melt Edgar and his minions is the endgame, then buy me a parka and sign me up. Still, I have to ask: Will it be possible to downshift back into minutiae now that we know what’s coming — and coming fast? All the questions that have bedeviled us for years suddenly seem downright trite. Who controls the North? Will Tommen leave his chambers? Dorne: Why? Does anyone honestly care? Even Arya’s deep dive into raw bar management feels extraneous now. And yet there’s no way Thrones can allow the existential tumult of “Hardhome” to trickle down into every one of its myriad plots, at least not yet. There are too many hours to fill, too many scuffles in Meereen to adjudicate. But not even Mrs. Lincoln was forced to sit through the rest of the play.

Yet here’s the thing: This isn’t a problem for me to worry about. It’s for Benioff and Weiss to solve. Besides, it shouldn’t be much of an issue in the short term. Stannis’s assault on Winterfell will arrive long before actual winter. And in King’s Landing, our old friend Qyburn seems awfully qylose to unleashing whatever steampunk Frankenstein’s monster he’s crafted out of the man who used to be known as the Mountain. (Is a Cersei rescue on the horizon? And does that mean Sister Ratched’s face will go the way of Oberyn’s? We’ll soon see!) And the truth is, the blast of arctic terror in “Hardhome” was just what the Maester ordered. A few weeks ago, I openly wondered, in the absence of Joffrey and Tywin, if Game of Thrones had a villain problem. Then, in the wake of Sansa and Ramsay, I wondered if the true villains may have been the showrunners themselves. Now we’ve been reminded, in the starkest terms possible, what it will mean to fight the real enemy.

While I was losing myself in the weeds of misery that grow thick in Westeros and Essos alike, I lost sight of the nature of the story I was watching. Despite the way it may feel during down weeks or even down seasons, Game of Thrones is not about eternally spinning wheels of suffering. Rather, to use Daenerys’s words, it’s about smashing those wheels into a million pieces. Which is to say, Game of Thrones isn’t another tired conflict over the soul of the world. It’s an all-out Ragnarok over the continued existence of it. The Iron Throne? Who needs it? In the scheme of things, it’s just a particularly heavy deck chair on the Titanic. What we saw last night, at long last, was the entirety of the iceberg.