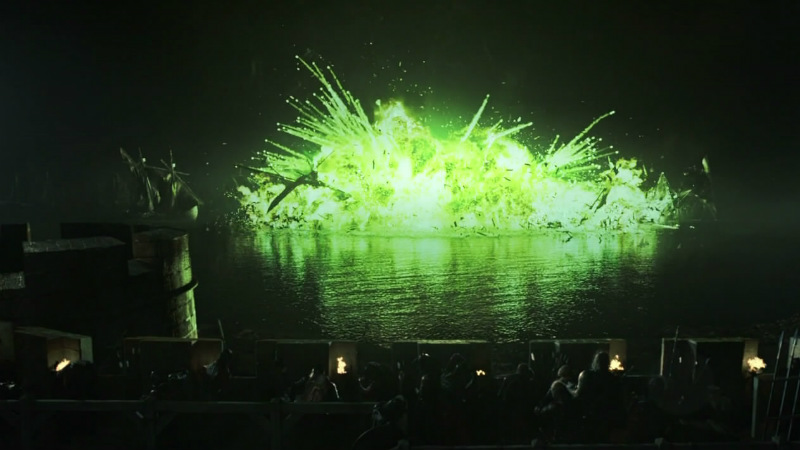 There’s a fair amount of preening and posturing in the upper classes of Westeros, from Theon’s impatient egoism in the North to Joffrey’s bloodthirsty bitchiness in the South. But it’s been clear for awhile now that the only people who really understand what’s at stake in the titular Game of Thrones are those who don’t need to pretend to be something they’re not. The most successful players are all terribly, visibly scarred: Bronn and his oft-broken nose, Tyrion and his equally shattered heart, Varys and his missing bow and arrows. In “Blackwater” — the noisiest, wildest episode of the series to date, a bravura battle royale of action, emotional savagery, and unanesthetized trepanning — the biggest turn was reserved for the most marked man of all.

Sandor Clegane wears his brutal past on his face like a mask, a terrible Tyson tattoo of violence and regret. The Hound began the hour playing the part of the dutiful soldier, a doubt-free killing machine, less interested in defending the honor of his fraudulent king or the walls of his fetid city than in doling out the ferocious punishment that is his stock-in-trade. As Stannis — himself a bad actor, pursuing the crown out of childish spite and witchy infatuation — storms the walls, Clegane’s giant sword splits Baratheon bannermen like so much kindling before a long winter. Yet it’s the Hound himself who breaks. “Look at me,” he fumes to Sansa through wine-stained lips after retreating from the battlefield. “Stannis is a killer. The Lannisters are killers. Your father was a killer. Your brother is a killer. Your sons will be killers someday. The world was built by killers. So you’d better get used to looking at them.”

Of all the impressive feats accomplished by this remarkable episode, this may have been the greatest of them all, revealing the palpable sadness at the root of the Hound’s sadism. Despite his burned and battered visage, he’s no monster, merely a man sickened by all the hypocritical, monstrous things he’s seen other, supposedly better men do to one another. There are no great heroes in Westeros, only murderers and survivors. So what good are Bronn’s “beautiful women and brown ale”? There are plenty of beautiful women in the ground and the brown ale is only temporary relief — soon it will be flowing into Tyrion’s beloved cisterns or choked up into a floating bucket of sick. With the water on fire and his life on the line, Sandor Clegane used his one good eye to take a clear-eyed look at the real cost of other people’s games and did the most reasonable thing of all: He walked away.

The rest of the poor bastards caught up in the siege of King’s Landing weren’t so lucky.
Cursed by low circumstance or high birth, the ragtag group of men and half-men that defended and stormed the gates were caught up in a vicious cycle far beyond their control, their lives no more or less valuable than the heavy rocks dropped from the parapets onto the soft skulls below. This legion of CGI-spattered extras wasn’t blessed with the same “What’s it all about, Alfie” perspective as Clegane, but, thankfully, those of us in the audience were.

Until now, Game of Thrones has told its stories through smaller gestures: a clumsy beheading, a direwolf pounce, a brotherly grope. There were glimpses and hints of unchecked violence lurking just beyond the frame — most memorably when the starving mob dismembered a member of the royal party in “The Old Gods and the New.” But the horrors of the Seven Kingdoms finally went widescreen in “Blackwater.” This was war in the way we’ve never witnessed it before on this show or any other: explicit, confusing, all-consuming. Finally we saw the source of Robert’s alcoholic sloth, Ned’s suicidal dignity, and Tywin’s emotionless glare, not to mention the reason for the careful, season-long hoarding of HBO’s budgetary gold (this was money well spent, even if the network’s subscriber fees alone could make you the richest man in midtown, let alone Qarth). The brinksmanship and backstabbing that for 18 episodes seemed to define Game of Thrones, all the big-timing and Littlefingering, suddenly felt as weightless as a baby made of black smoke, a indulgent trifle encouraged only in the years between ringing of the bells. There was nothing noble about the battle of King’s Landing. It may have been cool to watch Bronn dancing through the carnage with a smile on his face, but my mood hovered closer to the Hound’s. Stannis’s goals and Tyrion’s words may have been lofty, but their actions were down-and-dirty. This is what these people are, this is the show we’ve been watching; like Sansa, we were finally forced to confront it.

Until Tyrion starts pouring Honey Nut Cheerios in his icemilk, no one should spend much time comparing Game of Thrones to The Wire. Both were sprawling, multi-character epics, yes, with a lovingly rendered sense of place undercut with a nasty streak of nihilism. But it’s hard to tell what, exactly, Game of Thrones has to teach us about our own lives that we don’t already know. (Trust warlocks as much as you’d trust your mother? Pitching a tent means different things on different sides of the wall?) Where the two overlap is structure: Each season of The Wire came to a head in the penultimate episode, usually written by novelist George Pelecanos with his typical flair for unsentimental shock. This year, Thrones has done the same, entrusting the biggest hour of the season to author George R.R. Martin. But the challenges of “Blackwater” were much greater than those in his previous scripting credit, 2011’s “The Pointy End”; that episode offered a lesson in swordsmanship, this demanded a post-graduate lecture.

The bulk of “Blackwater” played like Downton Abbey tipped onto its side; instead of upstairs vs. downstairs, we had outside vs. in. No matter where he stood, Tyrion was an unlikely hero, bravely manning the walls his punk nephew was quick to flee. The revelation of the imp’s secret plan — ghost-riding a single, wildfire-laden ship to meet the Baratheon fleet — was legitimately thrilling, topped only by its roaring success. (I haven’t seen a green bomb that size since last summer.) While Joffrey shriveled, Tyrion rose to the occasion, inspiring the dubious, outnumbered troops and ordering fusillade after fusillade of burning arrows (which resulted in the highest concentration of flaming Baratheons since the dearly departed Renly). Whether he was swapping macho banter with Bronn or sneak-attacking his enemies’ knees like an opportunistic Denver Bronco, the little man’s stature has never been higher, no matter if he ended the hour cut back down to size. (Dinklage’s performance was outstanding as usual, but I couldn’t help but think the deadness in his eyes as he lay bleeding in his squire’s arms was less a precursor of Tyrion’s demise and more of an actor’s sad realization that from here on out he’ll have to report to the makeup chair three hours early for scar continuity.)

While the boys bashed each other’s brains in, Cersei maintained a long, punishing siege on her own liver. Despite the grim circumstance, it was a delight watching the Queen Truman Capote her way through the battle, keeping her spirits up with multiple glasses of spirits and a steady barrage of quips at Sansa’s expense. I think even Eve Ensler would have drawn the line at the third or fourth reference to the young Lady Stark’s “red flower,” but it was hard to blame Cersei for her relentless assault on Sansa’s faux-piety. Despite the wine, the Queen could see right through her would-be daughter-in-law’s double game, singing hymns while praying for Joffrey’s death, all under the watchful, twitchy eye of Ser Mike from House Pollos Hermanos, a would-be protector actually there to slaughter them all if need be. By the time she was perched precariously on the Iron Throne, muttering about lion cubs in the King’s Wood and prepared to poison her own son/nephew, Cersei was as fried as the Hound, ready to drop the mic (and a few f-bombs) on the hypocritical hell that is life in the Seven Kingdoms. Tywin may have saved the city and the day, but the triumph of “Blackwater” was that even such an unlikely victory could feel as hollow and empty as a loss.

By behaving like a nervous teenager and climaxing an hour early, The Wire was able to reserve its season finales for the tying up of loose ends and the unfurling of overly long music montages. It’s hard to imagine next week managing anything quite so tidy. Not only are entire story lines still dangling in varying stages of crisis from Winterfell to Qarth, the consequences of Tywin’s surprise success have yet to be determined.

What will be done with the defeated Stannis — and what trick could Melisandre possibly have up her, um, sleeve that could save him? Has the Onion Knight been well-and-truly caramelized? And most of all, what will become of the Hound? As the season marches inexorably to a close and the various remaining heirs and claimants continue their slow, sad slog toward a meaningless prize, it fell to a ruined man to see the folly at the root of it all. Clegane isn’t even a knight, yet he wields the most powerful weapon in all of Westeros: the ability to say enough. At the close of Game of Thrones’ best hour, he’s suddenly a surprise contender for the show’s greatest creation.

Note on these recaps: I have not read the books and I have no intention to do so. My goal is to analyze and enjoy Game of Thrones strictly as a television show. So please, no spoilers or “I told you so”’s in the comments, OK? OK!