Sofia Coppola’s Journey Into the Heart of Low-Culture Darkness 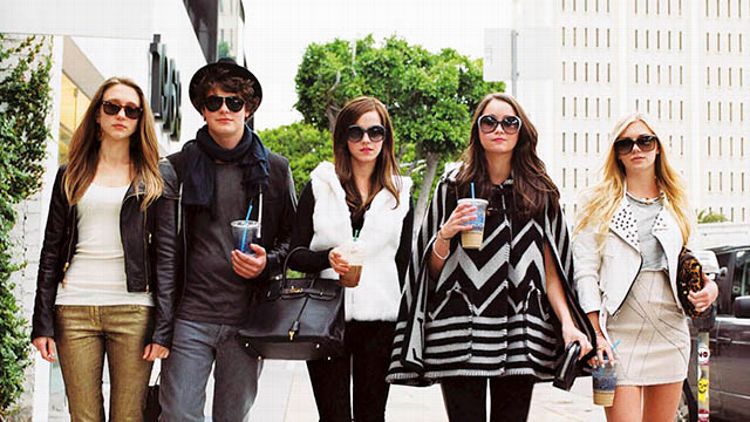 Sofia Coppola is by no means a universally beloved filmmaker, but there were a few years there where she was pretty damn close to being one. Her first two features, The Virgin Suicides and Lost in Translation, captured a certain youthful zeitgeist; as a tastemaker, Coppola effortlessly spins an atmosphere of pretty, hazily lit wistfulness that one wishes one could just bottle and spray all over oneself while listening to Moon Safari on vinyl (or, barring that, just some Marc Jacobs perfume). Coppola’s detractors tend to point to her emphasis of style over substance, but the reason her work has resonated so well with critics and teenagers is that she lets us luxuriate in youth and beauty and pretty objects while vaguely implying that there’s something empty about it all. She lets us have cake and eat it, too. And then gaze with chic dissatisfaction at the crumbs.

Coppola is generally a pretty elliptical storyteller, employing only the most feather-light criticism when it comes to contextualizing the characters in her stories. This is made easier by the fact that tackiness and cheapness is verboten in Coppola’s world; even the strippers in Lost in Translation danced to a Pitchfork-approved Peaches track. Which is why The Bling Ring, with its venti Frappuccinos and Juicy Couture tracksuits, is such a jarring turn for her. For the first time, Sofia Coppola the Social Alarmist is raising her head, which (I would argue uncoincidentally) is also the first time she’s chosen to tell a story about middle-class characters with less-than-W-magazine-worthy taste. Stephen Dorff can booze and sad-fuck his way to an early death, Marie Antoinette can try on Manolos while France starves, but we are still instructed to empathize with them, via the signature window-gaze shots that have become Coppola’s shorthand for character depth. Meanwhile, The Bling Ring‘s Nicki and Rebecca, desperate Valley-dwelling outsiders with comparable transgressive streaks, get no such moments in The Bling Ring, and no such sympathy from Coppola in the numerous interviews she has given leading up to the film. You can practically hear her knuckles pop as she wrings her hands in this recent New York Times Q&A with Lee Radziwill:

Coppola: When I read the Vanity Fair article about these kids, it summed up everything that I think is declining in our culture. And it just doesn’t feel like anyone is talking about it. Kids are inundated with reality TV and tabloid culture so much that this just seems normal. When I go to a concert, everyone is filming and photographing themselves and then posting the pictures right away. It is almost as if your experiences don’t count unless you have an audience watching them. There are even videos of kids having their sweet-16 birthdays and they want a red-carpet V.I.P. theme. This movie was about an extreme version of this.

Radziwill: Does that fascinate you or frighten you or bewilder you?

Coppola: It frightens me, and it just seems like this trash culture is becoming acceptable as mainstream culture.

By “trash culture” (feel the burn of that value judgement!), Coppola seems to be referring to a kind of democratization of the trappings of celebrity, which has been aided by social media and the easy access to large-scale broadcasting it provides. Before the Paris Hilton age, there was a mostly unscalable wall between how famous people dressed, talked, and spent their time, and how normals like you and I could. But now “Celebrities — They’re Just Like Us!” has become not just a weekly tabloid feature but a kind of generational mantra. For people like Coppola and Radziwill, who have been at least limelight-adjacent their entire lives, of course this would feel like a violation. The peasants are storming Versailles, not with torches but with smartphones.

The kind of fame-obsessed teenagers Coppola lampoons in The Bling Ring are same kind of Tumblr naifs who reblog GIFs of Kirsten Dunst idly frolicking in the Hameau de la reine and Scarlett Johansson brooding out the window of the Grand Hyatt Tokyo. The same suburban would-be fashionistas who page lazily through tabloids, IDing Miu Miu from Prada mid-yawn. The only thing better than having a life of luxury, after all, is having a life of luxury and being bored by it. Lost in Translation flatters its audience by showing them the vibrant excitement of Tokyo, then turning to us and saying, “Ugh, isn’t this a bummer?” If you buy into that conceit (which necessitates buying into Scarlett Johansson and Bill Murray’s existential malaise), you leave the theater feeling pretty cool: a newly minted expert in upper-class angst no matter your socioeconomic reality. (Coppola isn’t the first filmmaker to deal in this kind of melancholy escapism; it’s a bit of an Italian specialty, though it has had its more imaginative moments.)

The Bling Ring also attempts to flatter us — not by encouraging us to identify with the rich, but encouraging us to sneer at the middle-class casualties of “trash culture” who can barely be called the film’s protagonists. Rather than search for depth or complication in Alexis Neiers and Rachel Lee’s shocking amorality (which has been begging to be explored ever since the real-life story broke), the film wags its finger at them and plays them for laughs. In her past films, Coppola has tended to engage in the kind of relativist storytelling that is so in vogue now, floating above any real commitment to an artistic agenda or statement, keeping her characters behind a veil of ambiguous, barely verbal coolness, but The Bling Ring finds her suddenly very literal about what she thinks of her characters, and what kind of punishment they deserve. It’s essentially a more humorous and better-cast and art-directed version of the 2011 Lifetime movie of the same name (Re-airing June 28, y’all!) — still too busy gawking at the juicy, obvious wrongness of it all to get to any second- or third-level insight. Coppola is a tourist in the teenage wasteland of the San Fernando Valley, and just like the heroes of Lost in Translation, she’d rather stay in her hotel than get to know the locals.

The Bling Ring has and will continue to be compared to Spring Breakers, another 2013 release that saw children playing with guns and hungrily chasing after a lifestyle. But unlike Coppola, Harmony Korine took his heroines’ amorality and ignorance for granted and instead focused on the ways in which they were just normal teenage girls. In between shooting rampages, Brit, Candy, Cotty, and Faith engaged in impromptu Britney Spears sing-alongs and did handstands in the hallway. Like Tony Soprano and his descendants, the multitude of grizzled male antiheroes on television, we are made to deal with their sympathetic and their monstrous qualities at once. All great human dramas feed off that tension, but it requires a certain metabolism for ugliness, which, clearly, Korine has. Korine drenches his film in neon and leopard print, while Coppola holds it out at arm’s length and giggles at it. Neither decision is wrong, per se, and Spring Breakers‘ significantly more successful box office performance can largely be chalked up to its widely publicized prurient appeal and the star power of Selena Gomez, but I’d argue that Korine’s approach is the more humanist one and opens up more avenues for interesting storytelling, if you can get past the slow-mo bouncing tits.

Most films and TV shows ask us to identify with special people in extraordinary circumstances. But there are also plenty of stories to be told about people like the real-life Bling Ring and the Spring Breakers girls, who are not special but desperately want to be. I wish that a filmmaker who has demonstrated more of an understanding of that basic human plight would have taken on this story, but Sofia seems to be on Paris Hilton’s side here, determined to put the parasitic commoners in their place. Coppola has stated that she changed the names of the gang because she “did not want to make them more famous for what they did.” You hear that, Alexis Neiers? No fame for you!