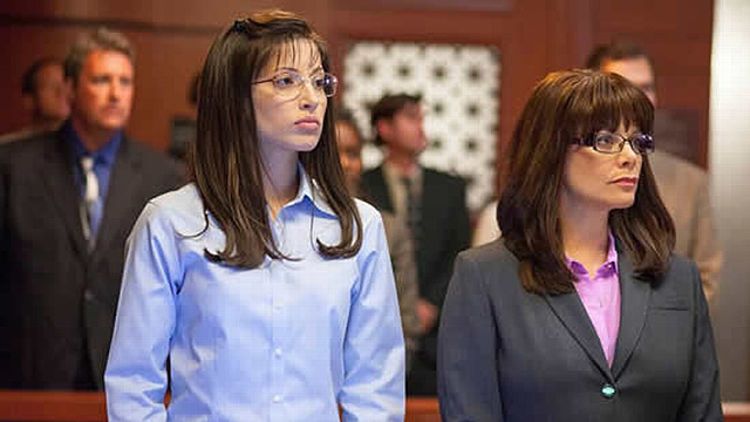 Lifetime movies have no allure to some people. They take 10 minutes to make and, in the case of the Jodi Arias legal saga and Lifetime’s filmic homage, Jodi Arias: Dirty Little Secret, sometimes begin production before the real-life story has ended (a new jury will be chosen for a second penalty phase in mid-July, because the original jury couldn’t agree on a sentence after finding her guilty of first-degree murder in May). They’re over-the-top, stuffed with mistrustful women in baseball caps and ultra-soft-core makeout sessions in hotels. No matter the location of the crime, Lifetime imbues it with the essence of mid-’90s condominiums. Laundry and yoga feature prominently.

If you caught Dirty Little Secret hoping to learn something new about Arias and her sometime boyfriend Travis Alexander, you were shit out of luck. No groundbreaking information could be found here, no revelations, just pure based-on-real-events poetry: a blowjob melting into a baptism, complete with a brilliantly placed glistening forearm; two-word texts accompanied by 50 zillion clicking noises for dramatic effect; and, of course, some creepy details from the trial slipped in for good measure (the holding-cell handstand and possessive TRAVIS logo apparel, for instance), though nowhere near enough factual trivia to appease anyone who watched the proceedings from beginning to end or, I’m sure, the enthusiastic Jodi fan base. Arias’s 18 days (an “unprecedented” and ultimately damning excess of talk time) on the stand were filled with bizarre reversals, meanderings (Pop Rocks), and TMI bombs, and including it all would have been impossible. This is a Lifetime-flavored reduction for the books, a guilty pleasure made guiltier by the effects of the network’s ever-increasing haste in adapting murder stories (see also: Amanda Knox), but still some distant cousin of pleasure nonetheless.

Arias’s 2008 murder of Alexander, a Mormon marketer and motivational speaker, is a gripping story: Beyond the grisliness of the crime itself — which involved a bullet to the head, dozens of stab wounds, and a sliced throat — there were the epic themes of religion, sexuality, and obsessiveness. Lifetime approaches this from the Fatal Attraction angle, trying its very best to humanize the villain into a kind of tangentially relatable Alex Forrest. The uncannily good casting (Lost’s Tania Raymonde plays Arias, and The Mob Doctor/soap star Jesse Lee Soffer is Alexander), always a Lifetime strength, makes watching Dirty Little Secret feel like the glossiest visual fan-fiction experience you could ever have. The performances are so far from condescending it’s almost wrong: The chemistry is believable, the chilling hymns sung chillingly, and even Arias’s grandma seems willing to go for the layered acting. This is hard to believe when the dialogue requires that they seriously and repeatedly compare each other to strong, hot cups of forbidden coffee, or chat with ghosts in incarceration monologues, but there it is.

Because the real Arias has proven herself to be a totally unreliable narrator who gave three different accounts of the events surrounding Alexander’s death, Dirty Secret has a lot of wiggle room in imagining the intricacies of the pair’s relationship: Arias testified that Alexander pursued her after their first meeting in Vegas, but Lifetime runs with the motivational-speaker hook (a good one!) from the get-go, which means Arias interprets her victim’s The Secret–ish presentation (ominously: “putting a bull’s-eye” on your goal) as an invitation to follow him into the men’s bathroom, where she inserts her stalker talons into him as he uses the urinal. After relentless years of playing Alexander’s secret girlfriend/naughty plaything, Raymonde’s Arias seems to catch a hint that he’s just not that into her, but just one more hit of Alexander’s “get what you want” teachings and her pendulum swings right back to the dark place, compelling her to relocate to Arizona to be close to her ex. It’s too much of a stretch to paint Arias as reasonable, but Soffer’s somewhat dippy Alexander always leaves the door open a crack due to a combination of lust and ill-advised friendliness.

Arias’s exclusion from Alexander’s religious clique contributed to her paranoia, according to Lifetime, so happy shots of Book of Mormon chatter over orange juice seem to be captured through Arias’s sad, lonely, hobbyist-photographer lens. Even the pool-beej-baptism segue drips with “Oh, girl”: The only sympathetic trait that Arias has seemed able to maintain is that she was almost undoubtedly crazy in love. Actually crazy, too, but Lifetime focuses on the nuttiness of passion. Director Jace Alexander, a Law & Order vet, said that he understood how Arias could have had her “psychotic break”: “All of us can understand how emotions play with our actions. All of us can understand the base emotions of love, jealousy and rage.” Maybe, but it all goes south when the photographs hacked into crude heart shapes wind up taped on somebody’s mirror. The no-man’s-land between jealous cell phone espionage and boiled bunnies is a rough hike, but still somehow an enticing one.

One of the mysteries of the Alexander murder is how two people could continue to engage in a relationship adorned with so many blinking neon DANGER signs. Texts between them bounced all over the map, from sexytown to angryville (he called her a sociopath, she labeled him “evil”), but at no point was either able to fully disengage. Maybe the most shocking detail from both the factual and quasi-fictional accounts is the fact that Arias took pornographic photos of herself with Alexander before murdering him, and then continued snapping away in the moments directly before and after the crime.

The murder itself is reenacted in a grisly style, and it’s loooong. Whether this is just tastelessness or some kind of commentary on the detail and length of the trial itself is up for debate. It’s certainly insensitive in some regards, but the media coverage had it beat far in advance. Maybe it’s fitting that something that had become such a spectacle found its home on Lifetime, a place where your shameful domestic nightmares toss restlessly in the dryer. Art takes time and thought. Mental illness, murder, and tumultuous relationships are heavy. And yet someone has to do something with the ceaseless thumping bass of information that demands to be siphoned through each day, because some things demand discussion, and our discussions now take place in gossipy real time. If that’s the order that needs filling, the network does it well. The Lifetime movie factory, like our social conversations, is one step beyond free association, a race to see whose imagination is quickest at sketching some sequined version of a half-truth. Lifetime placed first in this heat, and because we were very hungry, we ate the whole thing. Ten minutes later, we’ll be starving again. Don’t worry. It’s temporary.