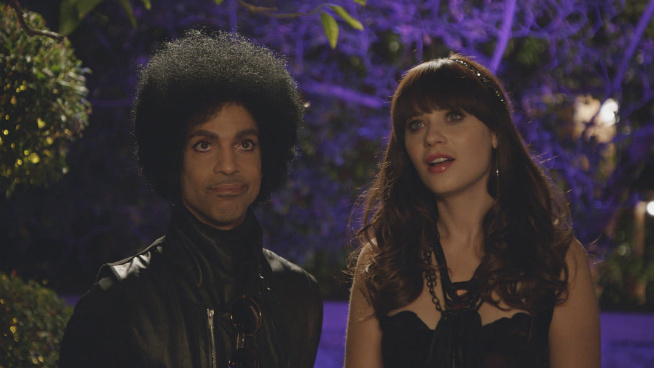 When Prince popped up on New Girl after the Super Bowl last month, consensus reaction was generally warm and positive. And rightly so! He was low-key, charming, and he looked fantastic; also, the setup of the NG crew crashing his party allowed the cameo to almost make some actual real-world sense. (Besides, for me personally, New Girl’s greatest sins as far as “destruction of suspension of disbelief” goes come whenever a Ford Fusion enters the picture. Those wacky struggling-with-life-commitment friends sure do love their Ford Fusions!) But now, the whole Purple One/New Girl nexus has taken a serious turn. Turns out, the track Zooey Deschanel guests on at the end of the episode is real, and it is here, now, in our nonfictional universe. That’s right: Prince. Jessica Day. REAL MUSIC. Oh, what have we wrought.

In which we learn that YG’s drug-fueled carousing is not simple, mindless joy-having, but some kind of search for catharsis — or, perhaps, a futile quest to pulverize one’s demons with chemical-fueled mind-crushing nihilism. See, he’s going through some things — that’s why he really be drinking. A good lesson here for us all: Therapy is super expensive; use that money to throw yourself a rager instead.

For the first time since 2009’s underrated Phrazes for the Young, lead Strokesman Julian is back on his solo grind: A solo album (co-credited to new backup act the Voidz) will be out this year. And last week, he was kind enough to premiere new material — only, it came via shaky fan-shot YouTube clips from unannounced shows. Which means that by the time you read this, the above link to “Ego” may well be gone. Safe to say, it behooves you to venture into the deep web and pluck it out for yourself. Because what the world needs now is Julian Casablancas.

DJ Snake & Lil Jon, “Turn Down for What”

“Turn Down for What” has become something of an anthem for the EDM generation; now, it’s got an appropriately filthy video. You really have to hand it to Daniels, the directing duo behind this thing. It would have been easy enough to make your run-of-the-mill wacky fast-cut WTF-a-thon, but they want further. The manic dancing man at the center of the action — who crashes, uninvited, into people’s homes, crotch first, and melts cop faces — is a legitimate deviant. When he enters a young lady’s apartment, the terror on her face tells us this is nothing short of a home invasion. The music eventually converts her to his cause, of course, as it must, but it’s not all bright and happy: It’s sweaty and grimy and a little bit sad, and it is — like the drug trip Daniels is apparently attempting to reflect, from the inside out and the outside in at the same time — not completely within her control. The clip also nails a little signifier of American poverty: those giant stacks of paper towels, bought in bulk at a discount megastore, sitting out on the counter, because there’s no room for storage in this cramped apartment. In conclusion: I was not expecting to enjoy the video for “Turn Down for What” this much!

Fear of Men, “Outrun Me”

You packing up the Volvo and leaving town today? Finally saying good-bye to a lover who was never strong or kind enough for you? And you’re not actually sad about it oh no no no but, in fact, cherishing every last ounce of imminent, heart-swelling possibility? OK, cool. Here’s a nicely dreamy joint to put on as you back out the driveway.

Boots is the stage name of Jordy Asher, a Miami-based producer and songwriter who got Internet-famous when Beyoncé plucked him out of anonymity and into her studio for her self-titled album sessions. (Explains Bey: “Boots [is] a new producer that I completely respect. He plays every instrument. He is a lyricist. He is an innovator, and I’m so proud to work with him.”) And now that he’s got your attention — would you care for a Weeknd-y semi-creepy late-night jam?

Converse’s Three Artists, One Song series continues to out-random itself. This time, it’s Frankie, Dip Dip, and sort of the Clash, although it’s definitely Mr. Ocean who steals the show. Between this and telling Chipotle to “fuck off” via check memo, our dude is basically having the best! week! ever! OK, but let’s get serious: Can we get some news on a Channel Orange follow-up? Please?

Supermarket shopping list, by way of drug anthem: “Girl on my phone / What’s the matter? / Going hard, just ran out of Arm & Hammer / she like ‘Bae, I’m at the sto’ what you want’ / You should know / Sandwich bags and Arm & Hammer!”

Foxx is a Lil’ Kim protege, and certainly comes to us in the delightfully aggressive mold of her benefactor. More important, though: Let’s talk about Chubbie Baby! This is not just a guy with the world’s greatest rap name; this is also a guy who, at least at one point, was being identified in some corners of the Internet as LeBron’s agent for party promotions. Renaissance man, man.

Yes. OF COURSE the new Perfect Pussy album is streaming at NPR. Now go listen, before you have to hear about it from your parents.

Stars: They’re Nothing Like You, So Just Stop Talking to Them