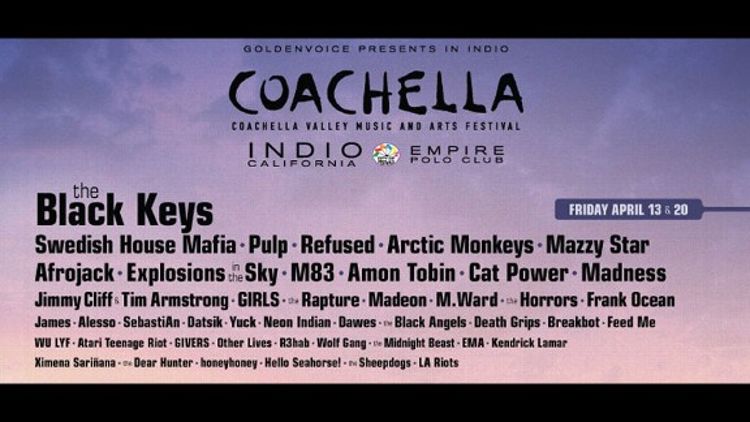 I have always been intrigued by the art and/or consumer science of festival flyer design. The festival flyer is not just a one-dimensional announcement simply announcing, “These bands are playing our music festival.” It is an important marketing tool to brand the festival experience and display artistic diversity across the festival lineup. As genres like ‘indie’ and ‘electro’ begin to fractal into chillwave, dubstep, and other made-up words, having a wide range of names that are strategically positioned on a flyer can change the entire consumer perception of a festival. Even if all of the wristbands are going to sell out no matter what.

One day we’ll look back at festival flyers like they are important historical artifacts that represent the intersection of music and culture. Just kidding–old flyers will just be forgotten .jpg files, chilling in internet eternity in the same digital graveyard as MySpace profiles. It is more important to analyze a new flyer when it is released in order to try to understand the current hierarchy of buzz.

I have decided to break down this year’s Coachella flyer to try to understand the purpose of each tier of artists. The flyer is broken down into three days, and on each day, there are seven lines, except on Saturday where there are eight lines (but the bottom two lines on Saturday appear to be the same size).

Notable Bands: Black Keys, Radiohead, Dr. Dre and Snoop Dogg
Every year, one band has to ‘graduate’ into headlining status, representing ‘the little indie band that could.’ This year it’s the Black Keys, providing another ‘indie has finally arrived’ landmark for people who don’t think indie is already integrated into mainstream culture. Radiohead and the rappers represent marketable brand names that resonate with consumers. It’s safer to go with a premium legacy brand than it is to ‘jump the shark’ and promote a band to headliner status based on a recent hype bubble which could burst before the band even plays. Most festivals have to be careful not to completely ruin their brand by putting a lamestream band like Nickelback or artist like Justin Bieber on as their headliner.

Notable Bands: David Guetta, Justice, Kaskade, At The Drive-In, Pulp, Bon Iver, The Shins
The major purpose of second tier acts on this year’s Coachella flyer is to send the message, “Yes, we have lots of electro acts, AND we have some bands that are reuniting, but they are not marketable enough to serve as a tier one headlining band.” After Deadmau5 headlined Lollapalooza, the electronic music niche has been verified as a viable headlining solution, but having an electro-headliner in Southern California might attract too many ravers, alienating cool dads who just want to watch some guitar rock. The gimmick of ‘reuniting for Coachella’ has created marketing synergies for both Pulp and At The Drive In, but both are ‘too niche’ to be a true headliner. It is also nice to see Bon Iver and The Shins ‘ranking’ high for NPR and cool dad markets.

Notable Bands: Feist, Cat Power, M83, Explosions in the Sky, Jeff Magnum, Beirut, The Weeknd, Girl Talk
Every one has heard of these bands, so they just represent the expectation of premium band brands across niches to play at festivals. Every one has probably already made up their mind about these bands, so there is no new territory to explore by seeing them live. Although he probably still draws college bros very well, who is still excited to see Girl Talk?

Tier 4: Is this the apex of your career?

Notable Bands: The Rapture, M. Ward, Girls, St. Vincent, Santigold, Nero
The Rapture are one of the buzzworthiest bands of all time (after adjusting for buzz inflation), so it is always interesting to think about how they are now some ‘middle of the pack’ indie band. While some bands like Girls could see Tier 4 placement as an upward trajectory, ending up in the fourth tier might mean that your buzzband career has plateaued.

Tier 5: On the Buzz Bubble

Notable Bands: Neon Indian, Azealia Banks, A$AP Rocky, Real Estate, araabMUZIK, Zedd
The majority of these bands have the potential to work their way towards headlining, or at least Tier 2 status. However, this might be judging them based on excessive blog exposure, and they will never sell albums or attract big crowds. Tier 5 is probably the ‘coolest’ tier based on upside.

Notable Bands: Childish Gambino, EMA, Black Lips, the Big Pink
Listen, I hear your band gets a lot of buzz on the internet, but we are not certain that your band actually has a reach that will inspire consumers to purchase tickets. In the case of Childish Gambino, he might be ‘hidden’ because he is not considered a ‘real artist’ by many music critics. Only people who have enough time to watch Community would spend enough time looking at the flyer to find Donald Glover’s rap project.

Tier 7: You should just be happy to be here.

Bands: No one that you know.
Did you know that most music festivals start as early as 11 am, forcing the festival organizers to book bands on multiple stages for ‘the type of people who show up to a music festival at 11 am with a refillable bottle of water and a fanny pack filled with healthy snacks’? It seems like the extreme long tail of most festival lineups are a pretty random selection that isn’t even worth analyzing. This could be the defining moment of their career, or they could turn into the next Lady Gaga, who played a crappy set to no one at Lollapalooza 2007.

Previously:
Portlandia and Great Moments in Hipster Bashing
What Howard Stern is Doing on America’s Got Talent
Lasting Images From the NBA Lockout
How Is Rihanna Doing This?
Consuming Sports in Our Crowded Meme Economy

The Dragon Tattoo Credit Sequence: Watch It Again, For The First Time