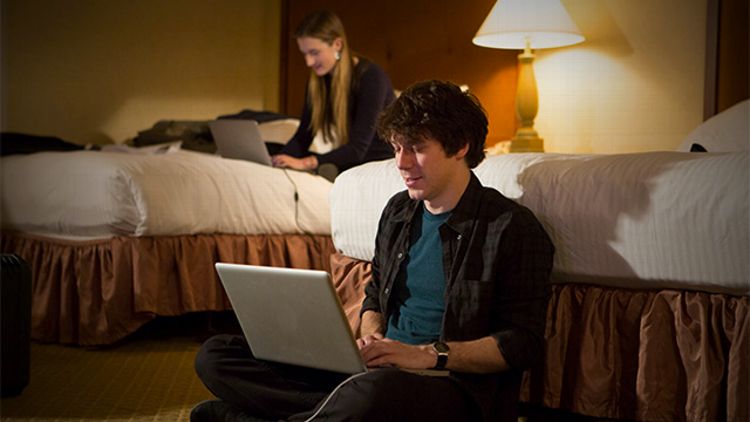 Sometimes this show makes me feel dumb. Not because of any lack of education (I went to UCLA) or basic understanding of the hot-button 2011 issues that ACN is facing, but because I can’t listen fast enough. The moment the conversation turns to anything other than love and emotions, everyone goes all Micro Machines on each other and I am neurologically incapable of processing all the information. I may start turning on the subtitles, though I’m sure they go by as quickly and unintelligibly as the stock ticker on Moneyskirt Corner With Sloan Sabbith. In any case, let it be known that I’m not sure which battalion took Maggie to which village in Africa for her horrific, bloody journey of self-discovery this week, but I do know about Love and Emotions, and this episode was overflowing with them.

“I’m not smug. I’m having a crisis of confidence.” —Will McAvoy

Of all the people I predicted would succumb to the unstoppable plague sweeping The Newsroom’s New York City, whose victims become extremely fascinated with and invested in Will McAvoy and MacKenzie McHale’s relationship, not once did I see it happening to Occupy Shelly. After her disastrous News Night interview (how many times will Will’s show just turn into a fugue state of relentless Only God Forgives–esque face-beatings before we are forced to accept that Will McAvoy is, um, maybe kind of a dick who doesn’t deserve love or happiness?), her fixation on Will began in earnest, like it has for so many women who’ve taken an intellectual whipping from him, and she would not rest until she received a personal apology from him. With each visitation from various not-Wills she briefly entertained before shooing away, she seemed to adopt more of Will’s stubborn, credential-reciting bluster for herself (“I teach college!” has even less of a ring to it than “I went to Vassar”; see below), like when you were in sixth grade and your crush wore an Adidas hoodie and you subsequently begged your mom for the same Adidas hoodie, or maybe just the same one in pink. But it was their conversation in the hallway at NYU, after Professor Wexler completely ditched the classroom of young people she was being paid to educate the moment she heard Will’s voice, that put this pairing at the top of the list this week. She didn’t get the apology she necessarily wanted, but she did get a juicy look into the private life of Will McAvoy, and that’d make just about anybody’s day.

“I’m the rebound. And I went to Vassar.” —Hallie Shea/Casting breakdown for Hallie Shea

Jim and Hallie are actually perfect for each other, so it’s too bad this isn’t going to last very long. They’re both the kind of people who (a) desperately need to feel smart at all times, and (b) only know how to make themselves feel smart by eye rolling and complaining about things. There is a fine line between flirtatious banter and just being completely mean and insufferable, and I don’t know if either Jim or Hallie is familiar with the difference. I’m hard pressed to remember any point at which Hallie looked as though she wanted to do anything other than murder Jim in his sleep, but Jim luckily read her rage for what it truly was (and really, what any woman’s rage is, i.e., she wanna get laiiiid) and soon enough there they were, sucking face by the shimmering waters of the Radisson pool. Hallie is a well-educated woman with a crappy job (She went to … OK, OK, I’ll stop), and she has to know that nailing a senior producer for ACN is a major date-up. Plus, we also found out this week that her boss is a misogynistic asshole who makes inappropriate, sexist comments to her and appears to have some anger issues, which, I mean, can you imagine how hard that would be?

“I’ll never let go,” Sloan whispered softly to the tanking stock, managing to combine references to stories from 2011, 1997, and 1912 all in one line.

OVER: Rebecca Halliday & The Dutch & Jim Harper & The Name Evan

First person to compile a chronological listing of every declaration of irrational hatred for a seemingly random thing this season wins the disillusionment you feel when you realize that Aaron Sorkin probably doesn’t write second drafts for The Newsroom. (Don & Book Agents is a freebie.)

In a show full of emo messes who only pour themselves into their work to get their minds off their relationship problems, Neal and Jerry are the two weirdos who actually just really care about journalism. And as the Occupy and Genoa stories started to converge, so did Neal and Jerry. Physically.

You may call this speculative. You may call this premature. But I’d never seen Neal so happy before that moment when he realized that he and Jerry could be — no, were, a team. And I doubt we’ve ever seen Jerry even touch another human being, so everyone got to some kind of first base last night, at least spiritually.

A Weekend at Lollapalooza 2013 With Trent Reznor, a Million Suburban Teenagers, and a Buried Bottle of Vodka