A Weekend at Lollapalooza 2013 With Trent Reznor, a Million Suburban Teenagers, and a Buried Bottle of Vodka 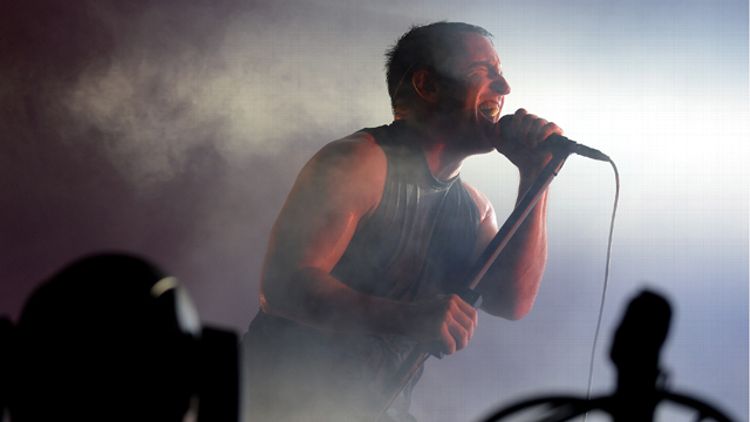 There are some obvious benefits to being a seven-year veteran of a particular musical festival. Knowing where to bury a soda bottle full of liquor five days in advance is one that’s not so obvious.

We were inside the Lollapalooza gates for about five minutes on Friday when my enterprising friend made the move toward his recently buried treasure. It wasn’t hard to find. Sticking out from the ground was a small piece of the grocery bag he’d used to wrap the bottle, and about 15 seconds later, he was back, the mission a success. Honestly, it was a little bit of a letdown.

It’s safe to say that by now we know the lay of the land at Lollapalooza. Including this past weekend, the same group of us has taken to Grant Park every summer since our senior year of high school. No matter the lineup, it has been a weekend we carve out every year, a chance for us all to get back together no matter where we are or what we’ve been doing. We’ve said for a couple years now that our festival-going days are coming to a close, but each year we’ve made our way back. When the lineup was released this year, though, it made for a natural endpoint to our annual excursion.

My first Lollapalooza was in 2006, the second year of the festival’s run in Chicago’s Grant Park. As teenagers lacking both money and a place to stay, we could only manage to make it for one day. It was the following year that the Lolla trip became an annual three-day commitment. There have been plenty of highlights in that stretch (Daft Punk in 2007, Foo Fighters playing in a downpour in 2011), but for my friends and me, nothing comes close to 2008. That installment featured a headlining trio of Radiohead on Friday night, Rage Against the Machine on Saturday, and Nine Inch Nails on Sunday. For those who were there, Saturday’s show was memorable for Zack de la Rocha stopping the band’s set more than once because the crowd had become too unruly. People were packed in so tight that jumping along with everyone else wasn’t really a choice. It was legitimately terrifying. And I lost a shoe.

Mostly, though, that weekend was about Nine Inch Nails. My friends and I had gotten into NIN later in high school, just as the With Teeth tour was coming to a close. We spent an entire summer listening to little other than the entire Trent Reznor catalogue, and by the end of it, we were officially hooked. The Lollapalooza show was set to be our first live Nine Inch Nails experience as a group, and it did not disappoint. The band’s Lights in the Sky tour was visually unlike any other live music production I’ve ever seen, and set against the Chicago skyline, it was more than what we’d even hoped for.

Near the end of the set, just before playing “Hurt,” Reznor stepped to the microphone. “Seventeen summers ago, I got a call from Perry Farrell to be a part of the first Lollapalooza,” he said to cheers. “We were just kids from Cleveland who had no idea what we were doing. It was a flattering opportunity to play with some cool bands. It completely blows my mind that I’m still alive, 17 years later, and that I’m on this stage in front of a full house of appreciative people.” Reznor thanked his band, thanked the crowd, and then said something that has stuck with me since. “This a song I wrote at a very dark time. I wrote it for myself. And then I gave it to a friend.”

It felt like the end of something, and shortly after, we’d find out that it was. Reznor announced the following year that Nine Inch Nails was “going away for a while,” and with that news, my friends and I spent much of 2009 getting to as many shows as we could. When talking about what would bring us back to Lollapalooza when we hit our late 20s, a revived Nine Inch Nails was always first on the list. That, as much as anything, was a reason I thought this year was a good note on which to go out.

In many ways, Friday’s show was much like that one in 2008. Much had been made about the visuals in the week leading up to the tour, and from the start, they were varied and stunning enough to justify that level of interest. Things began with Reznor walking out front alone, with each band member slowly joining. For the first several songs, which were mostly off the as-yet-unreleased new album, the visuals consisted of little else but shadows projected onto a set of screens. From there, both the images and the set list expanded. Live staples like “Terrible Lie” were accompanied by a collection of mobile, flashing backdrops, and the quiet “What If We Could,” a song from the Girl From the Dragon Tattoo soundtrack, came with a gentle white background and a cello. “You can feel the snow,” my friend said, water bottle still in hand.

Even non-NIN fans often come away from their live shows in awe, partly because the way Reznor reimagines his music for that setting is remarkable, but mostly because they’re a force built mostly on his energy. As someone who saw six shows in the year before Reznor pressed paused on Nine Inch Nails, it was easy to understand why he wanted some time away. Each time out, he gives you everything. Friday was more of the same, but as we made our way out of Grant Park, sweaty and hoarse, one of the first things we all mentioned was how little interaction there’d been between Reznor and the crowd. There were no speeches this time around, and in all, I think I counted fewer than 10 words. I don’t even think he said the name of the band. For nearly two hours it was nothing but a wave of music. If 2008 felt like the end of something, this felt like a beginning.

Aside from the convenience and the backdrop, what sets Lollapalooza apart from other festivals is its expanse. It’s about a mile from one end of the festival to the other, and with the crowds, the walk between the two main stages can take almost half an hour. Combined with the nonexistent cell service, it makes planning a necessary part of the day.

Saturday was mostly spent at the south end of the park, where Local Natives and the National were playing the main stage. The former has been a fixture on the festival circuit all year, and I’m not sure I saw a better set at Coachella than the one they played at sundown on Friday. Theirs was a fitting sound for the type of afternoon it was. Chicago in August usually means 95 degrees and a mugginess that’s unbearable, but Saturday afternoon was a cloudless 80-degree day just mild enough that I’m guessing the National’s Matt Berninger wasn’t that miserable (from the heat, anyway) when he took the stage in a black suit.

Being from Chicago, I forget the pull of Lollapalooza for people from elsewhere in the Midwest. To either side of me during the National were a married couple, each 57 years old, from Ann Arbor, and a 20-year-old woman from Grand Rapids. It was hard to say who was having a better time.

The National’s set was a collection from each of their offerings from Alligator on, including Berninger’s traditional trip into the crowd for the scream-laden “Mr. November.” I was holding out hope for “All the Wine,” which they’d played once on the current tour, but considering Berninger spent a good portion of the show with a bottle in his hand — even dropping it at one point — the song might’ve been redundant.

I hadn’t noticed the kids until Sunday. It could’ve been my music choices over the first two days, or that by day three I was considerably tired and sounded like I’d eaten nothing but Marlboros all weekend, leaving me vulnerable to annoyance — but by noon on Sunday, they were everywhere.

The train station to and from the Chicago suburbs is walking distance to Grant Park, and when I agreed to pick someone up there Sunday afternoon, I hadn’t thought about the crowd that awaited me. The festival’s early end time (10 p.m.) means that day trips to the city are easy to pull off, and it turns Saturday and Sunday into an attractive outing for teenagers who don’t need to worry about driver’s licenses or hotel rooms. Filing from the trains was a screeching, neon-clad mass. I instantly resented their excitement.

Our group’s positioning throughout the day didn’t help matters. Perry’s — which everyone still calls a tent, even though it has been a stage comparable to the main ones for a couple years now — is home to the EDM acts; it’s also where most of the teenage crowd congregates. Before the Skrillex–Boys Noize combo Dog Blood, I was waiting in line for the bathroom when I made the serious mistake of engaging the person in front of me in conversation. He was 16, which was actually surprising, considering his child’s medium Joakim Noah jersey.

By 9:30 I’d had enough. The appeal of live music had been surpassed by the appeal of food and a couch. People, sweatiness, and mud were no longer on my to-do list. As I made my way back through the crowd, I noticed the clumps of teenagers still dancing like they had all day. When I left the grounds, the pounding of the music gone, my other senses picked up. My feet were throbbing, and soreness pulsed in my legs. People cheered as they made their way down State Street. It was only a few blocks to the L, but for a second, I considered hopping into a cab. When I got back to my friend’s apartment, everyone was curled up on the couch, watching the re-airing of the night’s Newsroom. After changing clothes and grabbing something to eat, I joined them. This was much better.

Filed Under: The National, Trent Reznor, We Went there

See all The National

The Kardashiad, Part 21: We're Eating Pie in Our Bathing Suits