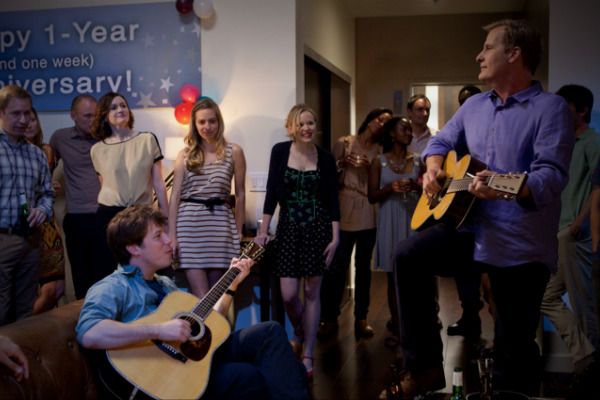 After a bit of Will/Mac overload last week, the youngs are taking over the ‘Shipping Newsroom leaderboard in a big way. Don continues his journey of redemption this week by flying (ugh, I’m sorry) in the face of federal regulations and a very uptight Julie Delpy doppelganger to report the news, even if his only audience is the cabin of their mysteriously business-class-free aircraft (United Airlines: not elitists, it turns out!). But if Bin Laden’s death was the top story, the lead-in was Elliot and Don’s gratuitously in-depth investigative report on the state of the latter’s relationship with Maggie, and now those strangers on a plane are fully briefed on the two most generation-defining stories of 2011. And while they seemed pleased overall with the efforts of Seal Team Six that evening, they are so totally over Don & Maggie’s on-again-off-again drama. SO ARE WE.

Well. LOTS to unpack here. First, should I be treating Cool Will as a separate character from Will McAvoy? Because Cool Will (with the aid of the two pot cookies and Vicodin that only Cool Will would indulge in) was, dare I say it, kind of cool — in a cool-dad-who-lets-you-smoke-weed-and-play-Guitar-Hero kind of way. With his speechifying chemically impaired for the evening, his verbosity was nearly down to the level of a non-Sorkinian mortal being, and he was still able to deliver the news competently without falling into too many lame stoner jokes along the way. P.S., between last week’s laundry list of antidepressants and anxiety meds, and this week’s reveal that he takes Vicodin for the chronic pain leftover from his star high school athlete fastball days, Will McAvoy is turning out to be quite the little pill-popper. Now, all this is not to say that drugs make you cool, just that opiates and THC made Will McAvoy cool, and heaven knows we are not all Will McAvoy. (To wit: “My body has the physical tolerance of 10 men. Doctors have called me a medical marvel.” I’d take him at his word!)

But I’m getting ahead of myself. Just as the OG Kush was beginning to make its way through Cool Will’s digestive tract, there was a brief bit of musical magic between him and Jim, as the elder statesman and the noob sweetly harmonized to Jonathan Edwards’s protest song “Sunshine”:

How much does it cost? I’ll buy it.
The time is all we’ve lost. I’ll try it.
He can’t even run his own life,
I’ll be damned if he’ll run mine

WHO IS “HE”? WHO’S TRYING TO RUN WHOSE LIFE? This is SO reminiscent of the musical angst-triangle “In My Life” from Les Misérables (I think Charlie might be the Cosette here?), which is such a good thing because this episode was perilously devoid of Broadway references, and I’ll take whatever I can get.

I try not to play favorites here — just reporting the ‘ships — but these two are officially at the top of my personal couples list. If only they would have kept the matchy-matchy slings and black eyes longer.

Don: The biggest story in a generation and I’m a spectator.
Elliot: You’re not a spectator. We are locked on a plane and we still have it put together, that’s pretty good.
Don: What is this compulsion you have to look on the bright side? I can never count on you to be Jewish.
Elliot: If it helps, we should probably be concerned about violent retaliation.
Don: That does help, man. Thanks.

I love Don & Elliot (& Sloan!) On A Plane. They’re the three best characters, and I would watch that show every week.

Neal and his non-girlfriend are apparently still together, a surprising five months after he debuted her at the ACN New Year’s party, so I decided to upgrade this relationship to Bigfoot status. And even though she and Lisa were relegated to the ACN Girlfriends Corner while Maggie and the boys sat around and talked shit about Geraldo, it seemed like we were starting to get to know her as more than Tom Haverford’s ex-girlfriend. She’s a hot stoner, she can play Guitar Hero blindfolded, and she follows The Rock on Twitter. It’s a good start! But then the Osama news became official, and Neal and Kaylee exchanged solemn glances, and we started to get some next-level background info. It turns out her dad died in the attacks, and she’s got some mixed emotions, so Jim and Neal watch her cry for a little bit then I guess just leave her out on the terrace to dry out. Better keep an eye on her, Neal. No emotionally distraught woman on the ACN terrace is safe from Jim and his military-grade breathing exercises.

The L-bomb is an important step in any ‘ship, except nobody takes these two seriously so I’m not going to waste my time here. Just as Lisa should not try to make “It’s a gas” happen, Jim should probably stop trying to make Jimisa/Lim happen. It’s never going to happen.

Hottest speechifying: Lisa: “It’s too bad the Seals are in Pakistan tonight, because they’d be getting some MAD ASS if they were in New York City [awkward, strained laughter].” Fashion people. You can’t take them anywhere. Again, it’s never going to happen.

I’m just going to let YouTube take over from here.

True Blood Season 5, Episode 9: 'Everybody Wants to Rule the World'