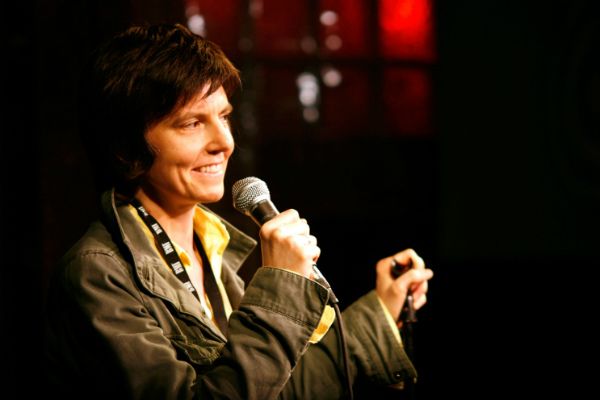 Here’s Louis C.K., tweeting about Tig Notaro’s stand-up comedy set at L.A. club Largo on Saturday night: “[I]n 27 years doing this, I’ve seen a handful of truly great, masterful standup sets. One was Tig Notaro last night at Largo.” What exactly went down? Notaro, a 41-year-old comedy veteran enjoying a recent upswing in her career, explained to the audience she had been diagnosed with breast cancer, and then went on to do some tear-inducing comedy about it. Kira Hesser, a comedian and writer who was in the audience, captured the scene in a Tumblr post:

It began when Ed Helms welcomed her to the stage and she crossed over, took the microphone, and said “Thank you, thank you, I have cancer, thank you, I have cancer, really, thank you.” Applause gave way to reticent laughter as she explained how she had planned a set about bees flying alongside her car on the 405, but that she couldn’t possibly do her “silly jokes” when all this was going on. And that’s when she told us that 3 days ago, she was diagnosed with breast cancer, in both breasts. But she didn’t just have cancer. She went on to explain that in some manic twist of fate, while her career is at an all-time high — she is moving to New York to work on Amy Schumer’s new television show, she was on This American Life — concurrently, all these terrible circumstances have befallen her over the past 3 months: pneumonia made way for a debilitating bacterial infection in her digestive tract for which she was hospitalized and lost 30 pounds off of her already small frame, days after being released from the hospital, her young mother died suddenly and tragically (fell, hit her head, died), then she and her girlfriend broke up, and then, now, cancer. In both breasts.

You should definitely read the rest of Hesser’s post here. As Vulture points out, C.K. wasn’t the only one to heap on the praise when all was said and done: Bill Burr, who followed Notaro, later tweeted, “Just saw Tig Notaro at Largo … made me feel like I was an open miker. Absolute genius!” Helms added, “Tig Notaro just blew my mind at Largo. One of the most amazing stand-up sets I’ve ever seen.”

Random stand-up sets are not, of course, usually the focus of such unstinting praise. Which is what makes this particularly cool. Notaro’s set, apparently, was so good, so bold, and so moving that it’s already being recognized as one of the more unique sets in the history! Of stand-up comedy! (We can count on Louis as an unofficial historian of the form, right?) But other than C.K. and Bill Burr and Ed Helms and Kira Hesser and that one guy yelling and whoever else was in the building that night, we assume that no one’s going to get to see it. When does that ever happen anymore? Eventually, some grainy cell phone footage might pop up. And if it does, I’m going to try my best to not watch it. Certainly Notaro knew that what she was saying would get beyond her immediate audience. That doesn’t mean she was offering her diagnosis for anyone other than the people in the room. The reason the audience reaction was so intense is because Notaro’s approach was so intensely personal. Having that translated through YouTube blunts things. I’d rather keep it in mind as is — a great, brave comedy moment, being shared, almost like a rumor, from person to person. And here’s to wishing Tig Notaro the best of luck going forward.