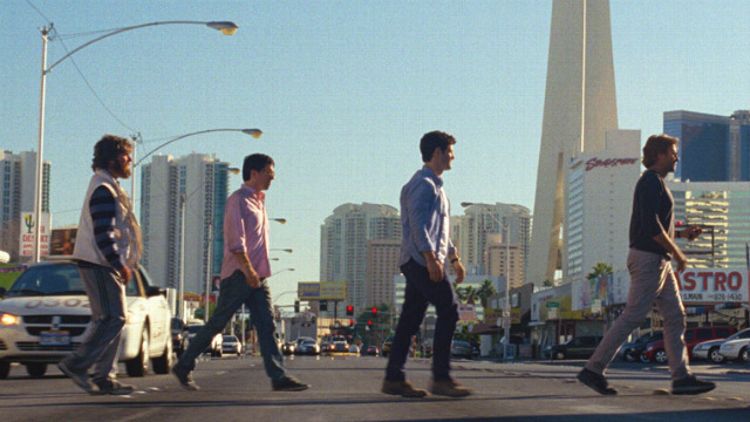 In your younger years, you enjoyed The Hangover uncomplicatedly. Then you ended up rewatching it at a friend’s on a slow night and realizing the first joke of the franchise is “Don’t text me, it’s gay.” Then a new Hangover arrived, same as the old Hangover, only instead of being hostile just to women and married people and old people and gay people, it was especially racist and even more shame-making for anyone who happened to be American.

And now The Hangover Part III arrives, Roman numeral and all. IT ENDS, blare the advertisements insisting on epicness. Jesus, I hope so, part of you growls. Maybe it’ll close on a better note, whispers another part of you, the part that laughed a lot in the theater back in 2009. Both factions of your heart will need support before, and perhaps especially after, seeing this movie; these are the 12 steps you’ll work through while watching the dramatic, almost completely Mike Tyson–less conclusion to Todd Phillips’s trilogy. [Note: There will be spoilers. Be careful out there.]

1. We admit we are confused as to what kind of movie Todd Phillips is trying to make.

Why are we opening on a prison? Is this the beginning of a Hangover movie or a new Mission: Impossible? Where did all this seriousness come from? Is the new Hangover just a Scary Movie–style send-up of everything popular? Does there have to be a giraffe getting decapitated? Do we have to do the highway pileup, even if it reminds everyone of Final Destination 2? Do we have to do the rich-people home with a manboy son and an aloof father who is Jeffrey Tambor, when everyone is already thinking of Arrested Development?

Why is this so intensely elaborate and plotty? Why is this a heist movie? Why are Ed Helms and Bradley Cooper’s characters having a civilized dinner with their wives at a nice restaurant — did we miss the part where this was a series about adults who go out to dinner, not dudes who pretend to fuck tigers and pretend babies are jerking off and pretend monkeys are biting old monks’ dicks?

Why did Todd Phillips make the same mostly insipid movie twice, earning even more money the second time, then make a totally different insipid movie the third time? It’s like if George Lucas made Return of the Jedi an adaptation of Wuthering Heights instead of just making it the final Star Wars movie.

2. We come to feel the kind of discomfort felt when it’s clear Bradley Cooper is so much better than this.

It’s now an established fact that Bradley Cooper, the man my colleague Amos Barshad once dubbed “the guy who has sex with Michael Ian Black in Wet Hot American Summer,” can act. Silver Linings Playbook earned him an Oscar nod in a year when Daniel Day-Lewis and Denzel Washington were nominated. Cooper made a movie with Ryan Gosling and Blue Valentine director Derek Cianfrance. He’ll star in another David O. Russell movie soon, and he’s about to work with Spielberg. But he’s still here, Hangovering.

3. We decide to also acknowledge the particular discomfort we feel when low-hanging fruit is swung at with unrepentant vigor.

For the first two installments, The Hangover wisely maintained a noncommittal stance about the official mental state of Zach Galifianakis’s Allen. Getting specific, talking about medication and interventions, suddenly and explicitly makes it about laughing at a mentally ill person. Or maybe Todd Phillips is wagging his fraternity-ringed finger at the audience, shaming us for laughing at this troubled man all along. The latter is worse because Allen wasn’t this man all along. Sorry, Todd, old buddy — you actually can’t change the rules and make us feel silly for not playing the game right.

4. We admit we are worried.

Is this funny? If we hadn’t read that review about this being a comedy that forgot to be a comedy, would we feel differently? The theater is laughing at about two-thirds of the punchlines, although not too uproariously. IS THIS EVEN FUNNY? Have we forgotten what funny is?!

5. We accept the sudden, vague sense of being respected by this movie.

An influential studio exec must have at some point started spreading the faulty wisdom that you’re only as funny as your most recent pop culture reference to comedy directors, and it must’ve caught like wildfire. Sure, it’s funny to make a Matisyahu joke in 2007, when Knocked Up hits. It’s not as cool for that joke to be frozen in amber when we rewatch the film more than half a decade later. The Hangover handles its references with less of an eye toward the bleeding edge and more toward longevity. “Who Let the Dogs Out” will never not be at least a little funny. “MMMBop,” if it’s been completely buried two decades from now, will still be a fun, soothing song, the right tune for its scene. Being an Internet-Friendly Cool and Hip Comedy means winking at your audience, knowing what they think is hot at the moment (A$AP Rocky), rad forever (Black Sabbath’s “N.I.B.”), funny to pluck from the sands of time and remember at this moment (Tab cola), and worth a laugh forever (taking a selfie with a portrait of your dead father at a funeral, getting a quick snap of a friend dangling perilously off a skyscraper).

6. We are entirely stunned …

… as Allen, in a flashback to the moment he bought the roofies in the original Hangover, walks up to a drug dealer and casually calls him “n—-.” It’s not the franchise’s first time, and maybe you’ve gotta be brash to stand out in a comedy today, but … damn.

Chow does not have a cameo in this movie; he is the hub of this movie’s plot wheel. But who really cares about Chow? Who cares about any of these guys? I’m talking about actual caring. Yes, they’re OK to spend an hour and 40 minutes with from time to time. But the other movies deployed unimaginative yet relatable consequences like getting to a wedding on time. The only consequence in The Hangover Part III is the possibility that one wolf will get separated from the pack and end up dead or jailed. Wouldn’t they make it funny, though? Like, fuck it! Let ’em fall off that huge — oh, no? We have to care about them? Ugh …

8. We make a list of all the times we were terrified, and we put this moment close to the top:

The Wolfpack crosses the street in a shot made to resemble the Abbey Road album art, and we will never even know if Todd “Road Trip” Phillips actually believes he’s created a new Fab Four. What Phillips has created is a venue for Ken Jeong to display his genitals and for Ed Helms to be mutilated in various ways. Please don’t bring the Beatles into this.

9. We make amends with this movie in the form of temporary relief.

There’s that Reservoir Dogs shot. There’s the requisite Kanye West song, amplified by Phillips & Co. catching on and using the bit of Kanye’s “Dark Fantasy” that contains the word “hangover.” But the relief of seeing predictions come true is nothing compared to the relief we feel when we realize Phillips understands that using a Crazy Photo Credit Roll three times in a row would be hackish. So it’s not there! You did it, Todd Phillips!

10. Taking personal inventory, we discover a sudden, strong sense of being disrespected by this movie.

After all that advertising about Part III being the conclusion of the trilogy (does a trilogy not require an actual arc across all three films? What’s that in this case? “Allen is weird”? “Chow”?), Phillips and the Wolfpack aren’t for a second leaving without a direct hook for a fourth movie. IT ALLLLLL ENDS. MAYBE.

11. Sought through prayer and meditation, we achieve resignation.

Because even without the photo roll, of course there’s still going to be a gross-out, shock-value finish, and there’s still Chow’s dick.

12. Having had a Hollywood-comedy-oriented awakening throughout this process, we still manage to feel complete surprise.

Because no one is immune to making a giant emoji-style shock-face when Ed Helms appears topless with tits.

Cannes Interview: Nebraska's Will Forte on His Dramatic Shift and Why He Really Left SNL