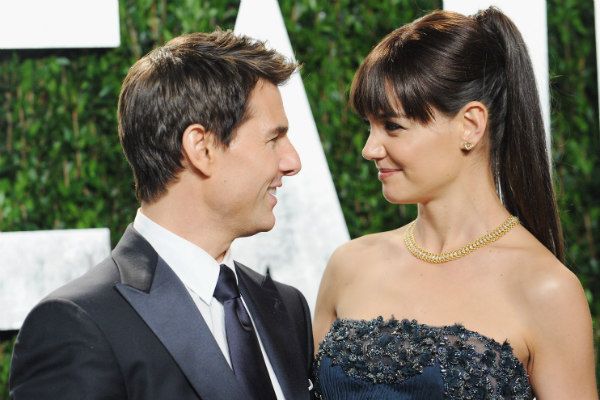 For years now, stories about The Church of Scientology vetting Tom Cruise’s ladies have floated around. The layman’s understanding is that, under the auspices of an audition in the next Cruise blockbuster, comely young actresses are brought in and gauged as to their interest in signing a contract to pretend to love the American treasure. This is all, of course, extremely creepy. But is any of it true? [Dramatic pause.] [Read on for harrowing reveals] [Dramatic pause.]

In a preview of a longer article from their October issue — What Katie Didn’t Know: Marriage, Scientology Style, by Maureen Orth — Vanity Fair offers some insight, via sources telling the story of Nazanin Boniandi, who was allegedly vetted by the Church before ultimately being given the heave-ho after a brief, but unsurprisingly intense, relationship with Cruise. Private Rockefeller rink ice skating sessions! Anti-red-hair bias! Lack of sex! Sushi dinners! The juicy bits, below:

Boniadi, an Iranian-born, London-raised actress and Scientologist, was selected and dated Cruise from November 2004 until January 2005. Initially she was told only that she had been selected for a very important mission. In a month-long preparation … she was audited every day, a process in which she told a high-ranking Scientology official her innermost secrets and every detail of her sex life. Boniadi allegedly was told to lose her braces, her red highlights, and her boyfriend. [S]he was shown confidential auditing files of her boyfriend to expedite a breakup …

[I]n November 2004 Boniadi was flown to New York, where she met Cruise … for their first date Cruise and Boniadi went to dinner at Nobu with an entourage of Scientology aides, then to the skating rink at Rockefeller Center, which was closed to the public especially for them. The two spent that first night together but … they did not have sex. At the Trump Tower, where Cruise and the entourage had rented an entire floor, Cruise purportedly told Boniadi, “I’ve never felt this way before” … By the second month Boniadi was more and more often found wanting … anything she said or did that Cruise found fault with he immediately reported to a member of the Scientology staff.

Eventually, Boniadi fell out of Cruise’s favor altogether and was removed from his inner circle and dropped off at a Scientology center in Florida. There, Bonaidi “broke down and told [a friend] about her relationship with Cruise, which she had been forbidden to do. According to the knowledgeable source, the friend reported her. Boniadi’s punishment was to scrub toilets with a toothbrush, clean bathroom tiles with acid, and dig ditches in the middle of the night.” Boniadi has since cut ties with Scientology.

Well then! First: Denials have already been passed down — “The Church does not punish people, especially in [that] manner,” says a spokesperson. And you could see where this could all have possibly been misconstrued. Maybe Boniadi is a bitter ex-girlfriend with an ax to grind? Maybe The Church vetting Cruise’s women isn’t — considering his high-profile stature and his deep personal connection to the organization — as crazy as it first sounds? But alongside pieces like Lawrence Wright’s Paul Haggis vs. The Church of Scientology and a steady torrent of allegations from ex-Scientologists, it’s increasingly difficult to not see Cruise’s alleged dating techniques as deeply, deeply weird. Whatever happened to seafood dinners and boardwalk strolls, huh? Maybe a glass of Merlot and a quick game of Ouija? Bumper cars and long conversations about which episode of Friday Night Lights is best for having a good cry?

(Also: “The Church does not punish people, especially in [that] manner.” Especially in that manner? Do they really not know how secretly evil that wording sounds?!)

By the way, Paul Thomas Anderson’s winky-wink Scientology exploration The Master, set back in the ’50s, won’t touch on any of this. But here is your requisite reminder that that movie exists, and is coming soon!