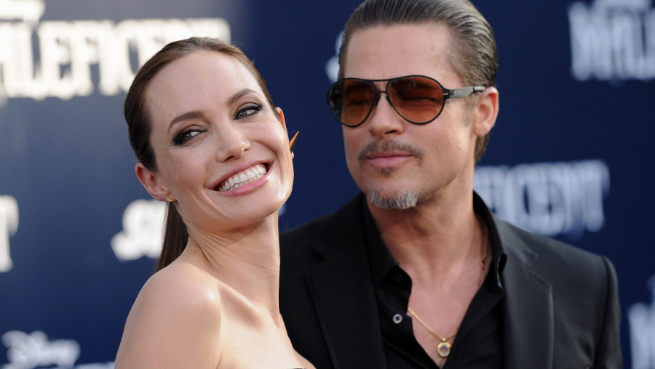 Celebrity Wedding of the Week: Angelina Jolie and Brad Pitt

Whoa! Angelina Jolie and Brad Pitt got married over the weekend in France. There are few details available, and other than their six kids, it’s unclear who attended. The most logical question is, “Why now?” Perhaps they were unhappy with this headline: “Angelina Jolie, Brad Pitt Will Shoot ‘Crazy Sex Scenes’ Together in Upcoming Film.” There’s no better way to reclaim the narrative than by announcing a highly anticipated wedding. They’re off to Malta now to begin production on the sexy movie, which Jolie is directing. Mazel tov to the happy couple!

Celebrity civil lawsuits yield such delicious fruit. You may recall Kanye West’s altercation with a photographer at LAX last year. That paparazzo is now suing Kanye, and thanks to a deposition, we just learned quite a bit more about the rapper and his family history. Kanye explains:

“My father was a paparazzo himself. My father was a medical illustrator, a Black Panther, a Christian marriage counselor … Sometimes I get in the car with the paparazzi. Paparazzi help me to park … The paparazzi watch my car and makes sure that cops don’t give me tickets. There are some nice guys out here trying to just feed their family. And then there’s a​-​-​-​-​-​-​- like the guy you’re representing.”

What’s more shocking — that Kanye’s father was once a paparazzo or that he accepts assistance when parking? Anyone who has ever attempted to parallel park only to royally mess up on the first try knows how frustrating unsolicited guidance is. The same perjury rules apply to testimony in depositions, so Kanye must be telling the truth. I just can’t see him allowing a stranger to tell him when to cut the wheel.

After you’ve looked at all the fashions from an award show, the next thing to study is the body language. Or, in the case of Miley Cyrus, the conspicuously mouthed words. You can very clearly see her mouthing “asshole” at Ed Sheeran as he walked to the stage to pick up his Moonman for Best Male Video. Sheeran refused to beef up, though. In an interview on Ryan Seacrest’s morning show, he claimed to think Miley is a “fantastic” artist. The fact is, though, Ed Sheeran is clearly aligned with Taylor Swift, who is pretty much anathema to the Miley experience.

But for every feud, there’s also a new couple. Fred Armisen and Natasha Lyonne may be dating! According to People’s account of the Netflix Emmy-after party, the two were side-by-side as she mingled with the rest of the Orange Is the New Black cast. They were also spotted together at various parties before the Emmys. This seems fairly random, but Lyonne is pals with Armisen’s Portlandia counterpart, Carrie Brownstein. Good luck to them!

The rumormongers of Blind Gossip threw out a few other morsels this week. One TV actress went stag because her husband was busy. Apparently he was indeed occupied, but that’s not why he didn’t come. They’re barely together. The juiciest item, though, is about an actress who refused to sit next to seat filler at probably the Emmys. A lot of people seem to think this is about Julia Roberts, which is a fun thought.

Justin Bieber’s Brush with the Law of the Week: Alleged Robbery

What will it take to get Justin Bieber deported? The latest entry to his truly impressive catalogue of police incidents is a robbery investigation resulting from an altercation with a fan at … Dave & Buster’s. Bieber was allegedly hanging out with his on-off girlfriend Selena Gomez. A fan took photos of them, which allegedly incited him to attempt to steal the fan’s phone to delete the photos. TMZ reports that Bieber’s security team held him back, and he then quickly left. In addition to the potential robbery charge (stealing the camera phone to delete the photos), he’s also being investigated for battery and theft (stealing the photos from said phone). Remember, a conviction would violate his probation, to which he was sentenced for egging his neighbors’ homes. If these incidents are not enough to get this delinquent sent back to Canada, I’m not sure if anything will.

He probably thought a night at Dave & Buster’s was less likely to get him in trouble than 1Oak, where he was witness to the Suge Knight shooting. But maybe the venue is not the problem. Bieber finds trouble everywhere. The day after the camera phone incident, he was driving his red Ferarri in West Hollywood and got rear-ended. Perhaps the issue here is that the hideous shoes he was wearing impeded his driving. Seriously, shoes that ugly should not be street legal. Imperiled Celebrity Relationship of the Week: Scientology and Its Biggest Stars

I’m terrified of both Tom Cruise and the Church of Scientology’s lawyers, so let’s get straight to the facts. The New York Daily News reports that the Church is casting unknowns to appear in their commercials because their former strategy of casting Tom Cruise and John Travolta has not led to increased membership. This seems like a curious time to minimize Cruise’s Scientology visibility. Some people think his cultural currency may be on the rise thanks to Edge of Tomorrow, which may not have been a blockbuster but was well-received. Here’s something else to consider: Notorious rumors website Crazy Days and Nights has a very vague item about an “A+list mostly movie actor” who says “he and this organization have parted ways.” Many commenters have guess the actor in question is  Tom. Many have also guessed John Travolta.

All right, let’s leave it there.

Jennifer Lawrence and Chris Martin Update of the Week: The Music Flows

Us Weekly (via The Daily Mail) reports that Chris Martin and J-Law carry on. The magazine claims, “He writes her songs and loves taking her to private romantic spots … Chris is sweeping Jen off her feet. That’s his thing.” When is that not a guy’s “thing”? Is impressing a woman you’ve just begun to date ever not the goal? And if you play guitar, is there any other viable strategy but to play music for her? So, good work, Chris Martin. You’re doing it right.